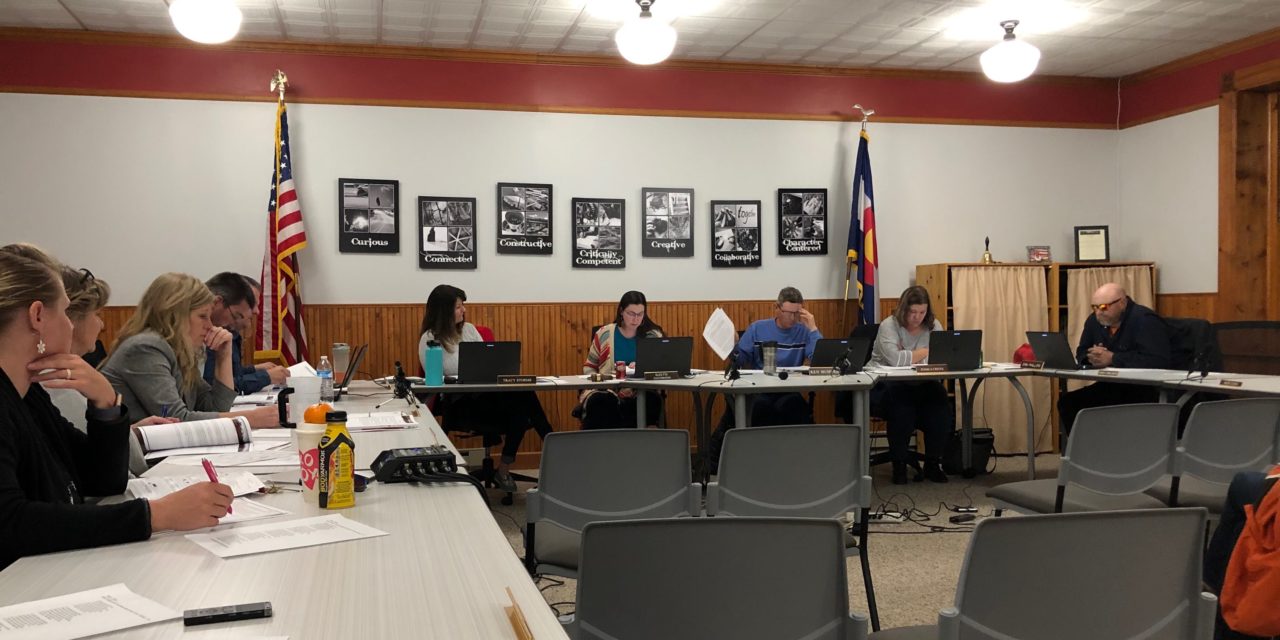 The Buena Vista School District’s Board of Education met for their regular meeting on October 11. The principals’ reports led the meeting, focusing on students’ connections in school and between classes.

Stephanie Glaser, a Language Arts teacher at BV Middle School, discussed how students in her World Cultures and Literature course have been engaging with other cultures through literature exploration, field trips, and even a class connection with a group of high school students in Beirut, Lebanon.

“From the beginning, my whole goal was keeping our kids connected and broadening our community and making it a global community,” said Glaser. “So, being aware of and engaging with the needs in the surrounding community I extended to basically the world and to whatever country we were connecting with at the time.”

Emily Madler, principal at Avery Parsons Elementary, talked about connecting learning to various situations and relationships outside the classroom, from a fourth-grade field trip with Greater Arkansas River Nature Association (GARNA) to first graders exploring engineering and geography trivia in the lunchroom. Christine Bailey, principal at Chaffee County High School (CCHS), discussed the school’s Discovery program, which runs through the first five weeks at CCHS for every student.

Jon Ail, principal at BV High School, also spoke about connecting classroom learning to the real world. A class of BVHS students recently spent a day with young learners at The Grove, sharing their own knowledge from their various classes with the preschool students. The visit, part of their Civics class, gave the students a chance to connect across the district as well as connecting their classroom learning to authentic situations.

Superintendent Lisa Yates discussed requests for proposals for the district’s surplus properties, which were due on Oct. 11, and said the board would hear more from President Suzette Hachmann and Treasurer Jessica Crites on the proposals before the next meeting to discuss them further. She also took a moment to thank the community at large for their support of the district throughout the past two years.

“It feels like public education is under attack, and I feel like our community has come across well, had good conversations with us individually or just advocated in ways that have been very civil and respectful,” she said. “I know there are other boards of education that have had some very difficult encounters with their community, and I just think it’s the investment that you all have made with the community that feels like they can come and speak without having to make large controversies out of things.”

While there were no updates from the Board of Cooperative Educational Services ( BOCES), the Maintenance Subcommittee, or the Facilities Committee, board member Erik Phillips said he received some negative correspondence regarding the Healthy Kids in Colorado survey conducted by the district. Yates explained that the survey is optional for all students and that they had more opt-outs this year than in the past. The middle and high school principals and counselors will meet later in October to discuss how they’ll proceed with the results.

During the allotted time for public participation, Doug Constance, the only commenter, asked the board whether they or the Colorado Association of School Boards (CASB) would be making a statement on the National School Board Association’s letter to the Justice Department and President Joe Biden. The letter, sent earlier this year, requests government support in investigating and preventing “threats and acts of violence against our public school officials.”

“Some state school board associations have issued statements distancing themselves from what the NSBA wrote to the Attorney General, and the states that have spoken up so far have emphasized that they want relationships between school boards and their constituencies to remain local and under the jurisdiction of local law enforcement if any threats or assaults need to be addressed,” Constance said. “What I wanted to find out is if you’ve contemplated having any contact with the Colorado School Board Association encouraging that entity to issue a similar statement.”

Board member Ken McMurry, who was standing in for the absent President Hachmann, said that while the board didn’t have an answer at the moment, At-Large member Brett Mitchell would be attending an upcoming CASB conference, and the board would have more information soon.

The board also filed the meeting minutes from September 27 for approval with one minor change, editing “prom” to “homecoming dance” in one board member’s statement on their excitement for Homecoming Week. The board also unanimously approved their consent agenda.

The board also heard a Memorandum of Understanding (MOU) on working with Sangre de Cristo Electric (SDCE) on the purchase of a new electric-powered school bus. The bus would be paid for by the district, then the cost would be reimbursed by the Alternative Fuel Vehicle grant from the Regional Air Quality Council. After a thorough discussion with the board and Transportation Director Tony Stromer about SDCE’s support in building charging stations, potential long-term costs, and ongoing operational unknowns, the board voted to move forward with the MOU.

In her update on the districts’ ongoing recovery from the pandemic, Superintendent Yates shared that while other districts are struggling with quarantines and returning to in-person learning, “it feels good for us to at least have some consistency right now.” The board closed on this note, with no unfinished business or board evaluations. The meeting adjourned at 8:35 p.m., and the next regular meeting will be held on Monday, October 25, at 6:00 p.m.