The Buena Vista School District (BV Schools) will add an electric school bus to its daily route schedule in 2022 at no cost to the school district. The bus will be the first vehicle-to-grid (V2G) installation in the Sangre de Cristo Electric Association (SDCEA) service territory.

Acquisition of the bus is thanks to a successful grant application by the district and a significant financial contribution as well as technical support from SDCEA.

“The bus brings an important opportunity to learn not only about the performance of an electric bus in our mountain valley, but also a chance to learn if this technology could help SDCEA going forward in leveraging large-scale batteries for power management in the future,” said SDCEA CEO Paul Erickson. “We look forward to our ongoing partnership with the district on this project.” 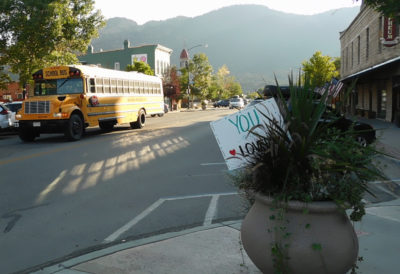 Signs placed about the Buena Vista community Aug. 27 provide some sentimental words about heading back to school. Photo by Tara Flanagan

Funding for the Alt Fuels Colorado Program comes in part from the state of Colorado’s settlement with car manufacturer Volkswagen Group of America regarding their over-the-limit auto diesel emissions.

SDCEA has announced that it will contribute $100,000 to cover the remaining costs of the bus, charging station, and electrical infrastructure to provide power to the bus.

“This partnership with SDCEA is a tremendous way to help modernize the district’s bus fleet. The bus will also promote education about emerging technologies and bring environmental and health benefits to students, as well as to our community,” BV Schools Superintendent Lisa Yates said.

An electric vehicle V2G installation allows for energy to flow either to the vehicle being charged, or back to the grid during periods when the vehicle is not going to be driven. Under the BV Schools bus V2G scenario, the bus can be charged during hours that are less expensive for SDCEA to purchase wholesale power, primarily during daylight hours when less-expensive renewable power is generated, and late at night when demand for electricity is low.

SDCEA then may be able to discharge bus battery power back into the grid, when it isn’t needed for bus operation, to offset consumer power use during high-demand, more-expensive wholesale power cost periods. That timeframe is identified as the hours between 5:00 p.m. and 10:00 p.m. each day.

Because of the V2G installation, the school district will be able to take advantage of a more favorable electric rate to recharge the bus during off-peak hours. It is expected that this will result in a monthly electricity cost comparable to that of diesel fuel, but with much lower pollution rates.

Mountain municipalities are begging to shift to electric vehicles (EVs) as well. Over in Eagle County, the town of Vail announced in the past few months that it is transitioning its municipal vehicles to electric power. Most Colorado counties are applying for transportation and energy grants to install more EV charging stations.