The Buena Vista (BV) Board of Trustees (BoT) held their regular meeting on December 14, with a packed agenda, followed by an executive session that did not begin until 9:50 p.m. The agenda included a resolution on the preliminary plat for Phase II of South Main.

The first business item of the night centered on South Main, Phase 2. JJ Kinsfather, representing The Town Company, LLC, spoke on the ongoing growth of Buena Vista and the potential for South Main’s growth and development.

“We’ve been through a variety of ups and downs, but slowly but surely we will work to complete our vision,” Kinsfather said. “And it’s really turned into the place we hoped it would be, and so we’re very excited to get into the next phase of the project.”

Phase II would create 20 buildable lots, 7 outlots, and two tracts, with the outlots not available for development until they go through their own subdivision at a later date. The lots, many of which are mixed-use, will be used for housing and residential developments, as well as retail and restaurant use. Additionally, Phase II includes realigning Ramsour Road and paving River Park Road into Arizona Street. 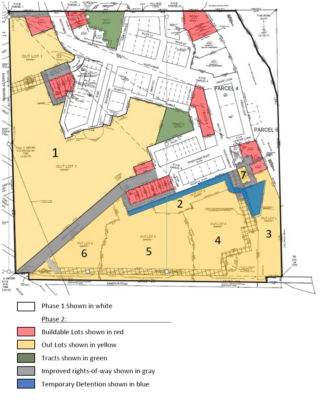 Principal Planner Mark Doering added that in addition to the approval of the preliminary plat, the Board of Trustees must also approve a Public Improvements Agreement (PIA) with The Town Company, LLC. Per the report, town staff and the Planning and Zoning Commission recommend that the board approve the Phase II Preliminary Plat and the Final Plat upon finding the plat in compliance with the Buena Vista Unified Development Code.

The Buena Vista Dry-Year Water and Development Dashboard shows that there are 513 units of water “available.” The Phase II development would utilize 20 of those units.

Two South Main residents submitted a comment that Phase II will further frustrate parking issues and that a reasonable accommodation would be including planned lots as part of Phase II. Mayor Duff Lacy added that the hotel is an added impact on parking. Per Doering, the hotel is also allowed to use on-street parking to meet its off-street parking needs.

Mayor Lacy also asked what happens if certain deadlines are not met, and Town Attorney Jeff Parker clarified that the town has the right to withhold building permits until the developer can complete what’s required, and the Public Improvements Agreement (PIA) gives the town security to complete the PIAs if they are not completed by the developer.

Trustee David Volpe asked for some of the history, and Doering said that when the PUD was approved in 2005, requirements were set in place for the development of the property with a vesting period of 15 years, which has expired.

“We’ve been working with the applicants to get them to this point where they can make a second phase, and then discussions have been that after Phase II, we will have a big conversation about the PUD for Phases III, IV, V, and VI,” Doering explained. “We are trying to get this done so we can see further development, and then have a big conversation about the development that follows.”

Parker clarified that during a vested rights period, the town cannot change its zoning rules or land-use rules in a way that would negatively impact the already-approved development.

Trustee Libby Fay also posed a question about putting in public restrooms in the South Main area. Planning Director Joseph Teipel said they are trying to avoid a piecemeal approach to approval and future phases.

“From a policy standpoint, we’re saying, ‘Phase II, let’s get that going,’” said Teipel. “‘We recommend its approval with these conditions.’ We want to then say, ‘Let’s work with the applicant to address these other issues prior to moving forward with other phases.”

“There are always issues that come up with this, but it’s a beautiful project,” Trustee Fay said.

Mayor Lacy commented on how lucky BV was to have the development at that time.

The board also moved to approve the resolution for the Public Improvement Agreement with the Town Company, LLC, for Phase II. The resolution was passed unanimously.