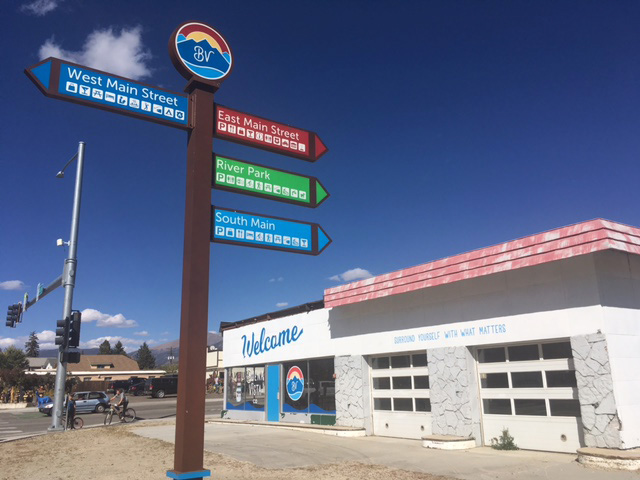 Things like this have a way of being cute. Or historically noteworthy, or at least functional.

The old Texaco building that sits at the entrance to Buena Vista’s downtown hasn’t checked any of those boxes for nearly two decades, and now it’s slated to go away, with something far more aesthetically pleasing and appropriate planned in its place.

The Board of Trustees unanimously passed a pair of resolutions Monday evening Oct. 26 that effectively hands over the project to The Town Company, LLC (South Main), which will raze the building and remove debris including underground tanks. The property is owned by SPP Investments, LLC of Tucson – an entity commonly controlled with South Main. It will lease the space back to the town for $5 per year in five-year increments.

Per the Town’s parlance, an “architecturally desirable” building will very likely eventually occupy the space. But for now the plan is to create a “parklet” setting that welcomes people into the town’s core. The town will retain architectural review over any building that is placed on the site.

“This is a really big step, really,” said Mayor Duff Lacy. “It’s going to be good for town.”

The resolutions cover the lease between the Town and SPP Investments, as well as a measure that excuses South Main from building a roundabout at the intersection of East Main and South Main.

When The Town Company created the South Main development, one of the provisions with the Town was to contribute to the installation of a roundabout at East Main and South Main streets. But since it does not look like a roundabout will be necessary in that location, that money will be used to improve the Texaco site.

The original idea was to build the roundabout when the third phase of the South Main project came about. The first phase is just now nearing completion. Meanwhile, the Town built a T-intersection in 2014 to accommodate traffic. By all accounts, that intersection appears to be functioning well.

Trustee Amy Eckstein suggested that the Town consult with a professional designer to create a cohesive look with improvements at McPhelemy Park across the street. “To just make sure that corner is really excellent,” she said. “I think that would serve us well.”