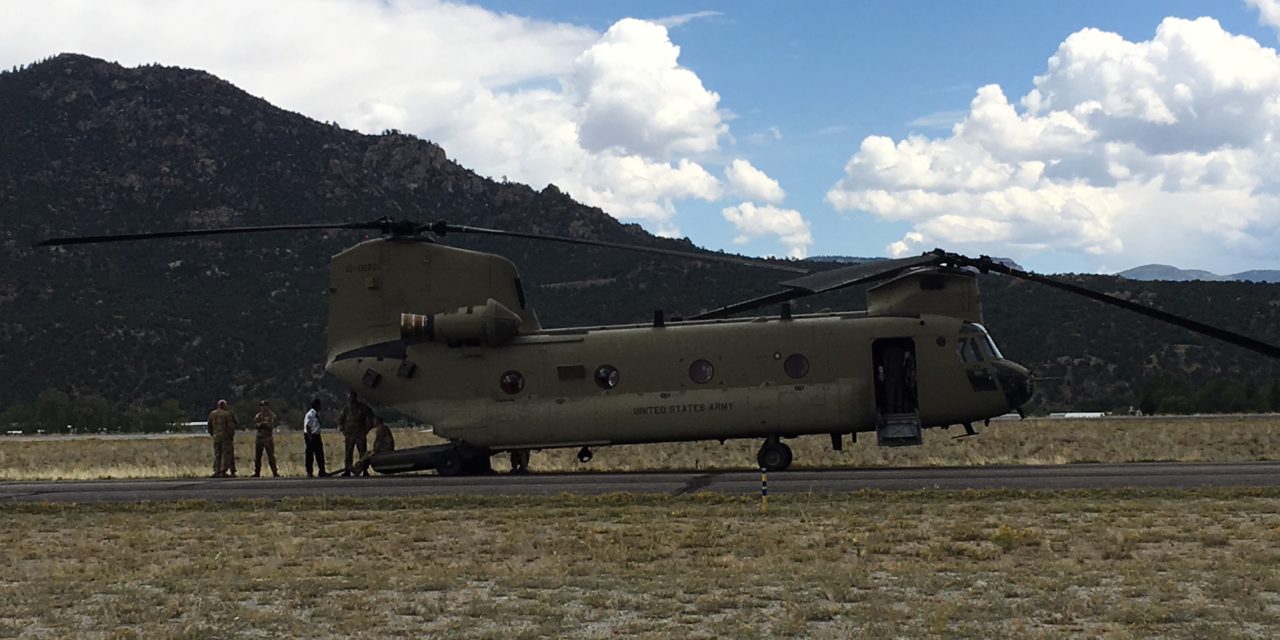 Residents and officials of the town of Buena Vista turned out to welcome representatives of the Colorado High-Altitude Army National Guard Aviation Training site, known as HAATS, as they roared into the Central Colorado Regional Airport in Buena Vista on Thursday. They dropped in on BV in six military helicopters: four Black Hawks, one Chinook and one Lakota. While fixed-wing craft are a common sight, the size and number of military helicopters created quite a stir.

The group of around 50 members of various branches of the U.S. Military, as well as a few foreign countries, settled their helicopters and were treated to lunch at the airport hangar offices, before heading back to Eagle County Airport. This class was just one of the 35 or so high altitude training classes totaling around 300 pilots, conducted by HAATS each year.

“We like coming over here with our training classes. This is a high altitude location, and since most of our training is done in the White River National Forest, this provides different land terrain and winds,” said Chief Warrant Officer Five Sergeant Patrick Gates. “It’s good for our students to deal with different types of turbulence due to terrain.”

“The high altitude training is for U.S. Military helicopter units, as well as our partners,  designated through the Department of State,” said Major Nicholas Tucker, in charge of the group that dropped in on BV.

“Over the past few years we’ve had Israelis, Saudis, the Jordanians, the Germans … on this trip we’ve got the Naval Aviation Warfare Development Center (NAWDC) along and the Tunisians,” said Tucker. “To be part of a class, they have to request what we call ‘a training seat’ and our quota [of trainees] is full.”

Tucker explained that the mountainous training area reinforces what the Army refers to as it’s Power Management process, providing rough terrain training at altitude to achieve ‘situational awareness.’ “It’s the only Department of Defense aviation school that trains pilots to experience this outside the classroom,” he added.

The Army established the Army National Guard Aviation (ARNG) training site in 1986 in Gypsum, near Vail, sited at the Eagle County Airport. While the training literature refers to HAATS as “a unique training methodology based on aircraft power that is designed to dramatically increase individual and crew situational awareness,” Tucker was more direct.

“Some one-fifth of any accidents are caused by our management; related to power management [of the helicopter]. Our goal is to reduce accidents and to get the maximum use of our vehicles. We can’t do that without knowing what they can do – pushing pilots and equipment to learn their limits.”

On a tour of the helicopters, Gates explained that with modern military conflicts in rugged Middle-east terrain, training in power management in the mountains of Colorado is useful for honing pilot’s skills. Many of the pilots that come to train in the HAATS classes are preparing to be part of mobilization sites. 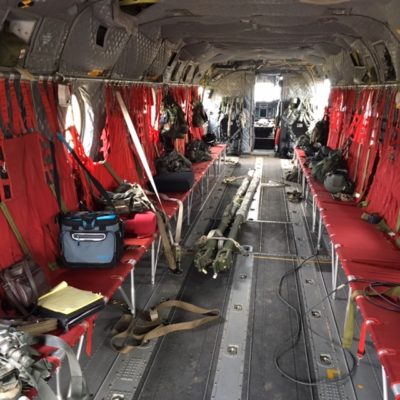 “Known as a ‘workhorse,’ the interior of the Boeing CH-47F Chinook can hold 35 on seats, more than 50 on the base when seats are up and have been known to haul people, equipment and rescued animals. (Photo by Jan Wondra)

The ARNG is also called on to participates in high altitude extractions, one of four teams in the state standardized to work with civilians on rescue missions. Gates said this cooperation has become more common as climbers over-estimate their ability to handle the terrain they set out to climb. He cited a recent rescue of climbers on 14,075 ft. Mt. Missouri; experienced mountaineers, who had gotten in trouble.

A typical HAATS training class will include anywhere from four to eight helicopters. The largest of the helicopters during the visit at the airport was the Chinook.

The Boeing CH-47F, first introduced in 1957, is one of the longest-serving products in the U.S. Military. It’s also considered to be one of the fastest.

“This one is a workhorse,” said Gates during an interior tour of the Chinook. “It can carry 500 pounds of fuel that at high altitude, allowing it to stay up for five-hour stretches. It’s multi-purpose. It’s set for 35 seats right now, but the seats can fold up, and we can carry 55 people sitting on the floor. When we do rescues and evacuations, we’ve carried all kinds of animals, equipment and people. When we get called to help with things like wildfires, the three hooks underneath the belly can haul equipment or drop water. The center hook can hold 26,000 pounds, and the hooks either side of that can each hold 17,000.

Airport Manager Jack Wyles, who says he’s pleased the airport meets training standards, confirmed that he expected HAATS training classes to be coming in every Thursday for the rest of the summer.

Gates said the HAATS class in Buena Vista arrive and return, over Hagerman Pass (elevation 11,925 ft.) making the trip between Buena Vista and Gypsum a short distance of 60 miles. Last Thursday, summer thunderstorms were moving in over Mt. Princeton as the time arrived to depart.

He turned around and surveyed the view and the weather. “This is good training terrain. We’ll spend lots more time here.”