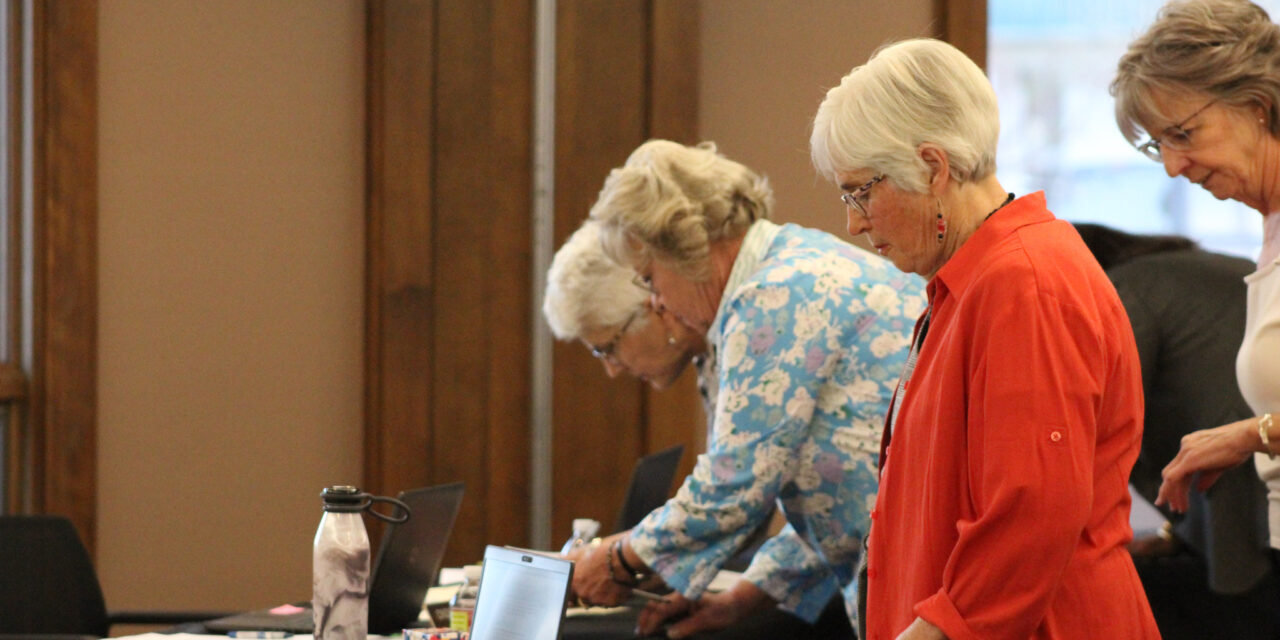 At their regular meeting on Tuesday, April 26, the Buena Vista Board of Trustees welcomed and swore in their new and returning trustees and mayor, and thanked the departing Trustee Dave Volpe and Mayor Duff Lacy for their service.

“Dave, we appreciate you,” Mayor Lacy said as he passed Volpe a plaque in recognition of his service, keeping it short and sweet. 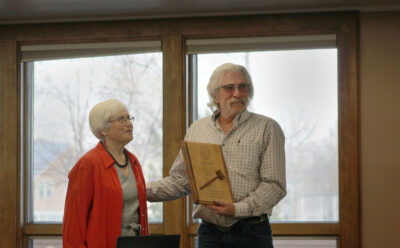 “Duff, we’re really going to miss you,” Libby Fay said as she passed Lacy his own plaque. “You’ve been a trustee for eight years and mayor for four, and in that time good things have happened…You’ve given us a lot.”

“None of it could have happened without what you see here,” Lacy said to Fay of his time in office. “Staff is incredible. If you listen and pay attention, they can guide you, they can help you out. I appreciate all of you very much. Thank you.”

Lacy and Volpe were thanked with enthusiastic applause from attendees and stepped aside as their successors came to take their own oaths of office.

Incoming trustees Sue Cobb and Mark Jenkins, returning trustees Cindie Swisher and Gina Lucrezi, and incoming mayor Libby Fay took the floor next to be sworn in, with Jenkins joining on Zoom. After signing their paperwork, the officers took their seats behind new nameplates, and Fay continued the meeting as Mayor. The board also voted to appoint Trustee Lucrezi as Mayor Pro Tem. 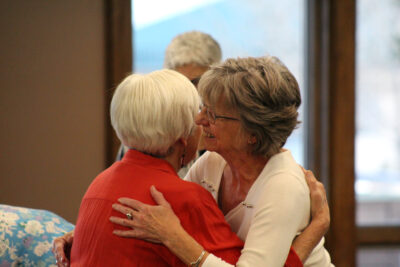 Jean Buster of the League of Women Voters spoke during the portion for public comment, commenting on the town’s history of women leadership and thanking the board for their contributions toward democracy. Fay is the town’s fourth woman mayor since Buena Vista’s founding.

“Lou Wade, in 1894, one year after Colorado women won the right to vote, she became a council member … The town has had only three previous female mayors,” she said. “Often, until the last ten, fifteen years, nearly all trustees were men.” 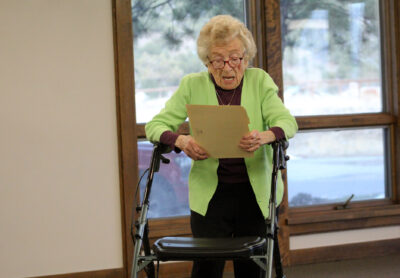 Jean Buster of the League of Women Voters speaks about the town’s history of women mayors and trustees after the swearing in of Mayor Libby Fay and Trustees Sue Cobb, Cindie Swisher, and Gina Lucrezi at the board’s April 26 meeting. Photo by Hannah Harn.

“This upcoming council and its mayor will make history,” she continued. For the first time, nearly all elected representatives from Buena Vista will be majority women…Tonight, we’re recognizing some history.”

The board went on to reappoint Phillip Puckett as Town Administrator; Hoffman, Parker, Wilson, and Carberry, P.C. as the Town Attorney; Paula Barnett as Town Clerk, Michelle Stoke as Town Treasurer; and Judge Brian Green as Municipal Court Judge. Planning Director Mark Doering also announced that he would be stepping down from his job and would be moving.

The board will hold its next regular meeting on Tuesday, May 10, 2022, at 7:00 p.m. The board is still looking for an additional trustee to replace former trustee Norm Nyberg, who stepped down earlier this year to work for the town. The Board of Trustees will make the appointment to fill the vacancy at their regular meeting on Tuesday, May 10, 2022, after receiving presentations from the candidates that evening.