Today, Nov. 18, U.S. Senators John Hickenlooper and Michael Bennet are celebrating the bipartisan committee passage of their bill to establish Camp Amache as a National Historic Site. The Amache National Historic Site Act passed out of the Senate Energy and Natural Resources Committee and now heads to the full Senate to become law.

“Amache is a warning of what happens when we give in to hate and fearmongering,” said Hickenlooper, who is a member of the U.S. Senate Committee on Energy and Natural Resources which approved the bill. “Learning from this tragedy is the best way to ensure we never repeat it.”

The Amache internment camp housed more than 7,000 U.S. citizens of Japanese ancestry, forced to leave behind their homes and jobs during World War II. What amounted to an American concentration camp is located in southeast Colorado, about a mile west of the small farming community of Granada, south of U.S. 50. 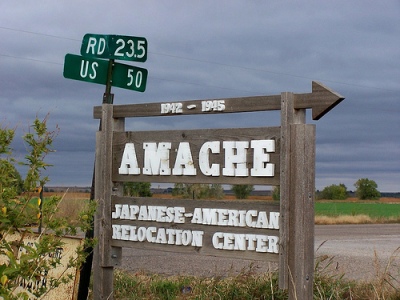 Image of the current sign for the Amache internment camp. Image courtesy of “Traces of War.com”

“It has never been a guarantee that America’s highest ideals will always prevail. Our country’s forced relocation of Japanese Americans to incarceration facilities like Amache in Colorado during World War II proves that” said Bennet. “Our bill to add Amache to the National Park System will preserve its story and help ensure future generations can learn from this dark period of our history. Today’s vote was a huge step forward – and I’ll keep pushing to get this bill to President Biden’s desk.”

“Today’s vote speaks to the strong bipartisan and grassroots legacy of Amache. We applaud the leadership of Senators Bennet and Hickenlooper and the enduring voice of the Amache community. As America’s storyteller, the National Park Service can preserve places like Amache that challenge us all to act toward a better future where justice, equity, diversity, and inclusion are America’s top priority,” said the National Parks Conservation Association Colorado Senior Program Manager Tracy Coppola. “Time is of the essence. We urge Congress to keep the momentum going and look forward to swiftly getting this bill through the full Senate and to President Biden’s desk.”

“Today’s vote on the Amache National Historic Site Act in the Senate brings me hope and I thank Senators Bennet and Hickenlooper for their leadership. I now urge the full Senate to pass this bill. The time is not only right; it is long overdue,” said Amache survivor Bob Fuchigami.

The Amache National Historic Site Act, which Hickenlooper and Bennet introduced in April, would help honor those who were imprisoned by preserving the site’s history and educating future generations.

In 2018, Bennet introduced the Amache Study Act, which directed the Department of the Interior to conduct a Special Resource Study (SRS) to assess Amache’s historical significance and determine the feasibility of adding the site to the National Park System. The act was signed into law in 2019 as part of the Dingell Conservation Act.