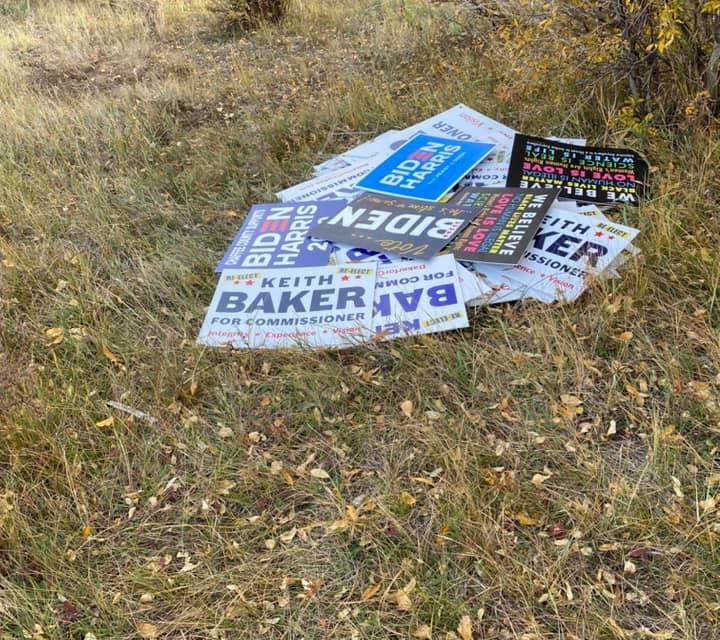 As the Nov. 3 election draws closer, vandalism of yard signs is increasing in Chaffee County. A pile of signs found at the Cottonwood Creek nature area on CR 361 just off CR 306 is but the latest example of sign theft; representing a real attempt to silence people’s First Amendment right to free speech.

The theft and vandalism don’t appear to be exclusively the signature of either the Democratic, Republican or Libertarian parties. But it does appear the majority of instances are primarily aimed at messaging by the Democratic party candidates and the Black Lives Matter social justice message.

A Hannah Hannah campaign sign at CR 270 and U.S. 24 appears to have some spray paint on it. However, far fewer reports have been lodged regarding the loss of Republican campaign signs than those reporting Democratic sign vandalism.

Dennis Heap is a member of the Chaffee Republican party but not an official spokesperson.  In his opinion, he thinks the picture and the narrative are a setup to make Republicans look bad. According to Heap, signs that are stolen would go into a trash bin, not be left beside the road for a photo opportunity. “Further, I am aware of property damage being done to Trump supporters, whereas I am not aware of property damage to Biden supporters. The Chaffee County Republicans have put up seventy 4’x8′ Hannah Hannah signs in the county, many of those signs I personally installed, and [others] I haven’t installed; four that were cut down.

“I’ve condemned this type of activity in the strongest possible terms; doesn’t matter what party you’re for,” said Keith Baker, who is running for reelection to Chaffee County Commissioner. “I have twice denounced this on my Facebook page and stated I don’t want anyone doing it on my behalf. I said it in the Ark Valley Voice Candidate Forum last week.”

“Interestingly, I am aware of several Trump yard signs that were taken, but they left the Hannah sign,” added Heap. “I agree wholeheartedly that such behavior violates the First Amendment, which protects free speech and it is beneath the professional endorsement of a political party. However, I think you are pointing at the wrong party.”

In some cases, the signs no more than go up, when they are stolen. Frederick Lee says that he put up a sign supporting Baker’s reelection and the Biden-Harris ticket on his property on CR 350, two miles west of Buena Visa on Oct. 8. “The theft and vandalization took place between 7:15 p.m., when I left to do grocery shopping and saw the signs standing normally, and 8:00 p.m. when I returned to see one missing and the other toppled,” wrote Lee.

It appears that the Chaffee County Sheriff’s Office is responding quickly when reports of stolen signs have occurred. Lee noted that he was grateful “for the quick, courteous and highly professional response of Deputy Jess Sanderlin yesterday evening to my report of the theft of a campaign yard sign and the vandalization of a larger campaign sign on the property.”

Democratic Party organizer Bill Baker, says there have been a substantial number of  Democratic party signs stolen or destroyed. At least 53 campaign signs for Keith Baker have been stolen, plus signs for Biden-Harris and John Hickenlooper have been stolen from people’s lawns and property. Another large cache was recovered from near the Midland Tunnels.

“You can’t blow this off and say this is just kids,” said Bill Baker. “I believe this is directly the result of the leadership of the Republican party encouraging their followers to demonize and attack their political opponents. Every single Republican who remains silent is complicit in this.”

“Yard signs and 4’X8′ signs can be replaced and re-installed, but I don’t think that is the issue we should be looking at,” said Heap. “Why is there so much division and hate among Americans? Why is so much time spent on making those that think differently look bad?”

That appears to be a question that “We the people” need to have answered sooner rather than later.

Editor’ note: The featured image is one example of a recent sign vandalism. This pile found along CR 361 just off 306, contains campaign signs for Chaffee County Commissioner Keith Baker, the Biden-Harris presidential ticket, and Black Lives Matter posters. Image by Will Barrett.