Many who come to the Arkansas River Valley for rafting, hiking, or biking, may not know that it is also the home of the Captain Zipline Aerial Adventure Park. A recreation entity whose reputation has spread around the globe. While building a zip line empire, the park’s offerings often are used to raise money for worthy county nonprofits, such as the one planned Sept. 15  to benefit Calliope.

Visitors are quick to tell you why the aerial adventure park stands out.

“It was totally wild,” said Chantelle Marriott, visiting Captain Zipline, from Brisbane, Australia. Marriott said she had previously done an Australian aerial park set up in treetops, but added that the Captain Zipline park was much more extensive and technically challenging. 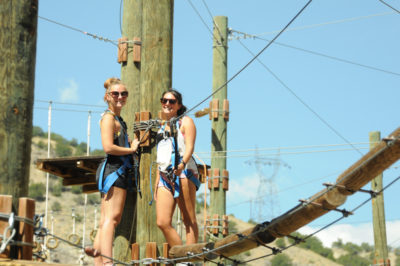 Her friend Suzy Brown, visiting Chaffee County from Edinburgh, Scotland, agreed about the experience in the most extreme terms she could think of, “Yes –this was absolutely mental.”

Since its opening in 2005, Captain Zipline, which is owned by Monty Holmes, has racked up accolades for its quality and level of adventure. It has been named one of the six best zip line tours in the USA by Outside Magazine.

USA Today named to one of the top 10 Zipline Attractions in America. It is listed as one of the top 10 zip lines in the world by National Geographic Traveler Blog. Recently Men’s Fitness Magazine added it to its top 20 Adventure Vacation Destinations on the Continent. 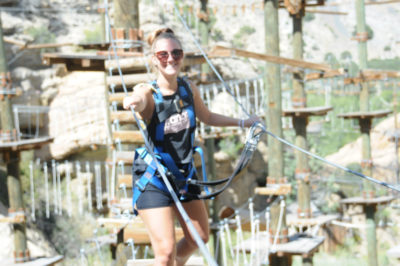 The adventure center has multiple ropes courses, gauged for many skill sets. Captain Zipline employee guides to help visitors should they need help to get through the courses.

On some courses, the adventure rope routes are suspended up to 40 feet above the canyon floor.

“While zip-lining looks extreme, it is actually relatively easy to do,” said Holmes, who is particularly proud of his Lost Canyon Zipline Tour. “It’s a Colorado eco-adventure. Not only will you experience heart-pounding, leg-shaking thrills — you’ll soar across ancient canyons. You’ll  learn about the history, flora and fauna of this beautiful, fascinating area.”

Holmes says the Canyon Aerial Course (CAC) is “a high ropes structure” tucked into the Lost Canyon, surrounded by rugged limestone cliffs. It was designed and built by Swiss Alpine engineers to industry standards, including those of the Association for Challenge Course Technology (ACCT). 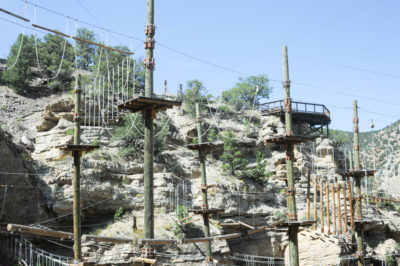 The CACC consists of more than 120 interconnected “challenge elements.” They include winging bridges, cargo nets, balance beams, tunnels and more. The 120 elements are broken into nine different course routes, offering continuous variety during a day of challenges. Each route consists of eight to 13 elements, and every zip line graded for difficulty much like a ski area.

Holmes says that before entering the Canyon Challenge course, visitors are fitted with safety gear; and given a safety briefing and instructions. Guests begin on easy courses and graduate to more challenging routes. Once a course is completed, guests can proceed to more challenging courses.

Captain Zipline is hosting a fundraiser to benefit Calliope on Sept. 15 at 1 p.m., with $20 per person of entrances fees for all Caption Zipline Adventure Park visitors going to benefit the youth nonprofit.

Calliope is a youth art and drama nonprofit based in Chaffee County that teaches youth, ages 6 through 18, in musical theater arts. The group puts on musicals throughout the year, most often musical comedy productions.

“Our last three productions were such fun for the children,” said Calliope Director Jerri Lines. We did Elf, Jungle Book and Beauty and the Beast. Next up, we are going to be doing Ariabella this coming winter season, in January or February.”

Funds raised from the Sept. 15 event will be put toward the next Calliope 2020 winter production. To book a spot to participate in the Sept. 15 fundraiser supporting Calliope, call 719-207-4947.

Those planning visits to Chaffee County can view photos and course descriptions at the Captain Zipline website at www.captainzipline.com.