Cases of COVID-19 Variant in the U.S. Rise for the First time since Mid-January

This news we don’t want to hear, but here it is. As of this week, the seven-day average for new COVID cases in the U.S. has risen, fueling fears that the Omicron BA.2 variant, which is behind rising case rates in European countries, may be about to begin a march across America.

Several states in the Northeast and the South have seen cases increase over the past two weeks as the BA.2 subvariant of the Omicron variant has emerged. They include New York, Connecticut, and Arkansas, where cases are up 20 percent.  This runs counter to most states, where case levels are now at their lowest rate since July 2021. Here in Colorado, cases are up slightly but remain below the five percent threshold that would indicate a spread.

Around the globe though, things are a bit different. Just last week according to the World Health Organization (WHO), global weekly cases of COVID-19 jumped 42 percent in one week, with the biggest rise in Europe. Recent history has shown the U.S. to be around four weeks behind European case statistics.

While most of us would just as soon wish that we never hear news of COVID again, the truth is that cases are continuing to be diagnosed, people are still being hospitalized with it, and people are still dying of COVID-19.

In a country of more than 330 million people, fewer than 1,000 deaths are currently being reported each day. This is the lowest daily average since before Omicron took hold. But consider: more than 970,000 deaths have been attributed to COVID-19 in the United States since the beginning of the pandemic.

The death rate from COVID caused the largest drop in U.S. average life expectancy since World War II. According to the Center for Disease Control (CDC), life expectancy in the United States declined by a year and a half in 2020 and the COVID pandemic is to blame.

The pandemic contributed to 74 percent of the decline in life expectancy from 78.8 years in 2019 to 77.3 years in 2020, according to the CDC’s National Center for Health Statistics.

At the current death rate, the U.S. will pass one million deaths from COVID by around April 26. Consider that for a moment. One million people wiped off the face of the earth in one country, in a little more than 25 months. 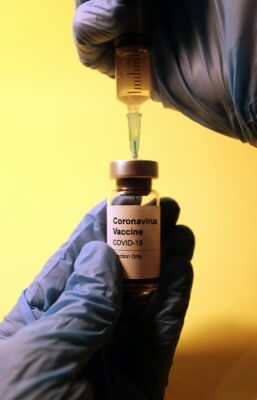 As of March 27, 2022, a total of 11,054,362,790 vaccine doses have been administered across the world. While this is encouraging, it is not nearly enough, meaning the virus is still at play in major areas of the world, mutating merrily along.

Here in the U.S., what should grab people’s attention is the difference in death rates between red America (Republican-leaning) and blue America (Democratic-leaning): According to a Pew Research study, political polarization dramatically impacted not just vaccination rates, but people’s cautionary behaviors especially in self-isolating if exposed or mask-wearing. In fact, cumulative death rates have been 30 percent higher in red states, than in states that lean blue.

An ABC News analysis of federal data found that on average, the death rates in states that voted for Trump were more than 38 percent higher than in states that voted for Biden, post widespread vaccine availability. According to polling from KFF, as of February 2022, just 56 percent of Republicans are vaccinated, as compared to 70 percent of Independents, and 92 percent of Democrats. In addition, a third of Republicans reported that they definitely would not get vaccinated.

The fact is this: the COVID-19 pandemic is not over. It is purring along, laying low, allowing us at least a temporary sense of what normal feels like. For that, we are all relieved.

But while we are spreading our wings, venturing out to restaurants again, attending in-person meetings, planning that summer vacation, the COVID-19 virus is likely quietly mutating. Where and when it will surface is unknown; it may be as this BA.2 variant, or it may be some other mutation that hasn’t yet occurred.

A virus this powerful shouldn’t be underestimated. If or when there is a next time here in the U.S. — we shouldn’t be surprised. We should be prepared. The question is — will we be?