The Chaffee Board of County Commissioners (BoCC) held their final regular meeting of the year on Thursday, December 15, running through a consent agenda, a few contract approvals and approval of the 2023 county budget (covered yesterday in this news story) as well as reviewing two new major subdivision sketch plans.

It was announced that the meeting originally scheduled for Tuesday, December 20 has been canceled, and their next session will be the first meeting of the new year: beginning at 9:00 a.m. January 3, 2023. That meeting will include consideration of at least five county resolutions concerning land development plans (from recent BoCC reviews and the two below) allowing planning to proceed.

Zoned residential, the parcel subdivision request would divide the nine acres into nine lots ranging in size from .5 acres to 1.36 acres, with a connection to the Buena Vista Sanitary Sewer, but with individual wells proposed for each lot. Building envelopes have been planned to avoid the steep slopes and the 100-year floodplain of the Arkansas River.

BoCC discussion centered on the need for planning care to address the steep slopes, clarifying questions about the 100-yeare flood plain, requesting verification of the development’s access road. The motion to prepare a resolution for review on January 3, 2023 that would allow site planning to continue based on the sketch plan provided was made by Commissioner Keith Baker, seconded by Commissioner Rusty Granzella, and passed unanimously. 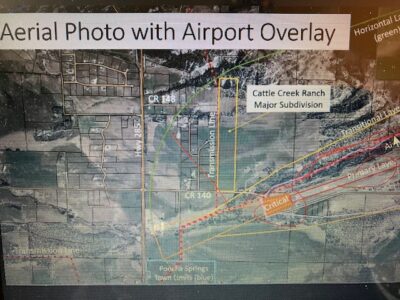 Members of the BoCC expressed some concern that the proposed open space which at this point is just a large easement without activity limitations, is also a major drop-off from the mesa. The subject of requiring that Colorado Parks and Wildlife weigh in was raised.

“Sometimes open space is not a big thing, but in this case, it seems like that kind of area should have a plan,” said BoCC Chair Greg Felt.

Commissioner Rusty Granzella raised a question about the power lines that march along one side of the long and relatively narrow parcel. Chaffee Planner Christy Barton said there is a proposed 20-foot rear setback as well as a 75-foot wide power line easement, totaling 95 feet between the proposed development and the existing Mountain View subdivision.

Commissioner Keith Baker asked if the Planning Commission discussed “the possibility of an emergency ingress-egress — say behind lots 17 and 18.”

Barton replied that existing property owners had been approached, but they hadn’t agreed.

Applicants Jeff Post, and Jesse and Sarah Pridemore confirmed that the conversation had occurred, but “they didn’t want additional traffic on their road. As far as open space, I’d say CPW would have comments, we’ll wait to see their response. The idea is the residents would have pedestrian access but [the open space] should be limited to a wildlife area.”

Post added that regarding emergency vehicle access or an emergency turnaround “there are opportunities to do maybe shared driveways, or wider, drives.”

Asked about traffic studies, Barton said that the next step in the county’s development guidelines would include a traffic study to see if road improvements would be needed.

There was brief public comment primarily concerning two issues: the steep drop-off for the proposed open space that existing residents say is being underestimated as a safety issue, especially for children, and concerns over wells and water levels.

One resident pointed out that about half of existing homes have 45-50 foot deep wells, some are 45 feet deep, and the deepest current wells are 130 feet deep. “We’re concerned about the drainage from 15+ new wells, that the water level would drop significantly over time, if no precautionary steps are taken.”

Another resident of Mountain View Farms reiterated the water concerns and raised a health question about that many family homes being platted along the line of power lines, which according to that resident are actually on the parcels, not on Mountain View Farms lots. “I think there should be house readings, around those power lines. There is evidence that this has produced high gauss levels, and these proposed lots are right below that high voltage line that goes across there.”

“The exaggeration of the grade in that proposed green area to the north is almost at least like a 45 percent grade,” he added. “You sure can’t walk up it … the end is the end. The reason why that hole is there is they used that area as a gravel mining pit when they put in [U.S.] 285.” He added that there is a drainage area crossing some of the proposed lots that is swampy.

Post responded that this proposed development is only at sketch plan stage, “So there is a lot to work out … it is not harming other wells; in the packet, you’ll see the surrounding wells, including a couple of high-producing wells in Poncha – these would be downstream of those. The other thing that has come up, is the right to ranch requirements – the ditches that go through the parcel are for active production ranches to the east.”

Granzella made the motion to approve the sketch plan and prepare a resolution to that effect for review during their January 3, 2023 meeting. Baker seconded and it passed unanimously.