Officials at Colorado Central Telecom (CCT) are hoping that the third time will be the charm. In documents filed late last week, CCT filed a grant application to the Colorado Department of Regulatory Agencies (DORA) for broadband funding to connect roughly 310 unserved households in Chalk Creek Canyon to the 21st century. The grant, which has met the timeline for winter grant consideration, specifies that CCT connectivity would ride aerial electric poles up the canyon to St. Elmo.

This time around, CCT has filed for the grant with a plan to work in collaboration with Sangre de Cristo Electric, Association, Inc.,  (SDCEA) the local power utility. SDCEA owns the aerial infrastructure and the grant could fund aerial fiber within the existing electric utility easement up the canyon to St. Elmo.

Specifically, the grant application seeks to provide connectivity to the villages of Alpine and St. Elmo, as well as the unserved residences between Alpine and Nathrop in the canyon corridor. The grant would also provide WiFi to tourists and recreational visitors in St. Elmo. 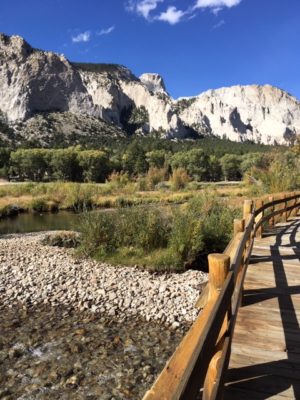 The project has a significant public safety component. Tourist and recreation activity has grown steadily in the canyon, and the lack of mobile phone service is considered a public safety issue. Broadband access will provide critical communications infrastructure for first responders such as Chaffee County Search and Rescue, Emergency Medical Services, the Bureau of Land Management and the U.S. Forest Service.

An earlier grant application by CCT aimed for the same access as this new grant application, but that grant was prevented from being executed. A second grant attempt would have funded trenched fiber within Chaffee County’s utility right-of-way through the national forest. It also didn’t proceed, because fiber trenching would have required USFS permits, adding months, if not years, of delay.

CCT says that the new application highlights a cost effective and scalable solution for broadband access in the canyon.

“We share a common goal,” said CCT spokesperson Maisie Ramsey about the partnership with SDCEA. “We want to provide essential broadband services to unserved rural residents, which by the way, includes members of Sangre de Cristo Electric Association. This also minimizes disruption to the native environment – the poles are already there. It completely avoids that lengthy permit process to trench fiber on U.S. Forest Service land.”

Funding for the fiber project would leverage public DORA funds and CCT private capital. If anything, the CCT proposal would appear to represent a good deal of tenacity; not many companies would make multiple attempts to obtain funding given the Chalk Creek Canyon terrain challenges.