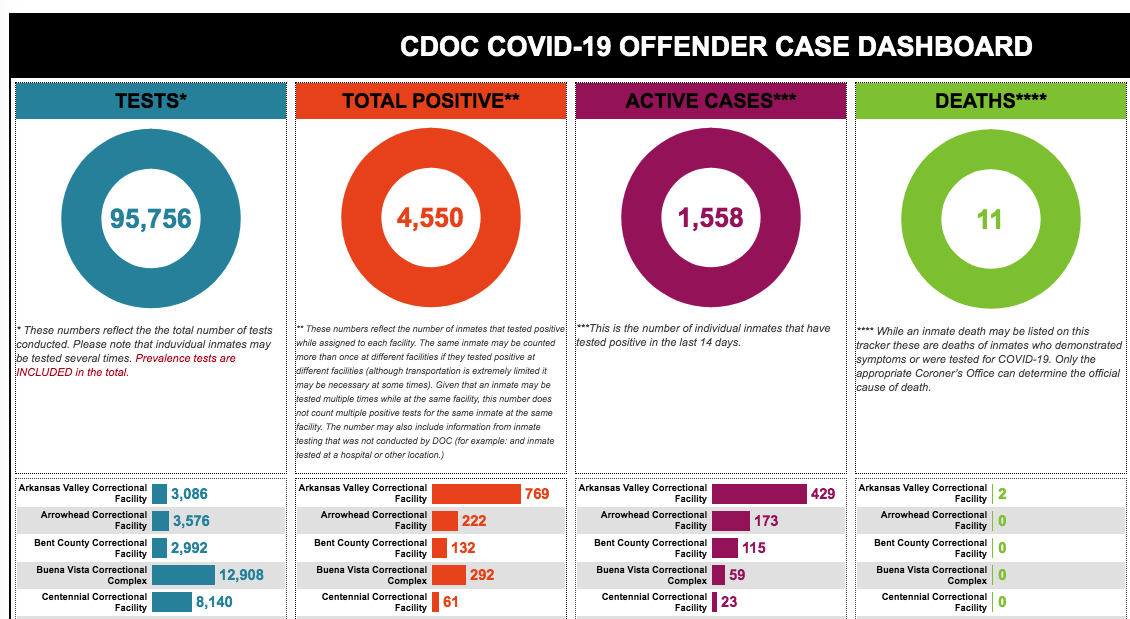 The Colorado Department of Corrections (DOC) is addressing concerns over the spread of COVID-19 in its facilities in the wake of four additional inmate deaths over the past week.

On Tuesday, the department issued a press release in which DOC Executive Director Dean Williams emphasized its commitment to fighting the virus “…with every tool we have, and we will continue to work with medical and public health experts to help prevent and mitigate the spread of this virus inside our facilities,” he stated.

“Across the world, this insidious virus has taken hundreds of thousands of loved ones from their friends and family during the course of this pandemic. Unfortunately, our incarcerated population is no exception, and our thoughts are with all of the friends and family members of the incarcerated men who have died over the last eight months,” Williams added.

The current DOC inmate population is 14,083, and the department said there are currently 1,558 active inmate cases. The CDOC employs 6,182 full time staff and currently has 207 active staff members who have tested positive.

While the vast majority of inmates that have tested positive have been asymptomatic or have had very mild symptoms, the release noted there have been 11 inmate deaths and no staff deaths. The department said it has conducted over 95,000 tests during the course of the pandemic.

The Buena Vista Correctional Complex is the DOC second-largest facility.  With some 12,900 inmates, there have been 292 positive cases, 59 of those active. Each of the other top facilities population-wise, the Fremont and Sterling correctional facilities, have had four inmate deaths each.

CDOC points to robust testing protocols as one of its most important tools. Regular testing of staff and inmates has been done, and those results are received and reviewed in coordination with the Colorado Department of Public Health and Environment (CDPHE). The test results, the release stated, help the Department appropriately quarantine, monitor and cohort inmates inside facilities.

“While the vast majority of inmates that have tested positive have been asymptomatic or have had very mild symptoms, there have been 11 inmate deaths and no staff deaths,” the release stated.

– A 62-year-old male inmate from the Fremont Correctional Facility died on Nov. 30 at Memorial Hospital in Colorado Springs after experiencing symptoms of COVID-19. He was transported to the hospital on Nov. 11.

– A 64-year old inmate died at the Colorado Territorial Correctional Facility on Nov, 30. The inmate was not experiencing COVID-19 symptoms at the time of death, the release stated. An autopsy will be performed and the coroner will determine cause of death.

– A 66-year old inmate from the Arkansas Valley Correctional Facility died on Nov. 30 at the Parkview Hospital in Pueblo after experiencing symptoms of COVID-19. The inmate was transported to the hospital on Nov. 10.

– A 74-year old inmate from the Arkansas Valley Correctional Facility died on Dec. 1 at the Parkview Hospital in Pueblo after experiencing symptoms of COVID-19. The inmate was transported to the hospital on Nov. 22.

Given medical privacy laws, the Department is unable to release the inmate names.

The department stated it has recently received and deployed BinaxNow rapid tests to all of the facilities, which allows for an additional level of staff screening, according to the release. The BinaxNow is not a replacement for regular testing, which will continue, but serves as a same day screening tool for staff, the release continued. The Department will continue to work with CDPHE to explore options for the use and expansion of this screening option.

To reduce the risk of introducing COVID-19 into a facility, both staff and inmates are required to wear face coverings at work in accordance with the Center for Disease Control’s guidance. Staff and the inmate population are being provided free masks, and to add another layer of protection for staff and inmates, staff are wearing KN95 masks. Additional personal protective equipment is provided to both staff and inmates as needed, the release said.

In addition to masks, staff are being temperature checked as they enter the facility and whenever possible, have been assigned to one area of the facility to avoid the potential for cross contamination between units to the greatest extent possible.

The department also noted that facilities are regularly audited for COVID-19 mitigation compliance and in between those audits, facility leadership are monitoring and enforcing policies for both staff and inmates regarding compliance with the COVID-19 regulations.

In the future, the Department stated it will be utilizing the CDOC COVID webpage to provide all updates on inmate deaths. That information will be found at: https://www.colorado.gov/pacific/cdoc/covid-19-faq-and-updates