The Board of County Commissioners (BOCC) heard a presentation from Colorado Department of Transportation (CDOT) Transportation Planner Aaron Willis during their meeting on May 21. Willis was accompanied by CDOT Region five Transportation Director Michael McVaugh and various Region five staff members. The session was comprehensive including administrators, staff and other representatives from all three of Chaffee County’s municipal centers (Buena Vista, Salida and Poncha Springs). 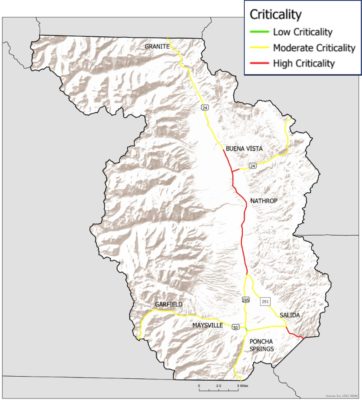 Chaffee County road resilience and criticality as assessed by CDOT

The purpose of the presentation was to update the BOCC on current projects within Chaffee County, but also to highlight any areas Chaffee County and its municipalities want to prioritize. According to Willis, CDOT is “resetting the planning process by bringing planning efforts together in order to develop a 10-year strategic pipeline of projects.”

CDOT wants to better integrate the transit piece with a regional transportation plan in what is called a multi-modal plan.

“We’re talking about roads, biking paths, transit needs and other aspects of the system,” said Willis.

“[We’re] looking at the whole system and not just individual projects,” said McVaugh. “That’s what this whole discussion is really about, instead of having these one-offs and trying to bring it together [later].”

The BOCC and municipality representatives decided to take a month to compile the county’s greatest needs and concerns and reconvene in July. The BOCC will then bring the list of priorities to CDOT during their next meeting in a few months.

Willis’ presentation highlighted the major areas of concern CDOT had identified throughout Chaffee County on CDOT- maintained roads. These roads include U.S. 285, U.S. 24 and U.S. 50. Citing the rapidly growing population in Chaffee County, he told county and municipal personnel that now is the time to bring concerns forward.

Willis specifically mentioned Chaffee County’s aging population and those who are transit dependent in his presentation.

“‘Transit dependent’ individuals are those who have a disability that prevents motor-vehicle operation, have no access to a vehicle, and may live below the poverty line.” All factors that age may contribute to. 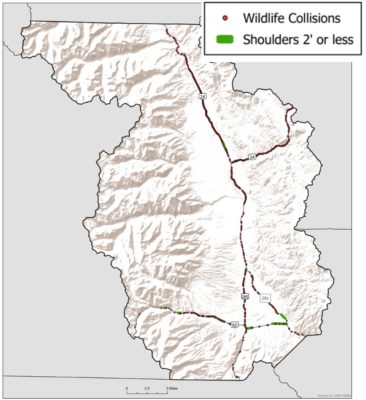 CDOT’s drive-ability assessment of U.S. 24, U.S. 285 and U.S. 50 found area highways to fall within what is called the ‘moderate’ category. According to CDOT, a moderate rating means these roads have between four and 10 years of moderate drive-ability remaining.

“The highest accident rate we have in Region 5 is wildlife. That is the number 1 crash type region wide,” said McVaugh. He added that mitigating wildlife collisions isn’t so simple. Especially when wildlife collisions mar nearly the entirety of U.S. 285 and U.S. 24 in Chaffee County.

“It’s so hard [to fix]. Where do you start? Where do you make changes? It is not a simple solution,” said McVaugh, pointing to the wildlife fencing installed in the past year along U.S. 24 and U.S. 285 near Johnson Village. “Long-term, you may see all of highway 24 and 285 fenced. If money wasn’t an issue, we may already be there.”

CDOT also rates roadway resilience, measured by a criticality factor. CDOT measures criticality by assessing “the importance of each asset to overall operations within CDOT’s network as related to system resilience… The goal is to quantify and improve highway system resilience in advance of future physical threats (floods, rock slides, blizzards, etc.), and to reduce future system losses” (Per CDOT’s presentation.)

“When it comes to resilience, how do we keep that connectivity, that livelihood, the commerce moving forward,” said McVaugh. 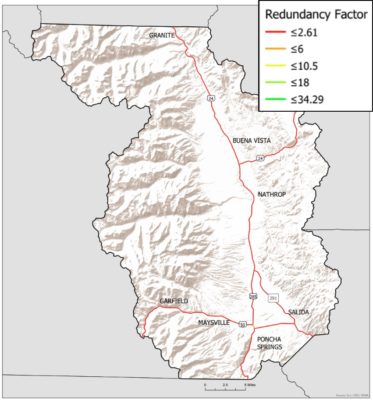 A low redundancy factor means it is imperative that the available route options remain operational. If the only route options closed, then the economy suffers. Commissioner Greg Felt pointed out how beneficial CDOT’s COtrip program has been to motorists in and around Chaffee County.

“People are really making decisions [based on COtrip] as to whether to go [through South Park] or not,” said Felt. “I think it’s really impactful.”

McVaugh acknowledged COtrip’s success, however, he also pointed out the system has its flaws.

“We need to ensure COtrip is reliable,” McVaugh said. “Really bad weather or days of no sunshine compromise reliability of that system (the road cameras are solar powered).”

He added that CDOT is currently working on updates to the COtrip system. Updates that will make road-condition assessments more accurate. “CDOT is beta-testing a new COtrip,” said McVaugh. “The information from [the new system] will be much more reliable.”

“I would strongly encourage a [economic] category for recreation. It really is an economic driver in Chaffee County,” Nelson said.

Felt emphasized that it’s important to remember that Chaffee County also serves as a gateway for travelers heading west.

“Being a corridor, it really contrasts with how we think of ourselves as a rural community just based on the amount of people passing through,” said Felt.

Buena Vista Town Administrator Phillip Puckett echoed Felt; bringing attention to Chaffee County’s reliance on surrounding transportation systems, and not only its own.

“We focus on our region, and our county, but we rely heavily on other areas of the state to get here,” explained Puckett. “We are dependent on them to keep up with their infrastructure as well.”