In an announcement late Sunday, March 24, the Central Colorado Conservancy (CCC) and the owner of the Centerville Ranch, Jeff Ince, announced the formal signing of the option contract that will allow them to move forward with the plan to protect roughly 70 percent, or 650 acres, of the 940-acre parcel as working ranch land, wildlife habitat and recreation area, in a historic conservation easement. The project has been called a “watershed moment” in how Chaffee County and the Upper Arkansas Valley will manage land development as the state continues to grow. 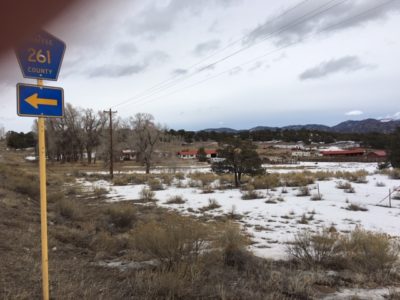 “Coming together as a community, we can make this a positive outcome for everyone, a win, win, win,” CCC Executive Director, Andrew Mackie said. “Good for the developer, the community and the natural resources found on the ranch. This is what the conservancy’s mission is focused on accomplishing.”

The contract allows the conservancy to move forward toward the final conservation easement, as long as it fulfills its part of the contract. It now has a target of August to raise $100,000 in community funding, which will then be used to develop grants and other funding mechanisms to create $1.3 million, half of the estimated $2.6 million in the conservation easement’s development rights. Ince has agreed to donate the remaining $1.3 million. The built-out value of the Centerville Ranch land within the easement is estimated at $4 million to $5 million.

Following the public review of the plan to the Chaffee County Commissioners March 19, and a public presentation that night, in 24 hours the community donated $22,000 in funding toward the $100,000 community support goal for the easement.

“This is a tremendous level of support from our community,” said Mackie of the funds already committed. “We have tried to address all the concerns raised by the public in our negotiations with the landowner/developer. I think we did a great job in creating this option agreement and setting the stage to protect 650 acres of the property.”

With the conservation easement protecting 70 percent of the Centerville Ranch property, Ince is now looking at 59 lots on the roughly 300 acres outside the easement, a major reduction from his initial plan of 210 lots on roughly half the ranch. In addition, the conservation easement will tie all three existing water rights to the land for the agricultural operation. Traditionally, the ranch produced hay and cattle, and Ince said that the easement will allow for the continuation of agricultural operations in perpetuity.

“We may look back on this and see it as one of those watershed moments in our county,” said commissioner Greg Felt that day. “We took things to another level to try to ensure the destiny for this county that many of us hope for,” he continued, referring to the recent Envision process, in which 70 percent of citizens polled identified working ranch lands as a top priority for protection.”