CEO of OpenGov Stops in Salida on 4,000 Mile Bike Trip

CEO of OpenGov, Zac Bookman has embarked on a cross-country bike tour to thank public servants and raise funds for the Sandra Day O’Connor Institute. On September 21 he stopped at city hall in Salida to meet with our local city government officials.  He and his videographer followed that with a stroll on the Riverwalk and a tour of the downtown historic district, led by Treasurer Merrell Bergin.

OpenGov provides the city with budgeting and financial reporting software, used by many municipalities and government entities.  According to City Administrator Drew Nelson, the OpenGov platform, now in use for the second budget year has saved department heads significant time in preparing their worksheets.  The city also has recently expanded its use of the software to make it easier and more transparent for citizens to obtain information about city finances, right on their own PC or mobile device.

OpenGov launched its “OpenGov Across America” campaign in support of local government leaders to thank them for shouldering the burden of keeping their communities safe and governments open for business throughout the pandemic.  As part of the campaign, Bookman is continuing his nearly 4,000-mile cross-country bike tour across nine states to meet with and hear directly from town, city, and county leaders about how their governments have evolved to address the urgent needs of their community’s, post-pandemic. 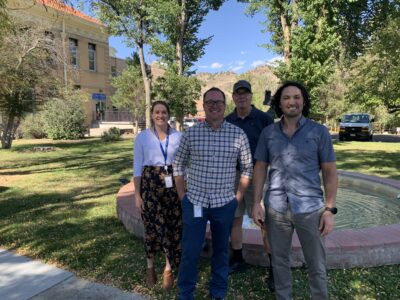 In conjunction with this ride, OpenGov has committed to supporting the mission of the Sandra Day O’Connor Institute For American Democracy to increase awareness of the importance of civic engagement, civics education, and civil discourse. Together, they will raise funds to help educate future civic leaders and enable a more informed and engaged citizenry.

Bookman explained “I’m excited to continue on this amazing adventure to highlight the local government visionaries who have devoted their lives to serving American communities. In support of that mission, OpenGov is proud to team up with the O’Connor Institute to champion the next generation of public servants and educate residents about the importance of civic engagement.”

Bookman is traveling west to east. After braving significant flash flooding in Utah and then crossing the mountains from Crested Butte, down Cottonwood Pass, and into Salida, Bookman said he was looking forward to his next leg, downhill to Pueblo, CO, and then onward to Kansas.