The Chaffee Housing Authority (CHA) Board of Directors met in regular session on Jan. 19, 2023.

Guests in attendance included Mike Bischoff, CHA Deputy Director; Kelly Landau, CHA Grant Evaluator and Lisa Parnell-Rowe, Buena Vista Administrator, along with two members of Bringing Everyone Together Through The Crisis of Housing (BETCH). “Salty” Riggs, BETCH co-founder attempted some fence-mending with the board, while at the same time, encouraged more input from renters and others who are housing-challenged. She made a request to “work with us and we will work with (and support) you.”

Committee chairs provided updates on their progress, leading off with the search for an Executive Director to replace Becky Gray when she departs midyear. According to Board Chair, Craig Nielson, the position and requirements have been posted, a salary range is now set and applications are available here.

Dominique Naccarato represents the residents of Salida City Council Ward 1 and serves on the CHA board. Courtesy image.

Board Member Dominique Naccarato noted that the Governance Committee has a list of policies to develop and propose. A top priority is a “Community Partnership Evaluation Matrix”.

A key part of that is a rating rubric that will be sent to the Executive Director for initial review. The purpose of the matrix is to help the board evaluate partnerships, priorities, and projects that best meet the mission and resources of the CHA.

After careful consideration and with input from each board member in attendance, a pair of resolutions resulted in unanimous votes creating major milestones for the $6.5 million, planned Jane’s Place transitional housing project in Salida.

“Resolution 2023-02 authorizes the Development Committee to move forward with a phased approach to Jane’s Place construction, expending up to $575,000, and for the Board Chairperson to execute the associated legal documents.”

While the Board of County Commissioners considers a proposed lodging tax allocation as collateral for CHA debt, the goal is to mobilize the Diesslin Structures crew and their subcontractors while they are available, improving the land parcel, without making it project-specific. With rising construction costs, getting a shovel-ready project underway helps control costs and also shows prospective funders the board’s resolve to proceed. The building permit is in place and the site has already been cleared and “grubbed*.”

Owner’s representative Todd Goulding noted that the CHA had $840,000 in the bank. Board Chair Craig Nielson reported that Read McCullough (CHT Executive Director) on the CHA Development Committee “did not see any red flags at this time..all development involves some risk.” 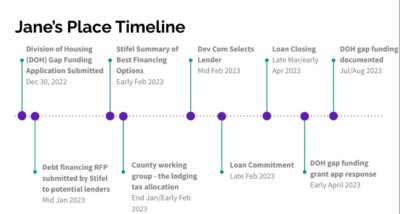 (The companion) “Resolution 2023-03 authorizes the Development Committee to instruct Stifel [Finance, a municipal advisor] to release the Request for Bids to secure construction and permanent financing debt for Jane’s Place.”

This allows the CHA to “select a lender for the project (pending lodging tax allocation), negotiate a loan commitment and the loan documents and bring back the proposed loan documents for signature for board approval at the appropriate time.”

To date, the CHA has raised $2.3 million from the community and grants. It seeks debt financing of $2.5 million plus $1.3 million in gap financing from the Colorado Department of Housing (DOH) to complete the project.

The Board agreed to accept the members and terms of the current board roster and extend any soon-to-expire terms through March 31, 2023 to provide for continuity during the search for an executive director. Beth Helmke (having just been nominated by the Chaffee Board of County Commissioners (BoCC)) was formally voted in to be the Chaffee County Alternate seat on the CHA Board of Directors, effective immediately. She replaces the retiring Chaffee County Administrator Bob Christiansen.

Lisa Parnell-Rowe, the Town of Buena Vista Administrator was also present and has been nominated to succeed Phillip Puckett to hold the Buena Vista Alternate Board seat. Parnell-Rowe noted that she had written her dissertation on housing and how it affects the community. A vote confirming that nomination will be taken at the next meeting.

The Board agreed to hold monthly board meetings for the foreseeable future (at least until a new Executive Director is onboarded.) In addition, the CHA’s finances and budget will be reviewed as needed while county funding and the Jane’s Place project progresses. Finally, a post-mortem on the failed Ballot Issue 6A (for ongoing CHA funding) is planned, but has yet to be scheduled.

Director Becky Gray provided a self-evaluation and called for a formal evaluation of her tenure as head of the CHA. In other matters, work is slated for the “Client Selection Criteria” (that caused some conflict previously as to criteria for ranking prospective tenants.).

Finally, the board discussed staff and board training and a need for a comprehensive training schedule tied to the annual budget. Founding Chaffee County Community Foundation Director Michael Hannigan is already slated to provide training on board vs. staff roles, while CHA board member Monica Haskell called for additional training in Diversity, Equity, and Inclusiveness (DEI) among other topics.

After a motion to adjoin at 4:43 p.m., the board moved to go into executive session to discuss a personnel matter. The next regularly scheduled CHA board meeting is slated for Feb. 16, 2023 at 3:00 p.m.

Editor note: *Grubbing is defined as removing and disposing of all unwanted vegetative matter from underground, such as stumps, roots, buried logs, and other debris.