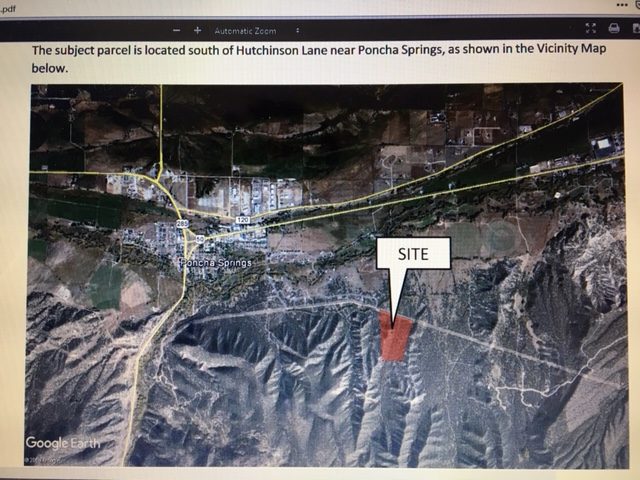 During its Tuesday, May 19 regular meeting, the Chaffee Board of County Commissioners (BoCC) chose to continue the public hearing for the appeal of the Larks Perch subdivision preliminary plan to July 7.

The decision was made based upon concerns over the difficulty of explaining what the applicant says is a complex project, and because the BoCC had only received some of the information (a new drainage report) only a short time before their regular meeting. Some were concerned that they had not had enough time to adequately absorb the information.

The Larks Perch Major Subdivision Preliminary Plan would subdivide a 36.87-acre parcel into 13 lots. The parcel located at 9479 Hutchinson Lane, is owned by Hutchinson LLC c/o Integrity Trust. The Chaffee County Planning Commission, after extensive review, had rejected the project for several reasons.  One major objection was steep slopes and two major drainage areas (there is additional drainage as well) that run through the parcel, which they said could contain significant debris flows following major weather events.

The applicant had proposed new and replacement culverts.

“In a significant weather event the culverts would quickly be filled with debris,” said County Engineer Gary Greiner. “The water cannot transfer under the road, and it will stay on the easterly [upper area with lots] side.”

Some planning commissioners, and Chaffee County staff, also grew concerned about the dangers represented by debris that could form in the aftermath of wildfires and what they pointed out was the lack of a second escape route.

“Things have been asked of this subdivision that have never been asked before … there’s never been a requirement for a subdivision to model and mitigate for post-fire flows,” said Joe DeLucca.”There is a definite misconception about drainage and drainages that need to be worked out with staff … these issues are too complicated to be decided by the Planning Commission without some good engineering input.”

He went on to add that the data was too complex for citizen planning commissioners to understand and that Chaffee County has “plenty of historic evidence for residential areas with single emergency escape routes, like Chalk Creek Canyon and now Tail Winds.”

“My thinking is related to events like the Big Thompson flood – it is people getting out rapidly – the one-way egress and  everybody getting out of there … that is my primary concern,” said Commissioner Keith Baker. “Let’s not get bogged down in what has been done in the past. As we grow, people are going to want to build where we never thought of before. The emergency egress is a growing consideration and Chalk Creek is a prime example.”

In earlier public hearings with the Chaffee County Planning Commission, there have been significant public concerns expressed; including proximity to major wildlife areas, the drainages, road access, and traffic on roads that are maintained by other subdivisions in the area.

From a historical perspective, long-time resident Art Hutchinson noted during one of those earlier hearings that he’s seen boulders the size of cars come down those drainages. His concern he said, wasn’t just the debris that might come down on his irrigation ditches, it was for the safety of the people who would be living in the homes on those lots.