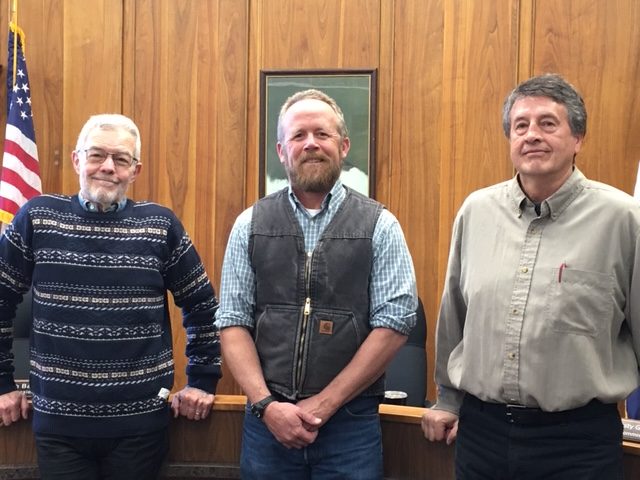 In what became a lengthy discussion during the Chaffee Board of County Commissioners (BoCC) on Tuesday, July 6, an application for the Shaw Ranch Major Subdivision final plat was approved. 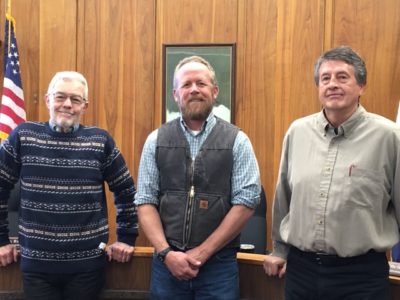 But the vote became confusing when, after the motion to approve made by Commissioner Rusty Granzella (with adjustments to conditions 20 and 21 and asking staff to prepare a resolution for Aug. 2), a Chaffee staff member inserted a question. Then a member of the public who couldn’t get on Zoom asked to be allowed in, and the motion hung without being seconded.

Commissioner Keith Baker finally seconded the motion after two conditions (one a duplicate) were removed. In the end, the vote was unanimous, but that does not mean the BoCC didn’t have many questions that required explanation.

The applicants, JTS Development, LLC  (represented by John Shaw)  has proposed to subdivide 74.3 acres into eight lots ranging in size from 2.4 acres to 36.6 acres. The parcel located at 7380 County Road 221 in Salida includes a major wetlands area as well as a mesa more than 40 feet above the river. Wells and on-site wastewater treatment systems will serve the property. The property has a 100-year floodplain associated with Greens Creek along CR 221, and the South Arkansas River (also known as the Little River)  along the northern boundary. 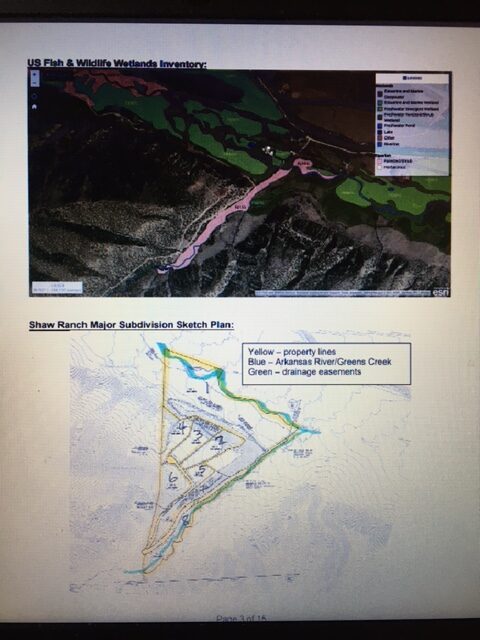 Neighbors have raised concerns about the project on one thing or another for months. In fact, the agenda item was continued from May 10 and June 14 as the county and applicant worked through issues.

Controversy has stemmed from problems related to the location along the South Arkansas River and Green Creek, and any possible disruption of the extensive wetlands on the parcel and the flood plain.

There were questions about the pedestrian/ATV trails being created on the parcel, and the narrow road right-of-way for CR 221 to access the proposed lots.

Neighbors have also raised concerns about a bar structure that Shaw has built in the wetlands trail area, worried that he intends to use it for events, or open it to the public.

There was a major discussion over the narrow width of road CR 221 in some areas, which would be used to access the mesa lots. Portions of it are only 20 feet wide, (in a section where it borders U.S. Forest Service land)  meaning those sections would be impassable by two vehicles at a time. But widening it would undercut the mesa bluff creating concerning site erosion.

Chaffee Development staff pointed out that because CR 221 will still be a low-volume road even after the major subdivision is complete, adding that “there are advantages of not further widening it, including that that would allow for a pedestrian path alongside.”

Staff confirmed that 30-inch culverts are acceptable in that area and that would further reduce the risk of more erosion and supported not widening the road. “Otherwise we’d have to cut a vertical 40 ft. high and this reduces the chance of erosion out of a bigger cut…. with a narrow road, we can set this up with a pullout, allowing traffic to see others coming, and wait for the other vehicle to pass.”

Granzella queried the applicant on who would be responsible for the road, and the culverts, should anything happen to the road. Principal Planner Greg Laudenslager initially said his understanding was that the road culverts were the responsibility of the Home Owners Association (HOA). But Shaw disagreed, saying, “If there is ever any type of road maintenance … that would go to the county, we agreed … anything that would have to do with road maintenance would fall upon the county.”

“This sounds then like you aren’t relying on this HOA to do much of anything,” said Felt.

Chaffee Road and Bridge Superintendent Mark Stacy confirmed that his crews will be the ones to handle the new culverts: “We inspect for a reason — so they won’t get plugged up. I would say it’s up to us in a storm event  — it’s us clearing it up.”

The BoCC expressed concerns about the flood plain and water rights. Laudenslager said that the placement of large lots up on the mesa “allows for a lot of flexibility for the land to avoid impacts along the river and the wetlands … all the other lots are up on the mesa away from the South Arkansas.”

“I question the wisdom of us approving something that may have unforeseen consequences,” said Felt, who referenced not just the creek, but an agricultural ditch in the area and maintaining water rights on the land. “It just makes me uncomfortable that there will be changes in this … going into conservation easements. I’m not sure it’s really right, to tie up the creek in something like this.”

Laudenslager responded, “A second level could convey that water to the land… it might be enough to keep the water in its place.”

“I want to clarify that I’ve been trying to keep our agriculture in production. I like to keep the water on the land,” added Felt, “so this water right can only be used on this land … When you look at ag lands some are marginally irrigated … at market rates the water courts could sell that (water right), the reasoning being they don’t really understand what they are doing.”

Public comments came from neighbors of the proposed subdivision, most focused mainly on trails, land usage, and wildlife.

The first speaker said that although it had been promised that there would be no new trails, she produced several photos of new trails being undercut by the river, including trails protected by split rail fencing that kept wildlife away from the river. She added, “The Greens Creek Corridor is an extremely high wildlife area, and the rest of the wildlife including the big game, need access to the water, this is a violation of the contractor for the South Arkansas … I would like to see some protection grandfathered in so the animals can get to the water.”

A second speaker said that “the Chaffee Planning Commission has made this trail all private, along the river. How will the county monitor this? It’s not clear how this will be enforced, especially if this [area] is being used for events.

The issue of what was described as “a bar structure” was raised during public comment, with neighbors concerned that the area would be opened for event rental or even become a public tavern or restaurant.

Shaw said that the existence of the structure was for the personal and explicit use of the owners of homes within the subdivision, but asked that the BoCC take this at his word. “I’m not planning to do anything more with it than I am right now. No one else should have anything to say, it’s a place for friends and family to gather,” he added.

Another neighbor raised the issue he said was already becoming a problem; as many as 100 bicycles a day riding through the area, seven days a week, from daylight to dark. “I’ve lived in this county since 1960 and any time a big-time developer who doesn’t have to get approvals comes along… … What is the approval process for this?”

Granzella asked for clarification about what was intended with the trail easement. Shaw discussed the use of ATVs on the areas by the river and noted that the HOA documents will limit them to five mph, and not chasing wildlife. He added, “we have no intentions of creating a race track or something.”