During its Tuesday, November 1 regular meeting, the Chaffee Board of County Commissioners (BoCC) made a decisi0n to postpone its discussion of the final major component of Module 1 of the revisions to the county’s Land Use Code (LUC), the section of private land camping that has bedeviled the BoCC,  to January 10, 2023. The topic has been discussed multiple times in public, and each time new issues and new input has shifted the LUC draft document. 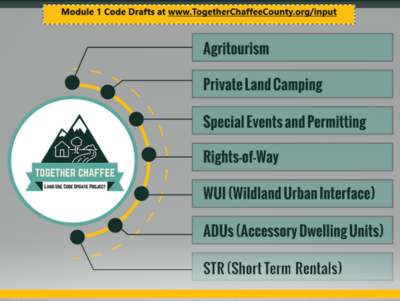 The only section left to finalize in Module 1of the Chafee County Land Use Code update is private land camping.

“This the last piece of Module I – Module II, we’ll have a draft of that today or tomorrow and will discuss in the Planning Commission [Tuesday evening], said Asst. County Attorney Miles Cottom. “The question is, what or who else do you want to weigh in on this? If it’s not going to be discussed until January, we can still outline who we’ll seek out as a (referral agency/commenter) on this.”

“[Then] We can be fairly intentional about sending this back to the community and saying that county commissioners do not have an appetite to create an avenue for camping as a permanent housing option, but there might be certain avenues for it (seasonal or some format), that they come up with just for the workforce,” he added. “It may be possible to do input in November and come up with language that doesn’t interfere with the timetable on Module II.

Commissioner Greg Felt had earlier noted that “I want to make sure we don’t switch commissioners halfway through this discussion – either push it to January or finish it soon.”

A motion was made by Commissioner Keith Baker, and seconded by Granzella, to continue the private lands camping module to Tuesday, January 10, 2023, the day the new commissioner will be installed. 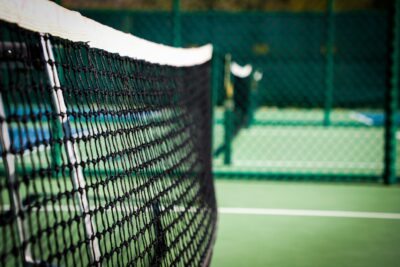 Pickleball courts are more popular than ever. Image by Unsplash.

The BoCC considered and unanimously approved two separate requests from the Town of Buena Vista staff regarding both the 2022 and 2023 budget for two important projects; one for Buena Vista River Park, the other to help them begin work on the new Cordova Community Park and trail.

The first request was to release $7,500 of the original $25,000 of Conservation Trust Fund (CTF) Funds in the 2022 Budget to support trailhead and parking improvements in the Buena Vista River Park. It was unanimously approved.

“Our new trails and new courts in Buena Vista are heavily used, said Recreation Director Earl Richmond. “We broke it into chunks — we just completed the new pickleball court the end of Sept. We have the Walton Loop to finish and we’ve got to get parking lot drainage issues solved. We want to get that work done in 2022.”

Baker made the motion to approve, Granzella seconded and it passed unanimously. 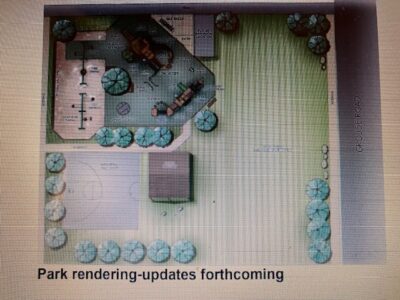 A concept plan for the long-awaited Cordova Park and Trail in Buena Vista.

The second request from the Town of Buena Vista was a $51,000 appropriation from the 2023 budget, to help fund the first phase of construction and build-out of the Cordova Community Park and Trail. Since planning began on this in 2016, the project has acquired some history; its name has changed and so has the price tag. The town is putting it in its 2023 capital budget to support the park and trail system.

The park would be placed in the southwest quadrant of Buena Vista adjacent to the Chaffee Fire Station off West Main. It would include a large playground and fill a public void. “It’s 1.5 miles to the closest park. Our residents have wanted this for years,” said Richmond. “The town has some funding, and we have $51,00 toward this —  $66,000 including a $15,000 planning grant this year.

The park area is large; close to 35,000 sq. ft., and it is envisioned it will have a public play structure, restrooms, courts, shade, sidewalks, and ADA access.

“It will carry a First Responder theme,” said Richmond, explaining the new vision for the park. One of our first responders Billy Cordova died in a tragic accident, so the people want to name the park after him and his family … there is also great trail connectivity to get people from our public lands trails to this park.”

Richmond was forthright about the funding. “The $51,000 would bring our funds up to $117,000. We will need some $500,000 for the total cost and we are looking for grants to complete the funds. We know grant opportunities are not 100 percent guaranteed — but we want to get started on this park.”

He added that although the park would be within the town boundaries, its proximity to some of the county’s development means that it is going to service all of Chaffee County. “There is residential construction only one-quarter mile to the west that is county land.”

The BoCC decided to move the Sullivan-Finsterwald Boundary Line Adjustment out of their Consent Agenda. The applicants Lorrain Sullivan and Russell and Carol Finsterwald requested to adjust the property lines between their two parcels of land, both zoned industrial.

The request was unanimously approved, and a solution will be prepared for a final vote during the November 15 regular meeting.

The BoCC took up a renewed discussion of the Ogden Major Subdivision Preliminary Plan-Final Plat which had been continued from their October 11 2022 session. The request by applicants: Ralph and April Ogden is to subdivide Lot 2 of the Ogden Heritage Water Subdivision Exemption of 20.14 acres into five lots, all approximately 4.0 acres. Wells and on-site wastewater treatment systems would serve the property.

The request was approved and a resolution will be prepared for final vote at the November 15 regular meeting.