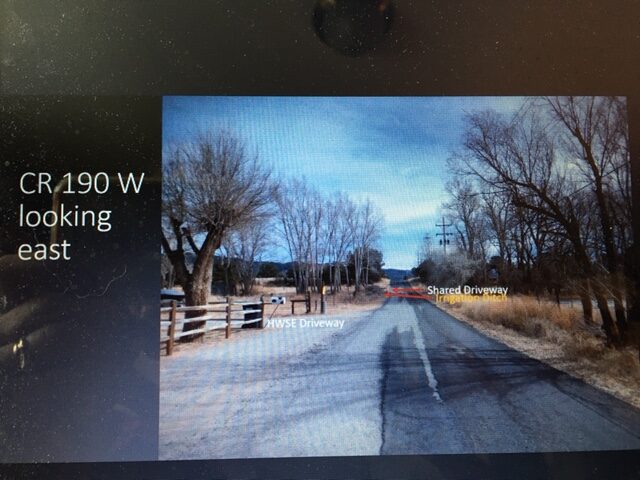 The Chaffee Board of County Commissioners (BoCC) addressed several public hearings for heritage water subdivision, a major subdivision sketch plan, and a lot line elimination in Garfield townsite during their Tuesday, Jan. 11 session.

They unanimously approved the Ogden Heritage Water Subdivision with the direction to move it to a final resolution with a payment in lieu of water supply for the remainder parcel. The approval included a discussion of the road, which now has limited use, and clarification of the conditions placed on the subdivision by the Chaffee Planning Commission.

“Should they decide to subdivide that parcel further, they would have to determine with the Ogdens or the HOA, whether the rights are theirs to allow additional traffic – who would be the sole determiner of that?” asked Commissioner Rusty Granzella.

“They would have to determine what the uses are, the benefit of the easement goes to the parties,” said County Attorney Daniel Tom. “They could come to a mutual agreement and a new easement. If they can’t agree, then they would then have to go to court. That’s why the generic historical use was put in the resolution. Whether the easement allows for new uses, documenting public or past historical use is good if we have a property owner asserting that his use is not a new use.”

This project is at sketch plan stage, which means it wouldn’t normally go to the BoCC at this point. But due to the extensive public outcry about the project related to road safety, the BoCC decided to call it up for public review.

The parcel, south of CR 190 and with a Right of Way and a portion of the proposed subdivision intersected by the Sunnyside Ditch, borders an access road with a steep hill, a curve, and possible blind access to the proposed access road. The sketch plan creates a subdivision with seven new lots. 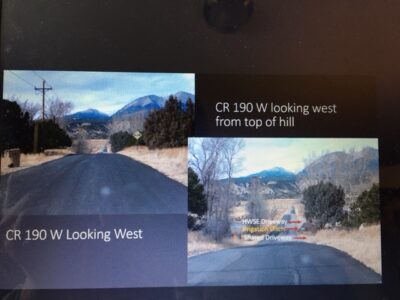 The public road is narrow, no more than 25 ft. wide where the ditch crosses under the road in a culvert.  The road is posted at a 25 Miles Per Hour speed limit and there is a shared driveway right next to the Sunnyside Ditch. Brady Everett is one of the ditch owners and there are a few mailboxes along the road, with seven more to be added.

There were enough concerns about the sketch plan and the current speeds on the road that the Planning Commission wrote two pages of conditions. Asked if he couldn’t just add speed bumps, Chaffee Road and Bridge Supervisor Mark Stacy said ” I discourage speed bumps and dips, they are a hazard for our equipment …  it has always been in a dangerous spot…. the biggest safety issue is the sight distance from the access to the east, the other is the narrow road.

Planning Manager Christy Barton confirmed that the subdivision project is actually the remainder parcel. “The subdivision exemptions don’t go through this process, it’s one review… that’s how this got to this point…. Actually no one has agreed to improve the culvert.”

A discussion about widening the road and putting a bigger culvert brought up costs, and developer Jeff Post said it wasn’t really fair to put the entire cost of that widening and culvert on the developer when neighbors’ road speed were contributing factors.

Applicants Shawn Alison and Jeff Post noted how frustrating the process has been for this development, adding that there was never an agreement for them to improve the culvert.

“What I said in sketch plan was I recognized that this road has got some issues. But it shouldn’t fall on my shoulders to widen the road and that culvert. The driveways have been there for a long time, even before the current owners bought that. I recognize that speed and awareness are issues, but I’ve gotten volunteered that I’d be willing to increase the size of that culvert … this property is not a rural zone, it is a residential zone, it has that much more use by right on what we are proposing.” But he did go on to offer $5,000 toward the culvert cost. 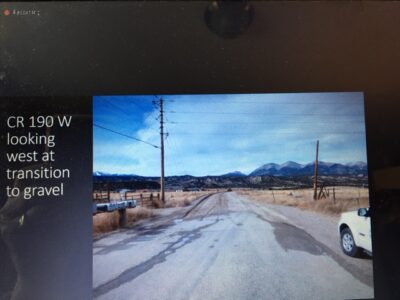 “It’s about 500 ft. from the top of the hill to that drive area, and it’s about 15 ft. at its narrowest,” said Stacy…” the ditch company has to tell me what size culvert to put in – it’s well above what would be there currently. I’d guess it’s going to be a 50-inch culvert, but I can’t tell you for sure now.”

He pointed out the tree growth along the ditch and road that would have to be dealt with too but added by removing that, the county would gain a 30 ft. Righ of Way (ROW) on the north side of the county road, but that it wouldn’t go all the way because of the carve-out for the Lot 1/heritage water subdivision — and that would need to be granted.

Post raised the Right to Farm and Ranch rules, saying he had gone over and beyond with agreements with the ditch company … “ditch owners have the right to do what is reasonable to access that ditch and we’re putting it on the plat.” He asked for clarification regarding the county’s water testing requirements, noting that there was talk both of water quality, and water quantity, and asked for some consistency

“My major concerns were the sightlines, that we aren’t creating a hazard,” said Commissioner Keith Baker; traffic concerns echoed in public comments by Ralph Topper and Jerry Raski.

The BoCC decided to note in its meeting minutes that it wants staff to look at the road issues before the county proceeds, the applicant is providing $5,000 toward the road improvements, county legal can look at whether an easement or a ROW dedication may need to be done, the neighbors on the southern side of the road need to be involved and both the ditch company and the heritage water subdivision lot should be brought into the conversation.

Stacy said that after more is known about the legal ROW, he’ll need to look at whether widening the culvert will solve all the issues,, or if it will take more steps.

Granzella moved to approve the preliminary sketch plan with suggestions for some extra conditions, Baker seconded, and the BoCC approved it unanimously.

The adjustment and elimination of several lot lines within the Garfield town site, which has small, 1880s town site lots was unanimously approved. Applicants Tess Paulden and John & Helen Stergius are seeking to replat several small lots into larger lots spaces. The lot line vacation did not involve any right-of-ways, so a simple motion and unanimous vote approved the request.

The commissioners approved moving the south Fairgrounds land lease out of the consent agenda, in part because it got not one, but two bids for use of the land; one for a small parcel of unknown size assumed to be between five to 10 acres and the other bid for the entire 75-acre parcel.

After a discussion, in which they noted it would be more efficient to enter into only one lease agreement rather than two, Jennifer Bright, the bidder for the smaller lot of the larger parcel, said if she’d known there was a bigger parcel, she’d have bid to lease the entire parcel. She had bid $200/month for the smaller parcel.

Lisa Scanga, who submitted a bid for the hay and grazing cattle of the entire 75-acre parcel, said that if the smaller parcel was removed, it would change her bid. She also noted that from a business standpoint, it would be good to consider multi-year leases, rather than one year at a time.

The BoCC moved to continue the topic one week, to Tuesday, Jan. 18

The Tomkiewicz/Fortier Heritage Water Subdivision Exemption (a public hearing continued at least four times, was again continued, this time to a Feb. 8 hearing. Applicants Warren C. Tomkiewicz III and Karen A. Fortier still need to prove legal access to the property, within the town of Poncha. The proposed subdivision would subdivide a 19.88-acre parcel at 9540 W Highway 50, Salida into two (2) lots of 11.25 and 8.63 acres.

In the same session, the BoCC approved the draft of a Chaffee County policy for county staff teleworking and agreed to postpone the discussion of the county’s strategic plan to Tuesday, Jan. 18.