In a largely friendly hearing, the Chaffee Board of County Commissioners (BoCC) agreed that they intend to approve the Bonfire Entertainment event known most recently as “Renewal 2020” and now tentatively named Renewal 2022, on condition that a resolution continuing satisfactory protections for the county and residents can be prepared.

The bluegrass festival is being planned with the hope of attracting last year’s headliner Billy Strings and proposed for the grounds of the Meadows on the edge of Buena Vista for the weekend of  Sept. 24-25, with a load in the day before to spread out traffic. 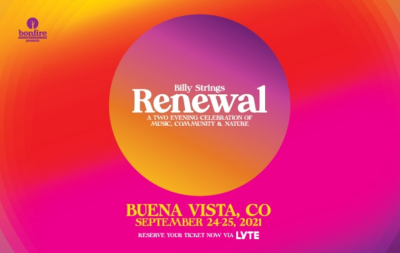 The visual for the Renewal 2020 festival. Courtesy of Bonfire Entertainment.

The unanimous vote on a motion made by Commissioners Rusty Granzella and seconded by Commissioner Keith Baker was not without a word of caution from Chair Greg Felt. The county legal department will now work with Bonfire Entertainment to develop a detailed resolution, which will also go to a BoCC vote.

“So our agreement timeframe is May 3. Hear me – do not put tickets on sale until we get this resolution sorted out.  Until we finalize this, which will spell out to our satisfaction how this is going to proceed between now and the festival date,” said Felt. “You’re aware of the backstory on that. The whole thing about selling tickets before approval was in the news again today.” (The comment referenced the ticket sales by another promoter, Live Nation, last year, selling more than the event cap even before the county had agreed to the event. )

Stoughton confirmed he understands the need to first finalize the agreement and was emphatic that he understands the community concern. “I want to deal with eveyone’s concerns. I’ve given out my email, and my phone number is available. I encourage people to reach out and talk about their concerns. They have a direct line with me. It’s probably impoassible to please everybody but that doens’t mean I’m not going to keep trying.”

County legal will work with the promoter on a detailed resolution addressing all the county’s concerns and how the promoter will address them. The goal will be to have a draft resolution by May 3, and a final resolution before June.

The request by Bonfire Entertainment CEO Scotty Stoughton had only one major change from the 2021 event; a request to raise the attendance limit from the 5,000 size cap imposed during the COVID-19 pandemic to 7,500. Currently, with the COVID-19 pandemic at least temporarily in retreat, the county has no cap on the size of an event held in the county.

That is, as long as other community protections related to traffic, noise, and nuisance can be addressed. Stoughton began his assurances by announcing that he would be setting up an onsite community liaison to create a direct line of contact between county residents and the music promoter. That, he added, doesn’t mean that he, himself won’t be accessible. “I’ve handed out my contact information. I’m always willing to talk if something isn’t going right.”

Questioned about the size request, Stoughton said: “We go for quality, not quality. Most promoters want to keep expanding the size of the event — ‘more’ meaning that it isn’t just the bottom line. Yes, I want to suport my family and be independent. But just as important is creating an impactful, positive community gathering. I want to bring people together and show them it can be done in a responslble manner. We do a good job of creating a positive space for everyone.”

Asked about the community concerns that have surfaced, Stoughton appeared both philosophical and sincere. “We’re doing all we can to be accesible. We want to great. Chaffee County holds a special place in our hearts. I go there. I want to be there. I personally don’t want to do large events. We are rooted in the community”(here, in Steamboat Springs and in Utah).”He continued “I have no intention of doing any more events than this one this year. We are pausing our Campout for a Cause event this year. We want to do just a few great events and we want to do a great job.”

“We’re invested in the community.  We know the pressures on the community from development.  That’s the difference between us and the other large promoters,” said Stoughton. “By working so hard to do this event at The Meadows there’s a good chance if it is successful, that it can hold off developing that meadow into something full of houses. I’d rather continue to an event once a year, so they don’t develop it. This event is a whole  effort. After the last one we did a town hall and we invited those who were against it, we wanted to hear their concerns, thats my mission to be part of real community

Asked about the headliner, Stoughton reassured the BoCC that the event would feature one headliner and only a single stage. “Billy Strings was just nominated for a Grammy and he’s a big name. He’s the biggest in bluegrass, he picked us because of the way we do events, the relationship with the communities. We’re not a large festival format where there are multiple stages and events. This is one headliner and some animation in a side-tent – that little increase in capacity will help us become profitable and to land Billy. He’s got a lot of offers from bigger promoters.”

He added that Bonfire Entertainment needs the event approval to finalize its performance contracts. “Getting a conditional approval is a step – that doesn’t mean the show is on,” Stoughton explained to Ark Valley Voice after the BoCC session. “There is risk, there is budgeting, reaching a point to sign all the other contracts we have to sign. Just because I had a good meeting doesn’t meant this is a done deal. It’s challenging; it’s not like you get the permit and its done.” He chuckles. “It’s like getting a drivers license, there are rules you have to stay within.”

The increase in size will also require a traffic diversion turn lane on U.S. 24 and Gregg Drive. While the county and town have some experience with this, Sheriff John Spezze noted that the combination of the Sheriff’s Office, and Buena Vista and Salida Police forces can handle the event. He added that the traffic into the neighborhoods wasn’t necessarily due to traffic volume, but people going online.  “You know what kills us – they go to Maps, and the GPS directs them through the town neighborhoods… the load-in will be Friday with music on Saturday and Sunday and that will help.” He added that in his opinion, “it’s on the promoter ‘s website to educate the public on the route we want them to take… [Stoughton is very committed to working closely with the neighbors…they can have the most influence over the attendees.”

The proposed sound levels for the festival are the same as last year, but that didn’t stop some area residents from complaining about the noise. In the absence of any other larger concert promoters and events this year (as opposed to prior years) it almost seemed as if town residents now aimed at Bonfire Entertainment for complaints.

Among the areas of surprising concern, and community comment was the designation of South Main Arts as the designated nonprofit. Per state statute, as a nonprofit, they are leasing their right to use The Meadows to Bonfire Entertainment for the event. Their involvement allows some latitude in sound levels in exchange for a designated donation to the work of the nonprofit. However, the county and Bonfire Entertainment have agreed to work together with a goal to keep sound levels to acceptable levels.

The BoCC asked the promoter to review this nonprofit decision, not necessarily to make a change but to assure themselves and the community that this was the best nonprofit with which to associate.