In a busy Tuesday morning meeting of the Chaffee Board of County Commissioners (BoCC) this past week, commissioners heard a report of the county’s continued growth in construction, as well as participated in a roundtable with some members of the development community concerned about the upcoming start of the Land Use Code (LUC) update.

Inflations fears, supply chain issues, and rising construction costs don’t seem to faze the pace of development in Chaffee county, nor is it slowing the inflow migration into the county.

A look at the Arkansas River Valley for 2021, shows that the pace of construction continues to increase. The Chaffee County Development Services Director Dan Swallow reported that his department issued 290 permits for construction in January 2021, compared to 245 in January 2020. This includes everything from single-family homes and apartment units, to mixed-use development,  factories and motel/hotel expansions. 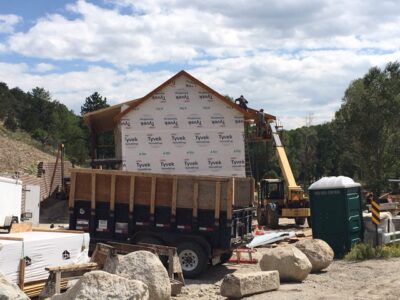 “We issued the permit for the Fading West factory and the hotel permit for Mt. Princeton in January last year,” said Swallow, discussing some of the bigger construction projects. He added that the large Salida Crossings housing project in Salida got a new engineer on board and they were able to issue the permits for the foundation and footings permit just in January 2022. “We’ve seen the civil drawings, and enough of the structural to approve the foundation – we’ve only collected 10 percent of the permit fees so far.”

Among major construction projects this year, will be the county’s own renovations to the Chaffee County Administration Building. Given the historic nature of the 1930s Art Deco-style building, and the work on the lower side of the building, County Engineer Gary Greiner assured the BoCC that “monitoring units will be installed on the north end of the building and on the courthouse so we can monitor any changes or shifts in those buildings. For the clerk’s break room, there are attached monitoring points to make sure any settling is tracked – the vertical and horizontal displacement.”

Discussions over the replacement of the Granite Bridge have been ongoing for months. Greiner said that they are awaiting the contract with Union Pacific Railroad, which borders the Arkansas River in Granite, for the legal land access for the work to begin on bridge replacement. Construction bids will go out at the end of February and the BoCC could review them in March 2022.

As the county prepares to launch the development of a new Land Use Code, the development community expressed the desire to have their views known and the county responded with County Planning Staffer Greg Laudenslager moderating a roundtable during the BoCC February 8 session. 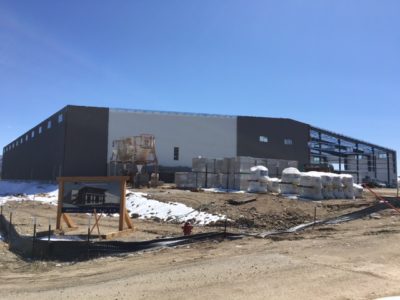 The Fading West Home Manufacturing plant under construction near the Central Colorado Airport in Buena Vista. Photo by Jan Wondra

“We want to focus on how do we make this work better,” said BoCC Chair Greg Felt. “We can’t talk about specific land use applications … we haven’t advertised this that way, but we certainly understand that the planning department is composed of individuals … that’s the case across all county government.”

The developers who spoke represented developers across the county, Walt Harder, Jeff Post, and Jed Selby, as well as Chaffee Economic Development Corporation (EDC) Executive Director Jake Rishavy. They noted they could point out examples that they feel have contributed to an adversarial relationship between the county and the developers working in the county. They added that in many cases, they have resorted to what they called “workaround techniques” to get things done and that their goal for the meeting was “to have you understand … we want a seat at the table as the new Land Use Code is developed.”

“We feel you need to understand Use-by-Right. You shouldn’t supersede the Land Use Code,” said Harder. “We need a solutions-based culture in the planning department —  working with developers and not against them.”

Commissioner Rusty Granzella reiterated, “My belief is in property rights, but I have to go by the Land Use Code – and if it’s within a reason, and fits under the LUC, I’m good with that for developers and people who want to use their property as they want to … as far as working together that’s always a process, about talking about it to find a solution.”

“Probably everything you said I agree with,” said Commissioner Keith Baker. “There are lots of things we could do better organizationally. Something in the near term is that the Dept. of Local Affairs (DOLA) has a ‘101’ for Planning Commissioners and boards that we should do every two years…I’m still hearing from Planning Commissioners who were onboarded two years ago that they haven’t had this training,” He added, “I want the LUC to do a better job of being specific about a lot of things. Right now it is silent on a lot of things. If we can have things in there that are use-by-right, it would surely clarify things.”

The BoCC pointed out that a core advisory group to the code development of around a dozen slots will include a few development representatives. But they pointed, out, these slots need to be filled by development people who can wear multiple hats (residential, commercial, rural and agricultural, and transportation, for instance).

“Our staff is here to help you, not to make the LUC easier necessarily, but to help you navigate it,” said Felt. “Regarding the LUC update review process … I’m impressed with the way this updated timetable and process has been laid out. It’s in chunks that all of us can manage … for me, it is incentive-based as much as possible. The LUC process that we’ve approved with Logan Simpson is going to have an advisory board of  stakeholders; 12-15 people of highly engaged stakeholders not to replace the public engagement, but to filter the solutions … and there will be room in that for the development community.”

“I want to be able to come to you with not just complaints, but some solutions,” said Post. “… I think that one piece of that is making sure there is the ability to have that involvement I know there is. I thought today’s work session was to air that dirty laundry with some solutions.” He went on to clarify “the other piece to that is within the use by rights, and what is a special use permit and what is that process … once a developer begins, we want to know pretty much what the process is going to be so we can depend on it.”

“Whenever the process is predictable, it’s navigable. When staff is geared toward cooperation, it works out,” said Harder.  “You’re doing a phenomenal job. But culturally that’s where the issue lies. I’ve done a lot of work here, but you do have staff that doesn’t want to cooperate. We’d like … things that are predictable and correct. I can work with whatever code you come up with – once I know the rules, I’ll play by the rules.”

“It is a major cultural shift across the board,” commented Baker about the collaborative process outlined to arrive at a new county LUC by late 2023.

“I don’t think the process we are attempting to engineer here, is only about the culture, its about how we’re going to approach this,” commented Felt. “This is as controversial as anything I’ve encountered so far here. On this meta scale, it is challenging and fraught with conflict and opportunity. If we can create the right culture around this, that’s going to do a lot – we’re all committed to spending a lot more time at the office to make this happen.”

“Could we let vision come in? What do we want our community to look like,” said Selby, who said he had recently met with the Multijurisdictional Housing Authority (MJHA). “If we can be clear up front on the type of development that our community needs — what could be green-lighted, that would be progress. I’m not sure why it feels as difficult as it does, but if there was a way to say ‘this project is awesome – let’s get all hands on deck, let’s make it happen’ — we could clarify what we want, and how are we going to put our heads together to make it as simple as possible. According to the the MJHA, we heed hundreds of units – now – how do we do that to meet those goals?

“We’re committed to keeping the culture here accessible to the teachers and firefighters, and those who work here – to live here, “said Chaffee EDC Executive Director Jake Rishavy. “We look forward to engaging in that process in a forward looking way…. It’s the most important work we’re doing at the EDC.”

“You hear that word balance a lot… taking the good things we have here and addressing the challenges we have as a rural community here,” said Felt. “I feel clearly that this whole board is committed to achieving the best possible outcome for long-term and immediate challenges.”

Editor;s Note: Ark Valley Voice had initially reported the 2020 and 2021 January construction permit figures as the full year permit numbers. We apologize for the error.