In an acknowledgment of the rapid growth experienced in a critical area of the county, the Chaffee Board of County Commissioners (BoCC) during its April 6 meeting, unanimously set a 180 day temporary moratorium on hearing new land use right of ways in the Nathrop townsite along U.S. 285.

The historic townsite, platted with small lots in the 1880s but now unincorporated, is an area of growing density outside the county’s municipal areas. Several requests to vacate alley and street right-of-ways that aren’t in use have come in, causing the BoCC to ask whether it’s wise to hear these applications without a clear view of what roads need to be preserved for the best use of the townsite for future development emphasis. 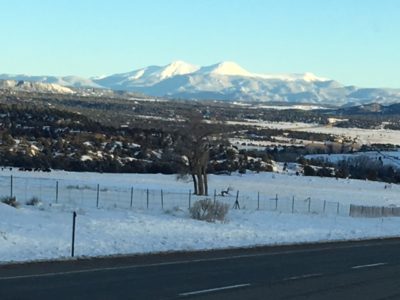 “We could look at the possibility of doing some sort of rural overlay district – we are being very careful with applications coming in based on the proximity of wells and septics to each other,” said Chaffee County Planning Manager Jon Roorda. ” We need 100 feet of separation between any well and any other well or septic. Staff supports this [moratorium].”

He added that even after the decision to put the topic on the agenda, the county had received another request for a pre-application conference on another road vacation in the Nathrop townsite.

Colorado state statutes specify that a county cannot create a situation where a property owner has no available road to their property. The moratorium would allow time for the county to develop a plan designating which roads could or should be vacated, which are necessary,  and how right-of-way decisions will impact traffic flow.

Commissioners decided that the county should bring in an independent consultant to offer an objective study of the townsite and the potential. They also agreed with the need to add a public outreach element, bringing the landowners into a discussion, with the objective to identify what’s already there, what is needed, and what the county’s commitment is long term. 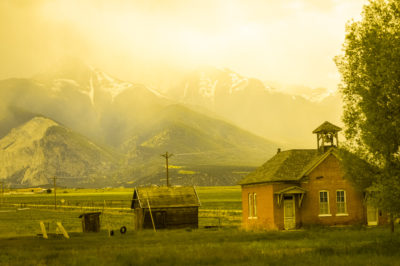 The area surrounding the Nathrop townsite is historic and scenic. Here, the old schoolhouse along route 285 looking over the southern Rockies near Nathrop. photo credit- S Hobbs.

“To me, my gut says the goal is to figure out which roads are critical, which to commit to for the long term, and ensure every property has access, but it is also to reasonably minimize the number of roads we are committing to,” said Commissioner Greg Felt. “There could be an existing road on the townsite plat not in use now, but it could be selected as the best solution.”

Unanswered in the discussion, but perhaps answered by a study, is whether by identifying them, would the county then be committing to these roads. Since the old Nathrop townsite is unincorporated, these are not town roads. At issue: who would maintain them? At present, there are some actual county roads designated, but in other cases people are driving where there are no official roads, and not using roads actually on the plat.

The county hasn’t actually accepted any new roads since the 1990s; most roads have been within the subdivisions being developed, managed by Home Owner Associations (HOAs). But at this point, the county actually owns all the Nathrop townsite right-of-ways. Any discussions or consideration of the Nathrop townsite would need to include the planning commission and the Chaffee Road and Bridge Dept.

Another reality is also at play. The county is undeniably growing.  County development staff has pointed out that Nathrop, situated right along U.S. 285, is the most developable of any of the historic townsites in the county. They have an inventory of the paperwork that has been filed since the 1970s, recapping which roads have been vacated and which remain.  The rights-of-way within the townsite itself could be the basis of a future master plan, or at the least a rural overlay district.