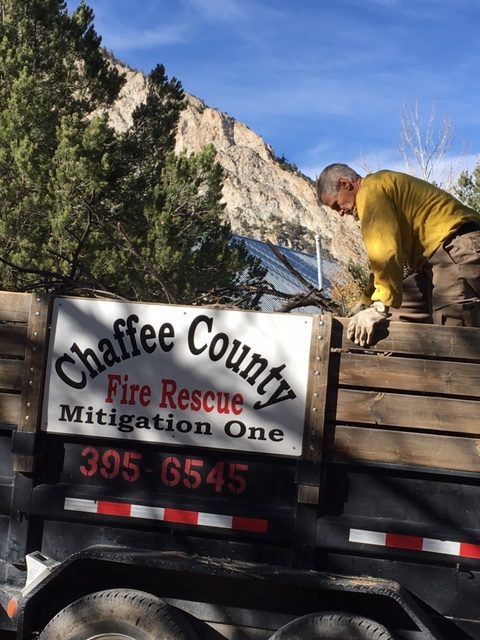 The Chaffee Common Ground Fire mitigation program known as Chaffee Chips is in the midst of executing its third of four fire mitigation events planned for this year. Over the past weekend, members of Chaffee County Fire Protection and the U.S. Forest Service and homeowners in the Chalk Creek drainage loaded more than 160 piles of slash as part of a massive fire mitigation effort.

The event got a setback on Sunday with eight inches or more of snow falling in the canyon, so the work could not be completed on Sunday. “No worries,” said Envision coordinator Kim Marquis, speaking on behalf of the Chaffee Chips program. “People shouldn’t worry, we’re going to get to everyone. The weather was a bit of a setback, but all the slash will be picked up, it will just take a little longer than planned.” 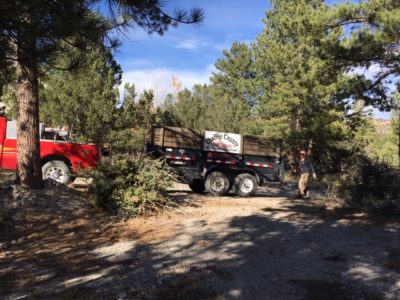 Beginning on the western end of the canyon the Friday through Sunday effort loaded tons of slash in trucks for hauling to the Chaffee County Landfill, where the county’s new industrial-strength grinder turned it into chips that can be used in landfill operations and buried as trash.

“We’ve seen growing participation with each event as more landowners work to cut and clear flammable vegetation from their home ignition zones,” said J.T. Shaver, a forester with the Chaffee Chips program. The need to create defensible space around structures doesn’t just improve forest health, it is critical to prevent the spread of wildfire in the urban-wildland interface of the canyon. Shaver estimated that about 80 homeowners piled slash in the Chalk Creek drainage as part of the removal program.

The Chaffee County Fire Protection District firefighters teams were a bit ahead of schedule on Saturday afternoon, working their way down CR 162 loading four trailers at a time. Students from the Colorado Firecamp were originally helping Chaffee Fire load slash, but by Saturday when they reached Shadow Lane, it was two trucks and a two-man Chaffee Fire Protection team. Several homeowners got out and helped the firefighters and their neighbors load their slash piles too.

In its first year, Chaffee Chips has been offered by Envision Forest Health Council partners to reduce the threat of wildfire in Chaffee County. Forty-one trailer loads of slash were hauled out of the Mesa Antero subdivision during the last event. The Chalk Creek Canyon trailer load totals will be announced as soon as the rest of the piles are gathered.

The program helps implement the Community Wildfire Protection Plan, which maps where to treat forest acreage for the highest community benefit. A third of the target areas are located on private property.

The Chaffee Chips service is supported in-part by Chaffee Common Ground. Contact info@envisionchaffeecounty.org  to find out how to get involved in this community wildfire mitigation effort.