The discussion between the Chaffee Board of County Commissioners and Chaffee County Sheriff John Spezze during the regular meeting  April 9, regarding his request that the county declares itself a Sanctuary County, did not end as much of the room of ardent sanctuary county advocates would have wished. County Chair Greg Felt resisted calling for a motion on the sanctuary request, instead, he called for the sheriff to join with county commissioners to take a leadership role in developing practical solutions to the public safety issues that had been raised.

“No county is stepping up right now,” said Felt, who went on to say simply declaring Chaffee a sanctuary county might make the pro-sanctuary county people happy. But he added that would not solve the practical concerns he had asked the sheriff to enumerate in his written request to commissioners.

“I recognize there isn’t a magic wand we can wave – but I don’t want this to be remembered as just talk. If you want to move forward with us, I’d like us to make a start,” said Felt. “We’re part of Colorado Counties Inc. and so far our advocacy group has totally stayed hands off this issue – guns are the third rail. We’ve grabbed it, and I’m glad we’re having this conversation. If you guys are truly in, we’ll make the time and the resources available and we can provide some leadership at the county level – and at the legislature level – to effect real change.” 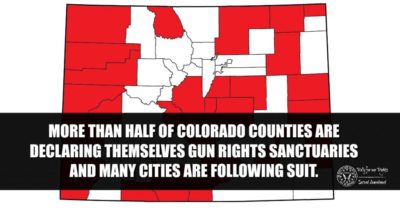 This landing page image of an opposition site (www.rallyforourrights.com/colorado-counties-say-we-will-not-comply-to-red-flag-law) incorrectly colors in Chaffee County as having voted in favor of becoming a Sanctuary County. While inside the site it references Ark Valley Voice: “The Chaffee County sheriff said at state Sen. Kerry Donovan’s town hall that he is in complete opposition of Colorado’s Red Flag bill, and he joined with the commissioners to draft a letter to the legislature pointing out 14 very specific issues with this legislation. The commissioner’s sidestepped the issue at their recent meeting and moved the issue to a public forum.”

There was no chance that the county would vote to become a sanctuary county, supporting Speeze’s stance that the county should declare itself exempt from enforcing Colorado HB19-1177 (commonly called the Red Flag Bill). It’s intent, to separate people in mental health crisis from guns that might be used to hurt themselves or family members. The bill was approved by the Colorado State Legislature and is awaiting Gov. Jared Polis’s signature. If signed, it would go into effect in Jan. 2020.

Felt (Independent) and Commissioner Keith Baker (Democrat) both of whom said they would not vote for sanctuary county status, made their viewpoints known. Even if Commissioner Rusty Granzella (Republican) had made a motion, it would have died for lack of a second.

Spezze’s impassioned request to commissioners was backed up by the presence of nearly the entire sheriff’s department He began by reminding commissioners of how well they work together.

“We’ve talked about my constitutional concerns with the law … with this issue, I want to tell you it’s important the public understand our relationship and how we work together and it’s been good …where I stand today, the constitutional issues out there will be decided in court one way or the other…[but] we have no resources to deal with this [law]. …We’re asking our men and women in law enforcement to become involved in a decision that we can almost guarantee a rise in confrontation – we’re not giving [the person with the mental health crisis] an honorable way out. When we go to their house and ask them to surrender their weapons, whether they do or not, we have to go back to serve them papers for a civil hearing. There will be distrust, they’ll be separated from the community. We’re putting our men and women of law enforcement at risk.”

Chaffee County’s stance and the thoughtful recap of 14 specific concerns with the bill lay behind a written statement issued to the entire Colorado Senate and to the governor. While there is no way to know the exact impact of the county’s comment, Polis has announced that he is forming a statewide behavioral health task force to look into the state’s gaps in mental health treatment options and the impact on the public and law enforcement.

Felt reminded the sheriff that the county’s letter of concerns, as well as one from the Pueblo BoCC might together have been behind changes made by the legislature to improve the final bill. “I saw a significant number of changes [to the bill] – search warrants, being able to withdraw the petition – the definition of possession of a firearm,” he said. “There was strength in language to encourage a judge to order a mental health evaluation, peace officer standards and a training board and model procedures. There was language added [that came] right out of our conversation about how to expunge this from a record, there was language relieving us from liability for acts and omissions and there was language added about malicious intent.”

“When I look at this from a safety, constitutional and law standpoint, it’s my responsibility to protect these people,” said Spezze. “Yes, there are constitutional issues, but if we’re dealing with the mentally ill, how do we work through this when we don’t get these people treatment? This is centered around gun confiscation – the one thing that shouldn’t have been attempted in this bill. That’s why I stand here now.”

Felt asked repeatedly for the sheriff to explain how declaring sanctuary county status would solve the problems Spezze described, without receiving a clear answer. “I think the question I have for you is do we want to continue [to work] as a team here?” asked Felt. “You already indicated that you do.”

He reminded the sheriff that the county has just authorized $250,000 outside the regular budget for new tasers and body cameras, a new jail camera system and is preparing to build a new facility designed to law enforcement specifications. “We’re paying your recruits at the academy. If there is more training your staff needs, we’ll look for it …we don’t have specialized legal counsel on staff in rural counties. Our mental health system is inadequate I agree. This will go to judicial review, hopefully, larger counties with larger legal budgets than us will lead this … I don’t expect you to mirror this feeling but I feel like I am standing with you on the issues, the implementation and the underlying problem.”

The public weighed in on March 19 at the commissioner’s Red Flag hearing and showered commissioners with letters. While it was announced that no public comments would be taken during the discussion, that did not stop some of the passionate, pro-sanctuary county crowd assembled from demanding to hear how commissioners would have voted. Both Felt and Baker said no, while Granzella talked his way to a ‘yes.’

“I don’t know what a Second Amendment sanctuary county is. There is no reference to this in the Constitution – no state statute. It’s not a legal term,” said Felt. “To me, this is an end run on the Constitution and the separation of powers … I don’t support the Second Amendment sanctuary status. I am crystal clear on this – I think honestly my colleagues in the other communities have made a mistake – it undermines us in the long run – it doesn’t address the problems. I am firm on this. I am making my solemn commitment to the police department and to the people. We’ve gotten pushed into a false choice here.”

“Is there anything in [HB]1177 that you feel restricts your tactical decision-making authority – to choose how you do things?” asked Baker, who indicated he could not support sanctuary status. “If a judge hears a petition, and determines it is appropriate for this person’s firearms to be taken away, is there anything that prohibits you from deciding what tactics to use or how to secure them?”

To which Spezze responded, “Tactically I don’t know how we’d do it. Philosophically, I don’t know if we stand together or apart with the other agencies. We’ll have to re-figure how we do things – take staff from the three agencies to put a team together. I haven’t gotten that far yet.”

Granzella did not seem to want to directly answer the question, pointing out that he “hated the sanctuary word.”

But, when pressed, he added, “This bill is really sad to me, it’s a life-threatening issue for both ends of the spectrum. We’re not here to decide the legality, to tell you how to do your job. I agree with you the state reps didn’t do their job. I’m against the bill, it doesn’t pertain to the mentally ill, it doesn’t help them, doesn’t affect a long term solution. I’ll try to be with other counties who want to pursue this and I’d be willing to join in the effort … it’s my responsibility to uphold the law, but some say my responsibility is to question the law … I’d prefer to be more a constitutional approval county, to make sure that statement is understood by our senator and our governor.”