The Chaffee County Canvass Board has certified the 2019 Coordinated Election Results. The findings change no results for candidates or ballot questions and set the final voter participation rate for Chaffee County at 8,278, representing 58.6 percent of the active voters in the county. 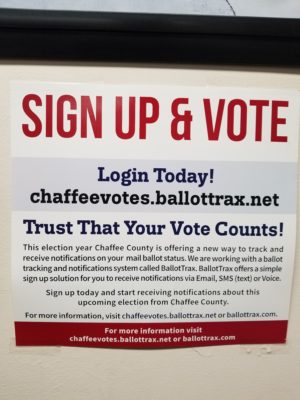 In a notification delivered to the Colorado Secretary of State’s Office, Chaffee County Clerk and Recorder Lori Mitchell certified that the Canvass Board for the 2019 Coordinated election had fulfilled its review, certifying the county’s performance of the required risk limiting audit, and an examination of all ballot forms and ballot logs. The Canvass Board also compared the number of ballots counted to the number of ballots cast, and reviewed and certified the Official Abstract of Votes cast.

Election results revealed that 8,145 voters, representing the vast majority of those who voted, returned their mail ballots. A total of 132 people showed up to vote in person, plus a single person who showed up to vote confidentially, whose vote wasn’t credited until after election day.

Some 570 of the mailed ballots were undeliverable, meaning the person was no longer at the address represented on their voter registration and there was no forwarding address.

Final count of ballots cast, broken out by school district:

Election day was busy, with 2,251 ballots coming in for processing on election day itself, representing 28 percent of the total ballots cast.