The news first appeared one day prior as a one-line agenda item for this morning’s Chaffee Board of County Commissioner’s (BoCC) meeting and became official this morning. Chaffee County Director of General Administration Robert “Bob” Christiansen announced during the December 6 BoCC meeting that he will be retiring after 30 years of service within Chaffee County government.

Christiansen says that he intends to conclude his employment at the end of February, 2023. 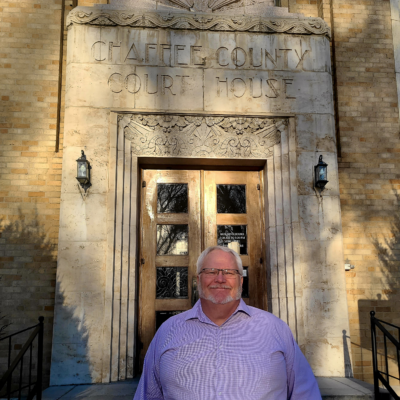 “It’s been 30 great years. When I started as administrator I said I’ll look at five years,” began Christiansen in his announcement, admitting that he could not bring himself to read his retirement letter out loud. “It’s time for someone else to come in and have a great career. We’ve got some great young hires, I’m thrilled to death to have that kind of legacy.”

He attributed some of his successful tenure to having great commissioners to work with over the past three decades, noting that great leadership also means good continuity. “I will, as I said in my letter assist in a continuity of operations. I’m not going anywhere, I’ve got some history, so I’m available for that.” He added, I’ve appreciated working with Dan Short. The guy is a gem.”

Christiansen noted something that the public might not know; he and long-time Director of Finance Dan Short grew up together in Sterling, and got their business degrees together. ” I came in in ’93 as Director Of Human Services and he came in as the Director of Finance. He kept picking at me to consider the Administration position and it’s been a great adventure.”

The BoCC all praised Christiansen noting they would have more good things to say come his actual departure at the end of February.

“It has been a pleasure working with Director Christiansen during my term,” said Commissioner Rusty Granzella. “Bob has been a stellar leader for Chaffee County. His professional demeanor, his patience, and his ability to effectively support dozens of different elected officials across the political spectrum is a testament to his dedication to Chaffee County and our residents. Bob has been the ‘go to’ person in both good times and tragic times, and we are so grateful for his service all these years.”

“I know the public isn’t aware of the role that both you and Dan play in the interagency collaboration of the county with Salida, BV, and Poncha [Springs],” said Commissioner Keith Baker, who complimented the many hours Christiansen devoted to getting him up to speed when he first came on the board. “We’re much better off than some communities are because of that collaboration.”

“We’ve invested in that process and I hope the new generation of administrators will do things to foster that,” agreed Christiansen. “It’s not about competition with each other. It’s about working together.”

“I would just say that I probably sat down with you and Dan almost every workday unless I was out of town for the last six years,” said Board of County Commissioners Chairman, Greg Felt. “These have been some fantastic conversations – some real laser-like moments to cut through stuff and figure out where the priorities should be.”

Christiansen began his career with Chaffee County in 1993 as Director of Human Services (DHS), leading the DHS department for 14 years before being hired into the Administrative Director position in 2007. He has been responsible for general county operations, policy implementation, and fiscal management under the direction of 15 different county commissioners during his 16-year tenure in this top local leadership role.

In addition to his strong dedication to the county’s public sector service, Bob’s passion for supporting youth and families has guided his professional path and life-long volunteerism. Few know that he was co-founder of the Chaffee County Boys and Girls Clubs and the Chaffee County Mentors, as well as serving as Chaffee County Build A Generation Board member for seven years and helping initiate the Chaffee County Family Youth Initiatives program in 1998.

“For decades, Bob Christiansen has been synonymous with Chaffee County Government,” said Felt. “I’ve had the privilege of working with Bob the last six years as we navigated challenges like wildfires, pandemics, and gas outages, but also more positive opportunities like the Envision process, passing a conservation finance measure, and ramping up forest health initiatives. Through it all, he has been a voice of experience, encouragement, and guidance. I will miss working with him tremendously!”

With a chuckle, he added, “I debrief every night cooking dinner with my wife, and the three-letter word “BobandDan” has been uttered hundreds of times.”

“I have seen a great deal of change within Chaffee during my three decades here. Since I started with the county, our population has increased by more than 70 percent, schools have expanded markedly, many new neighborhoods have grown and flourished, and the resulting demands on county services have grown substantially,” said Christiansen sharing his perspective on his time working within the county.

“The constants throughout this whole period have been the incredible spirit of our citizens and our community-minded approach to shared challenges, as well as the tremendous support I’ve received from the Commissioners, my colleagues, and especially my family,” he added. “It’s been an honor to have dedicated my career here, and I look forward to seeing the next generation of leaders help Chaffee County thrive.”

“This is a big milestone in the history of the county,” said Felt. “Hopefully this starts a good process to go on to the next chapter.”

The County and BOCC intend to open a national search for the Director of General Administration position by early January 2023.