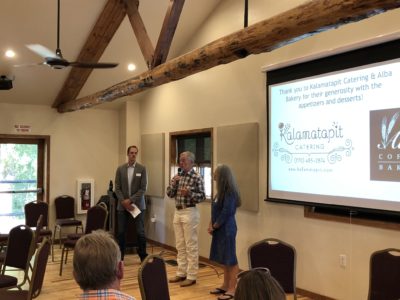 Cooper started the evening off recognizing the day —  Sept. 11, 2001 — the 18th anniversary of when planes struck the Twin Towers in New York City, the Pentagon, and Somerset County, Pennsylvania.  He then shared a personal remembrance story and commemorated that day with a moment of silence.

Cooper introduced board members and explained how everyone had come together to make the foundation possible. “One of our goals is in supporting nonprofits and have healthy nonprofits in this community,” said Cooper. 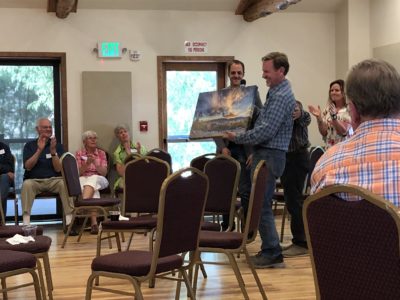 CCCF particularly highlighted the efforts of founding Executive Director Michael Hannigan and recognized his service towards creating the foundation.

Hannigan continued, “The fact that one of us might know a smidgen more than a few other people is just the catalyst that gets everybody to say, ‘we can do this.’ Thank you to all of you. You make this community worth living in, we love it here, we love the people here. Joseph [Teipel] is the future and to have young people [like him] come back to this valley is priceless, so thank you.” 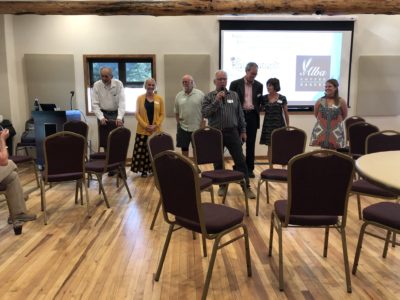 Commissioner Baker and Evelyn Baker explained how CCCF came into being and cited the community benefits of a common path to philanthropy.  Dominique Naccarato expressed thanks for the boost given by CCCF to GARNA.

Joseph Teipel concluded the evening by sharing the year in review and stating that the CCCF is excited about the future. “Our mission is to increase capacity-building resources for nonprofits and community members in Chaffee County. One part of that is [increasing] the philanthropic side.”

Teipel concluded, “We all gain immense value from this place, do we not? We live in a beautiful place. We at the CCCF want to elevate the benefit that we all get from this place and raise the question, ‘How are we all, everyone interacting with this place, giving back to this place?’ We all have a responsibility in making and maintaining this community.”