Delegates were elected to the Chaffee County Assembly. A total of 29 will be attending the county assembly, scheduled for 9 a.m. Saturday, March 17, at Poncha Springs Town Hall. Observers are welcome.

A number of resolutions were submitted for consideration at the county assembly. Many concerned health care, public lands, gun violence, the Citizens United ruling, immigration, gerrymandering, global warming and sexual harassment in the workplace. Several resolutions aiming to abolish the caucus system were introduced. 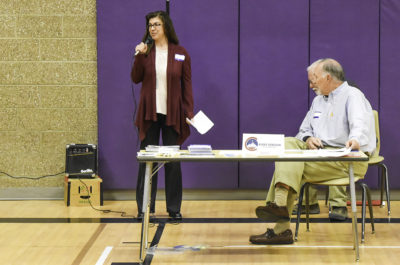 Candidates who spoke at the south county caucus included Kimberly Parker, county commissioner candidate in Precinct 3. As a member of the Housing Policy Advisory Committee, she chaired the First50 working group representing community members with incomes below 50 percent of area median income. She said she believes innovation and thoughtfulness should be brought to bear on the complex social, economic and environmental problems Chaffee County is facing.

Erin Kelley announced her candidacy for House District 60. Kelley said her legislative experience has taught her the practical skills required to move legislation through the political process, which would benefit HD60 citizens. Kelley currently serves as secretary of the Chaffee County Democrats.

County Clerk Lori Mitchell is running for re-election. She said her focus will be on fair and transparent elections with superior, innovative customer service for the citizens of Chaffee County.

Jeff Graf is running for county coroner. He has served as Chief Deputy Coroner for the past 16 years. He said he believes that compassion and the knowledge to get needed answers to loved ones is the chief duty of the County Coroner.