The 2019 Chaffee County Fair continued Thursday morning with the Swine and Sheep shows. Some 24 hours after weighing in their prized animals, 4-H exhibitors took to the show ring with pride and genuine excitement.

“It was great,” said first-year exhibitor Ben Hatfield after completing his second showing of the morning. 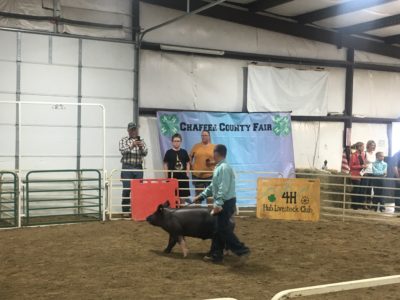 “I didn’t really think I was going to win,” recalled Hatfield, beaming. “I was worried, but the judge said, ‘I really like this pig.’ I’m excited to show again.”

Though Hatfield experienced success in his first year of exhibiting, he recognizes the room he has to improve.

“I’m going to try to get [the hogs] loosened up a bit more before the show, and get their heads up a bit more,” explained Hatfield. 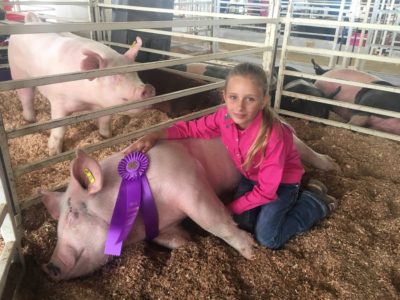 Rivers Hill was awarded the Grand Champion title for her 278-pound hog.

The championship drive features the winners from every class. Though only two winners were selected as grand champions, the final drive displayed animals of excellent quality.

Shelby Teague, the Swine Show judge, praised the quality of the exhibitors and their animals following the championship drive.

“This has been a very, very high-quality show,” said Teague. “There are very few counties that can put together a show championship drive like this.” 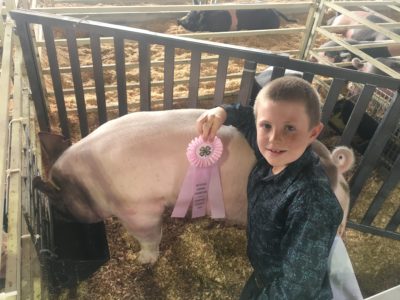 The Sheep Show, though a smaller field than the Swine Show exhibitors, also followed through with high-quality presentations.

Evelyne Cope was awarded the Grand Champion ribbon with her lamb weighing in at 154 pounds.

Teague spoke briefly to the attending crowd about the benefits of 4-H programs and the lasting impact it has on youth.

“The opportunities and the memories that these kids get to learn and have through 4-H… you can’t replace with anything else,” said Teague. “Regardless of whether these kids are going to go back into production agriculture, or whether they want to be doctors and lawyers; the memories and the skills they learn from these projects are irreplaceable.” 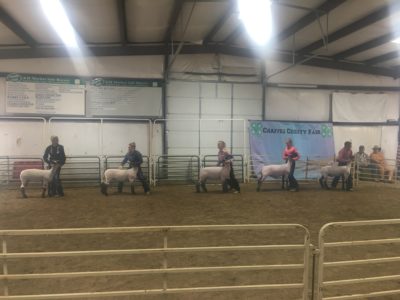 Exhibitors show their lambs in the Sheep Championship Drive. (Photos by Merrell Bergin)

Teague, a Fort Morgan native, works on her family’s diversified agriculture operation. Teague’s responsibility is to manage the feed yard; where they sell between 500 and 1,000 head of cattle to feedlots across the western United States.

Teague remains involved in 4-H and county fairs by serving as a show judge and filling other capacities. Teague pointed to another individual, a CSU extension office intern, as a prime example of 4-H leaving a lasting, community-centered impact.

Now an intern, the former 4-H exhibitor from Chaffee County is working to facilitate 4-H experiences for children in the same community.