The results of the Feb. 25 joint work session of the Chaffee County Planning Commission with the Board of County Commissioners have been more than a year in the making. But in the end, the planning commission recommended that the county adjust its Land Use Code definitions for stables and equestrian centers, and dropped its ten-year-long 500 ft. setback requirements for marijuana grow operations in industrial zones.

What began months ago as an attempt to define “outfitting facilities”, after resident Dave Moore made a citizen text amendment proposal to adopt the definition used by the state, evolved over time into a discussion related to the county’s definitions regulating all types of uses. 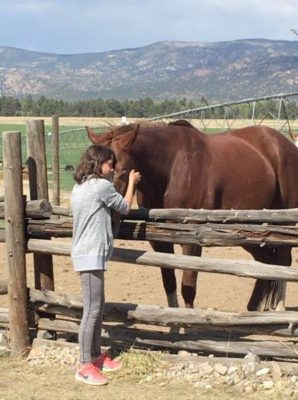 Addison Verrier and one of the horses in the 51:10 youth program. Photo by Henry DeKam.

After a lengthy discussion, the Planning Commission decided to drop definitions for private and commercial stables, and settled on defining two classes of equine facilities based on numbers of people using them.

The second, a combination of equestrian center and what was formally called “commercial stable” as involving any equestrian activities above the numbers that identify private stable activity.

The effort was led by insight from Planning Commissioner Bruce Cogan, who initially said he wanted to see the term ‘stable’ entirely removed from the land use code definitions, suggesting that ‘small center’ and large center’ might be more descriptive.

“I want to see the term ‘stable’ removed entirely. Boarding is indistinguishable from normal ranching activity. Boarding by itself is a pretty low impact activity. Stables are related to horses – we move cattle, we used to have a group of people helping us move cattle. That might be a traffic jam [of people] … but otherwise the impact isn’t the horses. If we use ‘center’, a small center would be a local 4-H club shows up for a ride. A larger center is the same only involving more people.”

That suggestion prompted some objections. Planning Commissioner Marjo Curgus reminded the group that unless the stables or equestrian centers are in rural areas on larger parcels, the impact of a rodeo next to small, rural but residential parcels is disruptive. “I want to make sure we’re making a distinction on what is a ranching activity – and what is someone starting a business. Do they all happen in the same places? If we look at uses and where they happen – we can figure that out.”

The discussion moved to debating whether stables or equestrian centers might be in industrial area, and how much regulation should be applied. The group was reminded that the Chaffee Land Use Code will be reworked in the next year after the new Chaffee County Comprehensive Plan is approved.

Commissioner Greg Felt said “I thought I knew what a stable was, but I’m starting to wonder – under the private stable definition [on this document] is it anywhere where you have a horse?”

“According to the state, ‘A stable is a place for feeding and housing livestock’,” said Cogan. “ All I’m trying to do is prevent some regs [regulations] that trap people for doing nothing out of the ordinary.”

The group moved on to the text amendment request that would adjust the county’s 500 ft. setback requirement from houses, required of marijuana grow facilities in industrial zones.

Chaffee County’s 500 ft. setback is the strictest in the state of Colorado. Within this county, it far exceeds even the setback requirements for mining operations. It was put in place ten years ago when the state first legalized marijuana grow operations and at the time, county leadership was unsure what impacts there might be and chose to proceed cautiously.

The request, made in Oct. 2019 by Pure Greens, pointed out that the requirement prevents them from using the front one third of their property. The document filed with the county pointed out “There should be no setback for land that is already in the industrial zone (the only zone where these operations are permitted in the county). “The 500 ft. setback is effective condemnation of a large portion of the property at the will of a single property owner.”

Research provided by Pure Greens reveals that other Colorado counties with grow operations in industrial zones have no where near the setback requirements that Chaffee County has enforced.

The other county that even comes close to Chaffee requirements is Eagle County, with a 200 ft. setback. Denver’s setback is 100 ft. San Miguel and Adams require a 50 ft. setback. Gunnison, Larimer, Park, Pueblo, La Plata, San Juan, Ouray, Pitkin, Gilpin , Crowley and Boulder counties have no setbacks at all.

The Planning Commission decided to drop the specific set back requirements for marijuana grow operations entirely, saying that the industrial zone is intended for industrial-type operations and this operation should meet those same standards.

It did determine that establishing some mitigation requirements for concerns such as odor, noise, and light impacts could be attached to licensing and permitting. “

“This is just another industrial operation, so set backs in the industrial zone ought to be the same, regardless of industry,” aid Planning Commissioner Anderson Horn.

The main topic of the Planning Commission regular meeting, the review of a business development application for a three-part limited impact review for Aspire Tours was continued until March 31, at the request of the applicant.