Chaffee County Prepared and Ready for the 2020 Census 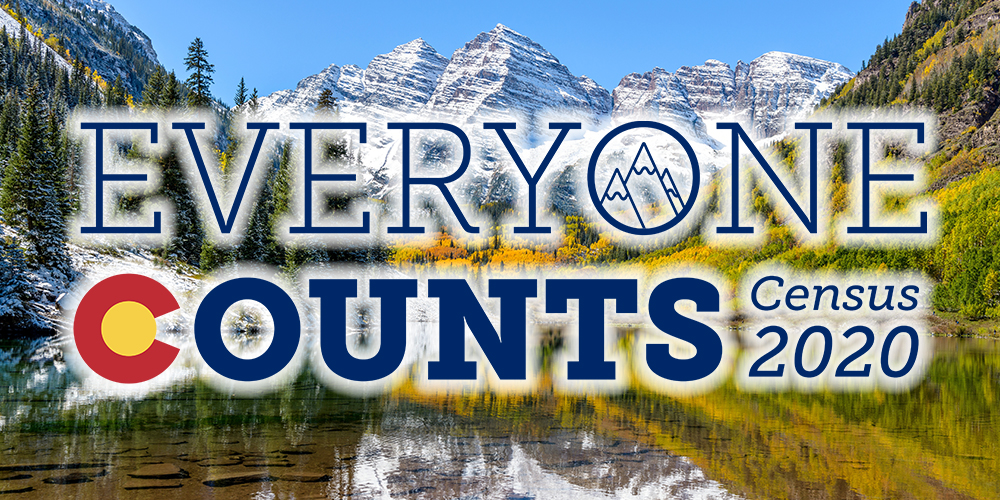 The Chaffee Board of County Commissioners unanimously approved and signed a 2020 Census Proclamation last week declaring the county’s strong support of, and partnership with, the U.S. Census Bureau to ensure an accurate count in the upcoming 2020 Census. The action, say all three commissioners, reinforces the importance of the results of the 2020 Census to the county, and establishes official support for census efforts.

“We’re working quickly to ramp this up in the county,” said Chaffee County Commissioner Chair Greg Felt. “We have set up what we call a Complete Count Committee in the county, and there will be a full court press on this from now through the end of March. This is critically important to our county and and we need an accurate count. Even if we don’t get people counted, they are still going to need services. It’s like our health – if there’s a problem we want to know about it!” 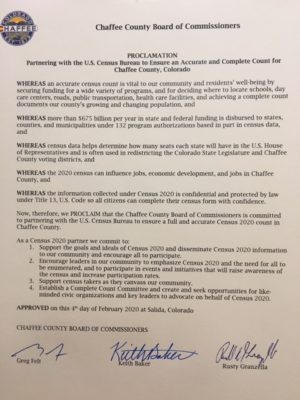 The importance of an accurate count to the county’s ability to provide the services that residents expect cannot be overestimated. The numeric results of the census are used to determine the funding the county receives for everything from transportation and road projects to health care and mental health services, support for economic development and human services and school programs. It is used to project growth rates for economic development, and even to determine where new schools or health care services should be located.

“The State of Colorado says the census directly impacts funding for 55 programs within the state and the allocation of multi-millions in federal funding within this state,” said Commissioner Keith Baker. “In fact, according to George Washington University, for every person counted, the national average of which also might mean that for every person missed in the census count, a county loses that same $1,260 in funding. While more than one estimate of the worth of the funding based upon census counts varies depending upon the source, the latest figure of the value of the census to U.S. counties is $675 billion (with a “B”).

Chaffee County got an example in the past two years of the importance of population growth to funding, when the county’s population tipped past 20,000 – which turns out to be a threshold population number. That opened the door for the county to qualify to back private equity bond funding that can be used to create workforce housing projects.

Aside from funding and program support, this 2020 census has another value specific to Colorado. With the obvious population increases delivered by the state’s booming economy, Colorado stands to pick up an additional congressional seat as a result of this census.

The 2020 census will be taken electronically between late January and March 30 with the goal of counting everyone, once, in the right place. The first area to complete the census was Tooksook Bay, Alaska.  It’s important that people realize that this time, there will be no letter arriving to tell them to fill out a paper form. Census Bureau temporary field staff are working in neighborhoods across the United States to conduct surveys, each using a laptop computer.

“We need everybody to stand up and make sure they and theirs are counted,” said Commissioner Rusty Granzella. “When they are counted they are making a 20,000 foot decision to help the county make sure that everybody in this county is counted. This is important in so many ways. so my message to Chaffee is ‘please get yourself counted.'”

The county has notified residents that Census field staff will also be knocking on doors in order to verify addresses and gather information on additional living quarters. All Chaffee Census employees will have electric devices with the Census logo, a black Census canvas I.D. and Census identification.

It’s important to note that the Census does not ask for social security numbers, money or bank account information. So do not respond to any such request from anyone who might attempt to pose as a census-taker. Residents with questions can call 301.763.1716.