A Monday, April 15 meeting of the Chaffee County Wildfire Protection Plan (CWPP) leadership team was productive, as the team worked through action steps identified as the result of the Community Wildfire Survey it conducted earlier this month. Based on information garnered in that survey, the leadership team established six areas of work necessary to solidify a wildfire protection plan.

The session and the plan that will result is part of the continuing efforts of Chaffee County Common Ground – the name given to the efforts which will be funded by the voter’s approval in the November General Election of Ballot Issue 1A. This multi-pronged effort will protect the three-valued county natural assets of Chaffee County residents most value: working lands, balanced recreation, water and forest health and wildfire protection.

The Chaffee County Wildfire Survey was completed by 1,035 people, representing seven percent of county residents over the age of 18. While participation across the county was broad, statistics reveal it might have a slight skew among individuals who are older and with a higher income, simply because there was lower participation from the 18-34 age group.

One striking survey result was that while there is a high degree of awareness of wildfire – 80 percent thought a major fire might happen in the next five years – wildfire preparedness lags far behind. Only 40 percent of residents have an evacuation plan, and 44 percent are confident they can easily get information in the event of a wildfire. A startling 46 percent have not registered for the county’s reverse 9-1-1 notification service, called Everbridge. 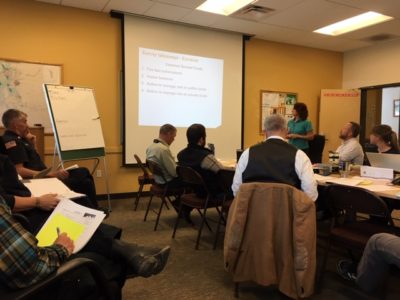 More than half of all survey respondents are unclear who to even contact about decreasing wildfire risk, which does not bode well, given that the survey might already contain a bias toward more “engaged” residents based on the age skew of respondents.

One of the more concerning aspects of the survey is the fact that “private landowners seem to have little sense of urgency to act to remove vegetation or to change the characteristics of their home to protect their residences from wildfire.” While nearly 90 percent said they had taken “some action,” it appears that a majority of respondents wanted more information about what to do. Many respondents seemed to think that those actions should be taken by their neighbors, and not by them. One other strong finding is that residents appear to strongly support the idea of wildfire-related provisions in the county’s building codes.

The survey revealed a dichotomy between average citizens and professionals regarding perceptions about public lands. While residents said forest health was “fair,” professionals ranked county forest health as “poor.” That ranking by professionals’ opinions appears to be based on knowledge of the advancing beetle kill epidemic, high forest density and fuel loads, as well as long-term fire suppression policies and the impacts of drought and climate change.

Another odd survey finding regarding forest health is animosity toward recreational uses of county lands by visitors. In fact, it was listed as the second-highest threat to forest health.

In response to the survey results the assembled U.S. Forest Service, countywide fire departments, the Chaffee County Office of Emergency Management, county commissioners, Colorado Parks and Wildlife offices, together with Chaffee County Common Ground leaders, began to draft an updated fire risk protection plan. A first step is the development of a list of employers in the county with the most employees. Team leaders call them “critical infrastructure” because of their economic impact.

“This county is about tourism,” said U.S. Forest Service District Ranger Jim Pitts. “If you close down or evacuate the county the implementation of that is huge. Even just the smoke impacts and the health implications are huge … Let’s brainstorm on what the story is we need to tell and put it into the CWPP.”

Next, the group worked through a half dozen impact areas where they saw a need for action based on the survey results. They included:

1.  The public does not know where to go for mitigation help, so an outreach effort is needed to educate them on the need to mitigate and what resources are available. “I was thinking something along the lines of the “Code of the West,” said Commissioner Keith Baker. “Letting them know the risks.”

2. There appears to be support (based on survey results) for use of county codes to reduce fire danger to homes. The group noted it could partner with insurance companies to update county building codes and consider reviewing both land use and building codes as part of the upcoming Comprehensive Plan update. “We should think about becoming a ‘fire safe county,’ “said Commissioner Greg Felt.

3. The survey revealed significant resident anxiety over the impact of visitors on increased fire danger. Particularly noted were the actions not just on campfires on public lands, but the thoughtless actions of visitors in short-term rentals and negligent use of private property. There was strong support for writing stricter property use into the county codes to protect residents from visitor ignorance or willful flaunting of fire safety.

4. The group expressed support not just for a new push to get residents to sign up for Everbridge (the reverse 9-1-1 service that requires people to register), but for the county to transition to 21st Century advance warning technology. Such a service would automatically notify any cell phone that is within the county area in cell phone range, regardless of carrier, about fire or other emergency situations.

5. In reference to private lands, the group agreed more education is needed to raise resident’s knowledge about treatment to reduce fuel loads on private lands and along evacuation routes.

6. Regarding public lands, the group agreed that the public needs more information so they understand the continuing efforts underway by state and federal agencies to reduce fuel loads on federal lands and to protect water supplies.

The day’s efforts will be prioritized based on the degree of difficulty to accomplish and community impact. While some actions such as a public relations campaign to educate the public on rural wildfire dangers, they may require more resources to accomplish. With priorities established, action plans will be developed for action areas as the group continues to work toward a full CWPP designed to reduce community risk from wildfire.