Housing has been one of the hottest issues in Chaffee County since 2016, when a housing needs assessment provide the statistical background for what county residents already knew; we need more workforce housing. The Housing+Health 2020 Spring Speaker series kicked off with two events by the leader of the “Strong Towns” Chuck Marohn, who had a lot to say about how communities should be looking at housing.

The- “Strong Towns” movement – and it is an international movement – calls itself a ”bottom-up revolution to rebuild American prosperity and make your community stronger and more prosperous.” At its core, its focus is on supporting development that makes communities financially strong and resilient. Apparently not all development actually accomplishes that.

Marohn began the public presentation at the SteamPlant by reminding the audience of how housing in most towns and villages started – and how democratic the center of towns were.

“Every village and town started the same way – from the center. There was always a place for someone to start – a price point for everyone within this framework – a way for everyone to benefit from their own labor, their own actions,” said Marohn. “The community as a whole rose together. This type of system is organic.”

Marohn went on to describe the basic way that all small towns start; a town site plat is set up, businesses begin, with families living above the shop. Rooms are added on, bigger buildings replacing smaller buildings, infrastructure begins to lift wheels out of mud, puts sewer and water and electricity in homes. Streets are paved and widened, transportation methods are improved. City centers occurred naturally and they tend to focus on a small cluster, just as Buena Vista and Salida began.

“This is a human habitat designed to take our inclinations as humans and put them into a system,” said Marohn. “So that when we do things for our own net benefit – it also benefited everyone around us.” 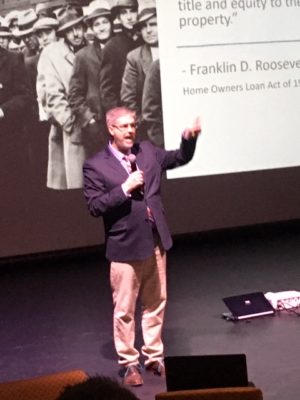 But at some point, especially after World War II, things began to change. City structures began to sprawl – creating a 20th and 21st century problem.

Communities that don’t mix housing, economic livelihoods, and access to services, create economic inequity – and they then have to invest in more infrastructure. According to Marohn, that is unsustainable.

“For generations, North American communities have been growing—or at least, they’ve been building,” explains Marohn. “But as we’ve paved endless roads, raised countless buildings and put more and more infrastructure in the ground, we’ve given almost no thought to whether future generations will be able to afford to maintain the world we’ll leave them with—or how many of the things we build are making our communities worse places to live today.”

According to Marohn, what he presents is nothing less than a radically new way of thinking about the way we build our world – or at least our cities and towns.

“To truly thrive, our cities and towns must stop valuing efficiency and start valuing resiliency. They should stop betting the future on these big, irreversible projects that add miles of pipes and streets, and make smaller, incremental steps, adding more vibrancy and resiliency to the center of town.”

He rejects the idea that for a municipality to be economically viable that it must sprawl endlessly. “What Strong Towns advocates is a human habitat designed to take our inclinations as humans and put them into a system,” says Marohn. “So that when we do things for our own net benefit – it also benefited everyone around us.”

He pointed out what many planning organizations know; that when the economic impact of different types of development are analyzed for their input into municipal covers, it is not the big, flashy developments that are delivering the most in sales tax and revenue; it is often the humble hodgepodge of small businesses that have grown side-by-side organically through the decades that are generating the most income for public coffers. That mix is also what make vibrant neighborhoods, those that mix living and working and playing.

“In the strong towns concept – I would describe it as a city-centric plan – all the development would be in the town or city. Stop sprawling – the goal is to make our cities as strong as possible – which is where you can get the greatest amount of resource with the lowest cost.”

According to Marohn, the buzzwords “density” and ”infill” aren’t just way overused, they represent a misunderstanding of the Strong Town’s message. “Stop obsessing about future growth and start obsessing about your town’s current finances,” said Marohn. “When your infrastructure goes bad – you are unlikely to replace it – it just goes away. How would your city look without half the roads it has?”

Most importantly, says Marohn, is that strong towns and cities get built collaboratively. He adds that strong citizens from all walks of life can and must participate in a Strong Towns approach—from citizens to leaders, professionals to neighbors, and everyone in between.

“Think of it this way – then look at impact fees…why are you charging them? All of those become less pressing than the current concern of getting key parts of the community vibrant again. Don’t eliminate all impact fees – take the core downtown and all around it that could be walkably-connected to that area – and get rid of all the impact fees there. Then take everything outside that and double the impact fee – those are the areas that are having double the negative impact.”