The approval came with a lengthy list of findings and conditions and revealed that two of the county’s major issues; related to the preservation of water quality, and multi-model transportation planning, remain unaddressed by this proposal.

As divided by the proposed plan:

The proposed major subdivision application is being made by D&G Sparks FLP II (Todd Sparks) and First Son Development (Bruce Kramer). The developers were complimented for their efforts to maintain wildlife corridors and wintering grounds, as well as preservation of open space. 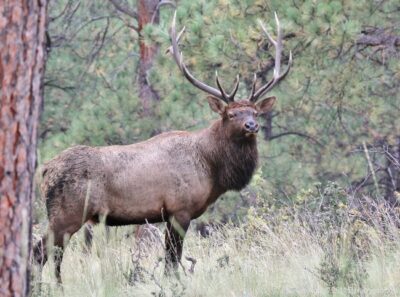 Photo by David Hannigan via CPW.

“We’ve been working on this for some time and adjusted many things about this from the start,” said developer Bruce Kramer. “We adjusted the density and sensitivity to wildlife. We’ve tried to have a good balance, with very little visual impact where [CR] 340 and [CR] 361 go by the property.”

We’ve had positive response for the size of lots, and the way it fits the terrain. we are sensitive to the water questions for the town of BV,” he added, indicating that he has met with town representatives. He added that he’s lived in the county since 1977, and his development goal is that it enhances the county. “That’s my Reader’s Digest version,” he concluded.

But among the proposed condition of approval are requirements that the applicant will work with the county engineer regarding the traffic study, and a drainage report and requirements for the retention pond. While Chaffee Planning Manager Jon Roorda, said there weren’t any trails or problems related to transportation, Chaffee Transportation Advisory Board (TAB) Chair Kate Garwood corrected that assumption.

“Regarding the transportation study, we haven’t received anything, nor is it accurate that there are no TAB agency comments,” said Garwood. “For the record, there is a trail on CR 361 that connects to the north to the Colorado Trail, and on CR 306 it connects to Cottonwood Pass. We would like to offer comments, but the way the current Chaffee Land Use Code is written, we can’t get the chance until the final plat. So it’s not that we won’t comment, it’s that we don’t comment until the final plat.” 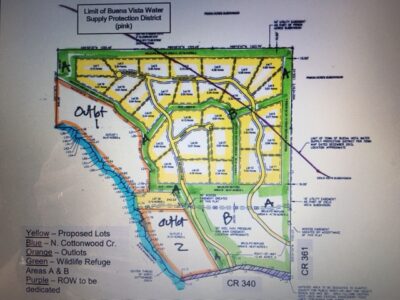 Concerns about water quality continued to be raised by the town of Buena Vista Public works Director Shawn Williams. The water table is of concern, the out lots include 100-year flood plains of North Cottonwood Creek, and some of the lots will be required to be raised two feet due to that flood plain and the shallow water table of the area.

The final plat for the subdivision will include this condition: “All On-Site Wastewater Treatment Systems (OWTS) shall be designed by a Colorado Licensed Professional Engineer. The OWTS shall meet design requirements in the Buena Vista Source Water Protection District.”

“I want to emphasize the hydraulic report within the water section. The county has requested more review on traffic and the water supply protection district,” said  Williams. “Based on our setback requirements, our question is how hydraulically connected is this to the town’s water source? We want to be able to review that so the community’s water supply is protected.”

“Sometimes this exceeds the simplistic,” he continued, reinforcing the importance of pursuing answers to his questions. “We want to know where the water is traveling and where it is going? If it’s coming into the town’s water supply, we need to know that. In most cases, onsite wastewater treatment systems can do that, but in this case… we need to know.”

During pubic comment, nearby resident Neil Movitz brought up concerns about water production “We’re all concerned about the water…  in the agency response the Colorado Division of Water Resources projects the [new] wells to produce two to five gallons per minute. Right now the wells in our subdivision get 10 to 20 gallons of water per minute. Will our wells deteriorate by 90 percent then? We’re not happy with that risk.”

But that Colorado Division of Water Resources Report also concludes that “the proposed water supply has the potential to meet the demand,”  without saying that that rate is to a sure thing,” he added.

Other questions raised include requirements for the preservation of a historic structure on the property. While it is referenced and the developer indicates that would be something they consider important, there is no legal application in process for historic declaration.

Planning Commissioner Sarah Anderson raised the question, that since no privacy fencing will be allowed, what would prevent resident’s pets, especially dogs, running about to disturb the mule deer and elk grazing areas. Roorda responded that the development’s covenants could cover that, but that it was required according to the agency comments from Colorado Parks and Wildlife.

Planning Commissioner JoAnn Allen asked if the out lots could be further subdivided and what protections for the wildlife areas would be in place. Roorda assured her that “the applicant has committed to a prohibition on the out lots and no further subdivision of the lots being created. There will be covenants that you can’t build on [the out lots], there will be conditions on the plat for perpetuity … we have a good process to make sure this happens.”

The group agreed on a final provision that any covenants now and future, related to the development be consistent with the final conditions placed on the subdivision approval… (for example, a fencing covenant, wildlife standards, or a riparian standard.)