Planning commissioners approved the Schwitzer Major Subdivision Sketch Plan. The proposal would subdivide 9.8 acres into two lots, with the minimum being 3.78 acres. The rural-zoned parcel owned by Irene Schwitzer is located at 10350 County Road 155, Salida. While the lot size isn’t large, this parcel had already been subdivided using the minor subdivision process, so further subdivision had to be done by the significant subdivision process.

During public comment, questions were raised about the public nature of CR 155, and how public maintenance of the road ends 50 feet from its intersection with Happy Jack Lane, which is precisely where the driveway to the new lot would be located. Motion to approve was made by Planning Commissioner Hank Held seconded by Planning Commissioner Bruce Cogan and passed unanimously.

The Hawkins Minor Subdivision Final Plat was reviewed, a rural-zone project located at 16556 Rocky Mountain Road, Salida. The proposal would subdivide 9.14 acres, some of which include steep slopes, into two lots with the minimum size being 3.07 acres. The parcel intersects with the North Fork Ditch. 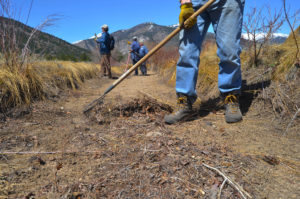 While the sketch plan was approved in May, at the time a drainage report was required, which also showed that in addition to the North Fork Ditch, a portion of the parcel has drainage running through it that needs the Colorado Geological Survey to weigh in on the plan. While there was a neighbor request to maintain an access point across the property to the Bureau of Land Management (BLM) land, planning commissioners declined to add a plat note to that effect, since the parcel is not itself adjacent to the BLM land.

During public comment, one of the North Fork Ditch owners, Frank Holman said, “I’m not opposed to the project, I just want to make sure that the ditch trail remains so that we can maintain the ditch.”

The final action of the evening by planning commissioners was to approve the Morrison Minor Subdivision sketch plan. Earlier that day, Chaffee Board of County Commissioners had approved the Morrison Heritage Water Subdivision Exemption, located at 15974 County Road 306, Buena Vista, which created what was called “Outlot A.” Following that approval, Morrison was free to request that the 6.28-acre Outlot A be re-designated as Lot 3 (the third lot of his parcel at that address), turning it into a buildable lot through the minor subdivision process.

While all lots are near Buena Vista water and sewer, which runs along CR 306, the land is officially county-land, not town-land, and is not required to hook up to town water or sewer. The motion to approve was made by Planning Commissioner Marjo Curgus, seconded by Cogan, and passed unanimously.