Late on Friday afternoon, July 16, the consumer protest organization calling itself Unbottle & Protect Chaffee County Water (“UPCCW”), a Colorado non-profit corporation, delivered a notice from the law offices of  John Barth, of Hygiene, Colorado to the Chaffe Board of County Commissioners, and Chaffee Planning Director Dan Swallow. Interestingly enough, the notice did not include the county attorney’s office.

In it, the group issued a set of complaints; in their view, Chaffee County has failed to follow the required permitting procedure for issuance of a 1041 permit. The group’s basis for that claim; that the county plans to review a draft of the proposed 1041 permit and conditions at the upcoming July 20 BoCC meeting, but that it hasn’t yet made the document available. It also issued its own set of permit conditions.

The UPCCW group takes the position that since the BoCC hasn’t yet made that draft available, the failure to do this constitutes a violation of the law. Further, it claims that the county violated the law by voting to approve the issuance of a 1041 permit for the project, before considering a draft proposal of the 1041 permit and conditions. 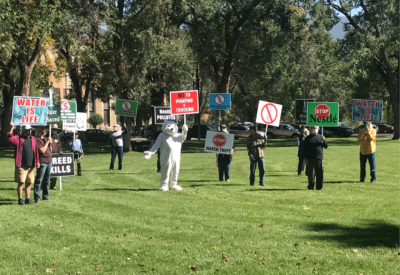 Unbottle protesters gathered earlier this year in Thonhoff Park to express their disapproval of a renewal of the 1041 permit. Ark Valley Voice has received word that they plan another protest for July 20 when the BoCC will review a first draft of both the permit and conditions. Photo by Brooke Gilmore.

That permit allows the company to pump spring water from Ruby Mountain Spring, on property Nestlé owns in Chaffee County, transfer it to its pumping station in Johnson Village, then trucking it to its Denver bottling plant.

The notice goes on to state that the county didn’t reopen public comments during the last session (this, after multiple public sessions with the most extensive public comment ever held in the county on a proposal, and formal notification of the process laid out to be followed). The group’s complaint; that by not specifically seeking their input on the language of the 1041 permit conditions as it has been drafted, that this also constitutes a violation of the law.

The document also cites numerous state statutes for what it claims; then makes an assertion that it is their perception that Chair Greg Felt has a conflict of interest that should have prevented him from ruling on this. In fact, in what many will consider an audacious request, it asks that the BoCC’s July 6 decision to approve the permit be rescinded and that Mr. Felt recuse himself from the proceedings.

Felt has addressed the issue of conflict of interest not once, but twice during the proceedings. While the protest groups make reference to his role as the Vice–Chairman of the Upper Arkansas Water Conservation District (UAWCD) it’s stated as a perceived conflict; the mission of the UAWCD is to secure and manage water resources to meet the needs of the Upper Arkansas River Valley.

During their July 6 session, following the 2 to 1 vote on the permit, which ended months of lengthy questions and debate, the BoCC openly discussed the necessary timing to proceed with a new 1041 permit, and the development of what will be complex conditions.  They pushed county legal, which was concerned about the tight timeframe, to get a first draft ready for them to review in the public meeting on July 20, which they explained would be the beginning of the permit development public process.

Once, or if, the BoCC finalizes a written resolution containing the conditions of the permit renewal,  the issuance of that resolution and written 1041 permit will trigger the statute of limitations for any challenges to the BoCC’s actions under Colorado Rule of Civil Procedure 106.