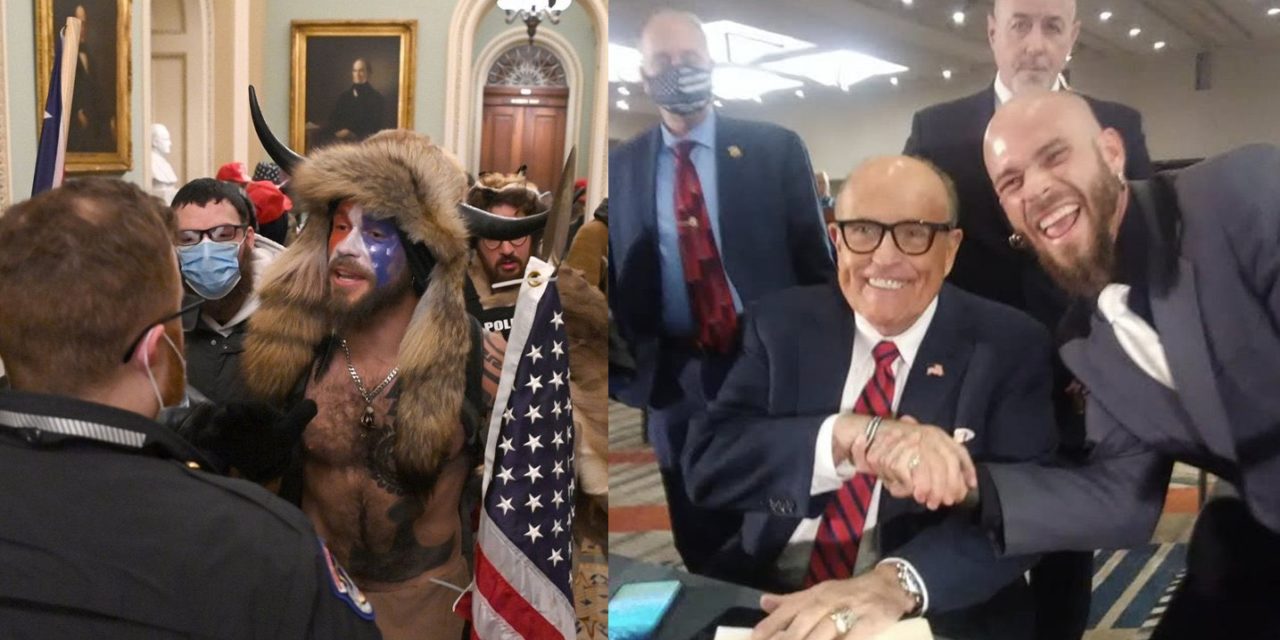 In yet another affront to our democracy, and to those with legitimate civil rights concerns, Trump supporters are attempting to pass off Wednesday’s mob insurrection at the United States Capitol as something done by [their words] “the real enemies of democracy, Black Lives Matter protestors and Antifa.”

This surreal-reality show claim comes right from the top. That they are assigning their own blame on others is hardly surprising, because for years now, this has been a signature move by President Donald Trump and his cult-like supporters; blame others and take no responsibility for their actions. That it is so predictable seems to escape them. It’s as if, like children caught red-handed with their hands in the cookie jar they whine “not me, I’ve never stolen any cookies — it’s Bobby, or Ishmael or Leticia. They’re the ones stealing the cookies.”

The denials are playing out not just across Republican and Patriot social media pages in contrast to the blatant images in which they appear to flaunt their identities. Their guilt comes through from Trump supporters in the mob, who actually said “They’re shooting at us, they are supposed to shoot BLM, not patriots.”

Our Ark Valley Voice sources tell us they are also filling the murky social media pages of alt-right militia groups, such as the Front Range Three Percenters. There, multiple posts claim that the outrage coming back at Trump supporters from yesterday’s assault on the Capitol is wrong. A post on the Front Range Three percenter group (confirmed by AVV) irrationally declared that blaming them was “a declaration of war against our constitution.”

The featured  image in this article is telling: The president’s lawyer Rudy Giuliani, who incited the crowd at the Trump rally that preceded the insurrection at the Capitol surrounded by some of the people identified as Capitol insurgents; including behind him  Bernie Kerik and  far right (sans his face paint and horns and in a suit and tie), Jake Angeli, known as Q Shaman, one of the instigators behind QAnon.

According to a Newsweek article “In February 2020, the Q Shaman gave another address to a crowd at a pro-Trump rally in Phoenix, holding a “Q sent me” sign.

“The snowball has been rolling and it’s only getting bigger,” Angeli said, reports Arizona Republic. “We’re the mainstream now.”

This isn’t just a national story; the disinformation is being perpetrated here in our state and in Chaffee County.

A Jan. 7, 2021 Facebook post by Chaffee Republican Dennis Heap, is one of several suggesting that “Antifa”, not Trump supporters, staged the insurrection at the United States Capitol on Wednesday. Several of his posts are being fact-checked and blocked by Facebook.

In veiled language, the Front Range Three Percenters appear to be in the initial planning stages of meeting to “do what they have to do to save democracy.” They are using militaristic operational language, saying the same sorts of things that we at AVV have seen for months; that while they’ve been the peaceful ones, that “the time has come to take up arms to save our democracy”.

That this is demented and their proclaimed innocence is an outright lie should be obvious. But that prominent Republican party members are giving them cover is obscene. Prominent Chaffee County Republican Dennis Heap, who appears to also be a member of the Chaffee Patriot group AVV reported on last summer has perpetrated the lies. While he says he is speaking on his own behalf, he continues to claim that the mob that attacked the Capitol “must be Antifa” (which isn’t a real thing by the way) and “anyone can wear MAGA hats”.

A commenter on this AVV story about the insurrection repeated the claim that what Trump supporters did was a “peaceful protest” … “How do they even know who the Capitol rioters even were? Antifa can carry a flag and wear a MAGA hat.”

Thursday afternoon it got worse, when Chaffee County-based Heart of the Rockies Radio did an on-air interview with newly-elected Colorado Dist. # 60 State Representative Ron Hanks, who says that he went to Washington for what he called an event with “refined, well-behaved, nice people.” 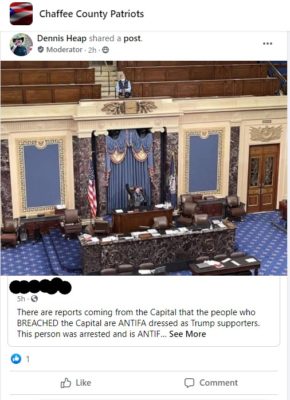 According to Hanks, they were gathered near the Washington Monument and then the group started making their way down to the Capitol. “By the time we got there, it was clear that there were ‘plants,’ not any of the Trump supporters but these masses of individuals who somehow appeared out of nowhere to cause trouble.  They sure got there fast . . . I was near the front of the thousands coming from the Washington Monument and all the trouble had already started before we got there, so these weren’t the peaceful Trump supporters; they came from somewhere else.”

According to Hanks, “I talked with a young girl from Kenya who told me she felt nothing but love from all these people and that we were being portrayed badly by the media.  The election was fraudulent, it’s going to come out, and I’m worried about where our country is headed.”

Reached for comment about the posts he has done in the past 48-hours, Heap reiterated that his statements were his own and not the Chaffee County Republican Party. But he continued to support a theory that has already proved false: that “Yesterday was not the responsibility of Trump supporters, but of “Antifa” — that is my OPINION!”

But the private Chaffee Patriots page is a completely separate thing, including hundreds of members. Two sources have shared posts from that group, by Heap, expressing the same attempt the shift the blame for the insurgency from Trump mob to their normal targets — BLM and “Antifa”. 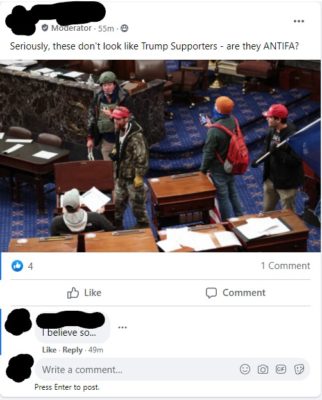 Thursday afternoon, information generated by Heap electronically included a detailed list originally put out by the Colorado Democratic party; of how to influence future elections that resulted in Heap’s conclusion that “it is time for a grassroots effort, Chaffee County Patriots must Own Chaffee County,” whatever that means.

While Heap did say that “I absolutely condemn the violence and the threat to our legislators!” he went on to ask the writer, “Did you accept the 2016 election that Donald J. Trump won the election or were you a part of the four-year harassment and bullying with the Russia Hoax?”

“I am a law-abiding American citizen who believes that election integrity is an absolute to our Republic and although I do believe that the election was rigged and should not be certified legally, it was, and I accept that Joe Biden is the president-elect.” But again, he stressed that “this is MY OPINION,” inferring that perhaps there are others who don’t agree with him.