The Chaffee County Sheriff’s Office, along with the Salida Police Department, the Buena Vista Police Department and the Colorado State Patrol reported that around 10:30 pm. April 18, they responded to a report of a car jacking at Hwy 285 and CR 270. The incident began as a one car accident, and turned into an assault of people who stopped to try to help, and progressed to a car jacking. Three suspects were ultimately apprehended by San Luis Valley law enforcement. 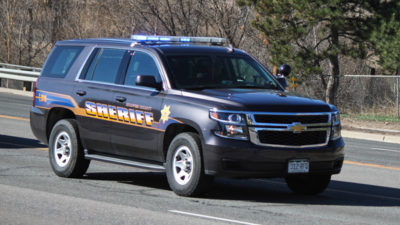 According to Sheriff John Spezze, “When deputies arrived they learned that two motorists in separate vehicles stopped to help three unknown people who had been involved in a one car accident at that location. When they stopped to help, they were met by a party in possession of a weapon. One of the motorists was able to drive to safety, however the second motorist was held at gunpoint and then pulled from his vehicle and physically assaulted. The victim was able to escape and the three unknown suspects fled in the victim’s vehicle.”

The suspect’s vehicle involved in the accident was found to be a stolen motor vehicle out of New Mexico. Chaffee officers searched for the suspects, however members of several law enforcement agencies in the San Luis Valley spotted the suspects and the vehicle.

A pursuit ensued and three suspects were eventually taken into custody and taken to the Saguache County Detention Facility.

The suspects were identified as:

According to the Chaffee County Sheriff’s Department, all three suspects face charges out of Chaffee County ranging from First Degree Assault, Felony Menacing and Aggravated Motor Vehicle Theft. They also face numerous charges in regards to the motor vehicle accident, the possession of the stolen vehicle out of New Mexico as well as the high speed pursuit.

The victim of the assault was transported to HRRMC in stable condition and the person’s identity has not yet been released.