Chaffee turns out for ‘Together Chaffee’ Drop-ins 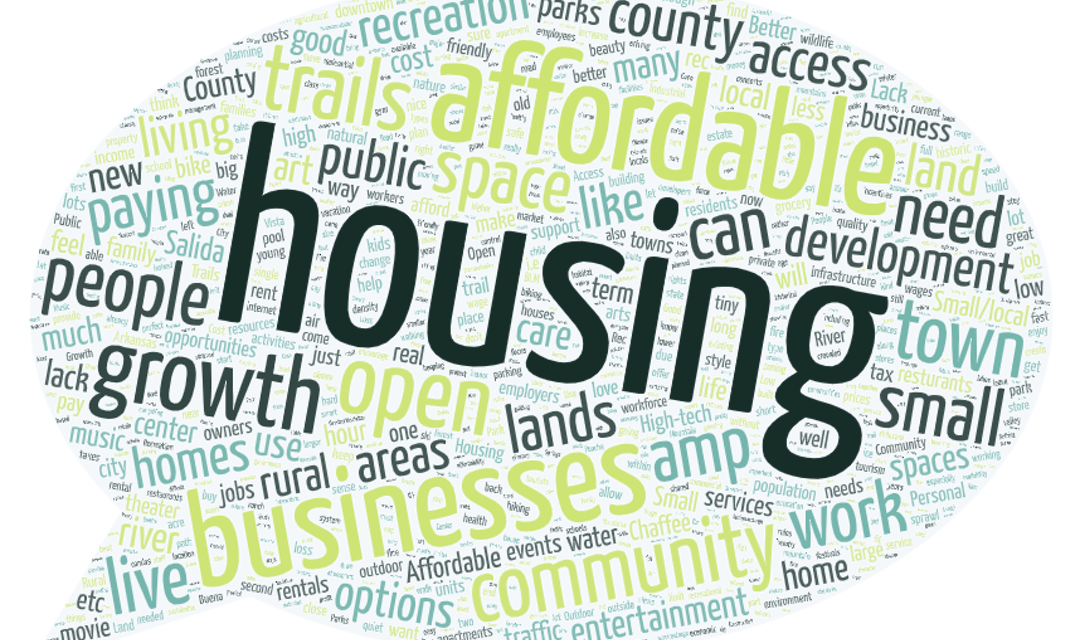 If community turnout at the two Together Chaffee Drop-in events this week focused on the first draft of the new comprehensive  plan in Salida and Buena Vista is any indication of interest, then Chaffee is representing itself well. A visit with the consultant group working with county planners and the Chaffee Planning Commission on the plan reveals how impressed they are with resident involvement.

“The involvement here is incredible” said Cushing Terrell’s (formerly CTA Architects Engineers) Nora Bland, who compiled the results of the recent community survey. “We had 413 responses to the survey, and on a similar project in Basalt, we got only 300 responses. That’s a sign of heavy involvement here.” 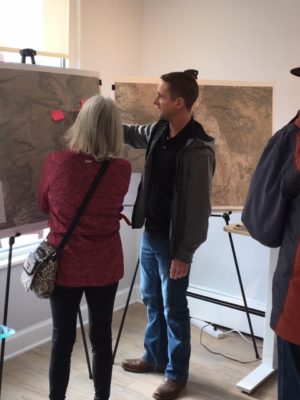 Consultant Dave Dixon answers a question for a resident during the Together Chaffee Drop-in session in Buena Vista. Photo by Jan Wondra,

The two drop-in events this week at the Scout Hut in Salida and at the former Watershed building in Buena Vista saw continuous traffic each day. The drop-ins weren’t for just a few minutes – Cushing Terrell Project Lead Wayne Freeman and Project Manager Dave Dixon said that most people stayed for a lengthy time period, explaining their concerns, and asking questions.

“In other communities we haven’t seen this much turnout. At almost every event the audience is growing. I think the word is out now especially, because we’ve published the first draft of the comp plan goals and objectives,” said Bland.

Dixon confirmed Bland’s assessment. He noted that the Together Chaffee County gathering in Salida at the Scout Hut had drawn more than 60 people. Stopping by late afternoon, the visual aids were covered with sticky notes, and county maps were covered with comments.

Asked about the words that describe the key findings surfaced so far, Freeman was concise. “It’s housing, no growth – which is really managing growth — and ‘keep the open space.’” 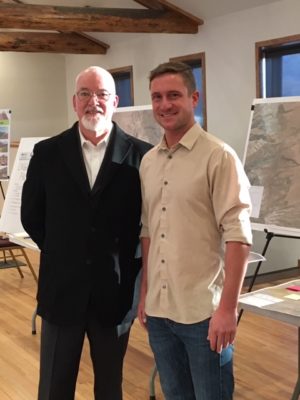 Ken Matthews, who hosts the housing program on KHEN radio stopped by the Together Chaffee Drop-in in Salida, shown here with comp plan project manager Dave Dixon, of Cushing Terrell.

“The beauty of these drop-in events is the one-on-one conversations we get to have with regular people,” said Bland. I went through every single survey that was returned because it’s my job to analyze the data. I’d say I don’t think people are anti-growth. People here get it that the state is growing. They understand that they live in a beautiful area where people want to live and they know we have to grow. But they want to do it sustainably. It’s smart growth.”

An interesting aside from Bland positions what might become an interesting public debate regarding the Nestlé Water 1041 state re-permitting process, now scheduled for review in Jan. 2020.

“The engagement in terms of land use is strong. The community is particularly concerned with water and water rights,” said Bland. “Those people who are raising it during these comp plan meetings are very concerned about sustainability and we heard a lot about it from the sustainability session. Saying Nestlé is like saying Voldermort*.”

Not only is the county encouraging county residents to go on line and see the flow of the process, continuous comments are encouraged. In fact, said Dixon, to encourage more public input, the process might be slowed down a bit in Jan. 2020, to make sure that voices that have not yet been heard are given more time to weigh in. More information about the Chaffee County Comprehensive “comp” plan is available on line: https://together.chaffeecounty.org/about .

*Note: Voldemort is the archenemy of Harry Potter, in J.K. Rowling’s books, who according to a prophecy has “the power to vanquish the Dark Lord.” Nearly every witch or wizard dares not utter his name and refers to him instead with such expressions as “You-Know-Who,” “He Who Must Not Be Named,” or “the Dark Lord.”