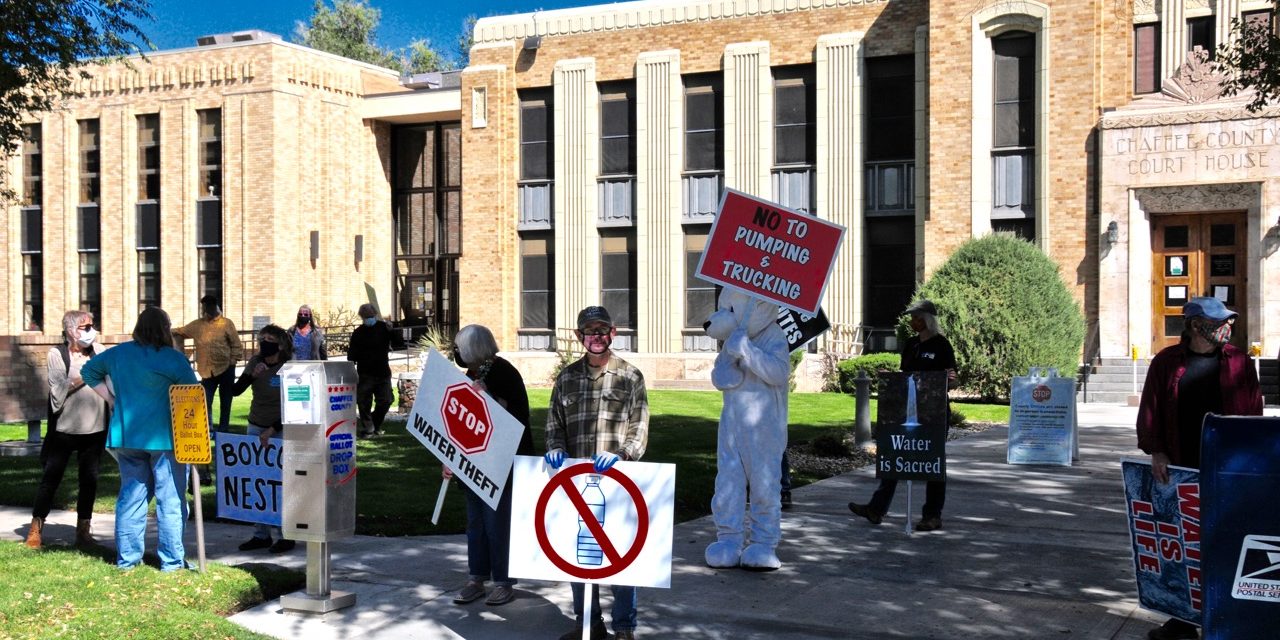 Editor’s Note: This is the fourth in a four-part series on the Nestlé Waters North America (NWNA) 1041 Permit Application. Public hearings on the permit are scheduled for Oct. 20 and Oct. 22.

As public hearings on the Nestlé 1041 permit with Chaffee County approach this week, Ark Valley Voice sampled some past arguments, pro and con from officials and residents. More will certainly be aired during the hearings Oct. 20 and 22 at the Chaffee County Fairgrounds.

Keith Krebs, head of the Collegiate Peaks Chapter of Trout Unlimited (CPC-TU), which was involved in the original permit design process, wrote in February of 2019 in favor of permit renewal, subject to several conditions.

One condition; a lot line adjustment between the Nestlé property and an adjacent landowner, which he said Colorado Parks and Wildlife also supported, in order to better protect Nestlé’s water supply and springs “and facilitates the potential expansion of the reclamation project (at the former Hagen Fish Hatchery). CPC-TU sees only positive outcomes with the lot line adjustment, including providing more river access and opportunities for enhanced wildlife habitat. NWNA is in process of creating a large conservation easement for the entire NWNA site.

Among the recommendations, Krebs suggested: “… Signs should be installed describing the habitat improvements NWNA has made for wildlife, fish along with other information of local flora and fauna. Additional rehabilitation/reconstruction of the area to the south of the pump houses would be a positive and preferred action. There should be input from riparian area restoration experts and an aquatic biologist regarding the possible reconfiguration of the ponds and reconstruction of the old ditches into meandering streams with features to hold fish and to potentially provide spawning habitat.

Also part of their recommendation: Use by anglers and birders should be enhanced by reconfiguring the steep slope from the river edge up to the level bench at the top to include an intermediate terraced path to direct and control visitor movement and river access. NWNA should collaborate with Chaffee County Road Department to achieve the best rebuild of CR 300 along the one-lane section adjacent to the southernmost pond that will be significantly impacted.

Although the reclaimed area would remain closed to the general public, the CPC-TU says that provision should be made for special use access by groups such as Colorado Mountain College, CPC-TU, Greater Arkansas River Nature Association (GARNA), and other approved groups for educational purposes on watershed restoration, fish habitat and behavior, wetlands (Big Horn Spring) purpose and so on.”

Some of these suggestions have been undertaken.

John Geyer of Avalanche Energy wrote in September: “My wife, Michelle L. Geyer, and I as residents of Chaffee County feel that the Nestlé’s Bottled Water Operation is a Beneficial use. We voted on this once and now out of towners (The Story of Stuff Project from California) and a small but noisy group of new locals want to change it. We feel Nestlé’s Bottled Water Project is a Beneficial use and their permit should be renewed.”

Larry Lawrence, Nestlé Water North America Natural Resource Manager, reviewed the original agreement with Chaffee County to pump water from the Ruby Springs site and to agree to replace the water that feeds the Arkansas River.

He said water is not an ‘extractive industry’ like mining. “Water withdrawal is replenished withdrawal, not extractive – it’s not like we’re mining gold and it’s never going to be replaced, this is water that is replaced, and so we have the ability to study this over a period of time to determine what its sustainable yield is, and so that’s where we start,” he said.

“Not only did we meet the requirements of the 1041 process, but we also agreed to 44 additional conditions that we were to adhere to, and we adhered to those conditions for 10 years; actually now, over 11 years,” Lawrence said.

On the topic of whether a shorter permit period would be acceptable, say three years, Lawrence said he be willing to hear someone’s reasoning behind why they would want to do something different with regard to the extension, but hasn’t heard any.

“In 10 years, we’ve performed extremely well – I would put our record up against anybody’s as far as the ability to adhere to permit conditions, as an example of true performance against those permits,” he said.

He pointed out the first hearing on the extension process was to be October of 2019, and he’s attended a total of four hearings on it to date, “not one person has said anything that we’ve done wrong.” 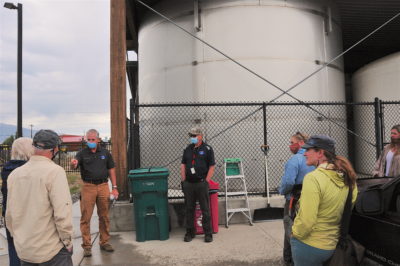 Lawrence and Nestlé personnel hosted site visits in late August for members of the opposition group and others to see the nature of the operation at the pump houses and the pumping station in Johnson Village near the intersection of U.S. Hwy 285 and U.S. Hwy 24.

“We understand that people have different views of our businesses and many other businesses for that matter, and we’re transparent, you know. We don’t think that everybody going to necessarily love us, but at the same time we want people to understand that we run a very good, sustainable operation, and we can be proud of that,” he added.

“I can’t understand why somebody would look at Ruby Mountain Spring today, and compare it to the old fish hatchery and say that we’ve done something bad,” added Lawrence.

“I think we’ve done a tremendous job and I would remind you that every drop of water — including evaporation calculated from the site — it’s replenished through our agreement and through the permitting process,” said Lawrence.

There will be discussions during this week’s 1041 public hearings on Nestlé’s performance regarding 1041 permit conditions; regulations requiring monitoring wells, past performance, any plans to take a higher volume of water from the spring aquifer (as it is entitled to) if an extension is granted.

Lawrence was asked if legal challenges would be considered if the county denies the extension. (The permit extension process has been extended multiple times since Oct. 2019 and is currently extended through Dec. 2020) He indicated they would seek definition on the decision, and explore options but could not say what legal paths the company would choose.

Several issues regarding the specifics of the permit and broader environmental concerns have been raised.

Robert Parker, head of the environmental group 350 Central Colorado, working with the Nestleave: Unbottle and Protect Chaffee County Water, wrote commissioners to urge denial of the renewal, citing concerns over the millions of plastic bottles being filled with local spring water. He noted their inability to be recycled locally, thousands of miles logged by the tanker trucks carrying the water to the Denver bottling plant and increased traffic on Highway 285 and the immense plastic pollution problem posed by single-use plastic bottles and more.

The school trust funds established and other donations to county nonprofits, he commented: “On one hand these are benevolent “gifts.” On another hand they have been called silly little ‘tax write offs.’

In reality this is a proven Nestlé tactic; used around the world to mute those who might otherwise oppose them, including nonprofits. (Meaning we most likely will not be hearing from them during the extension process.)

Parker continued, saying that Nestlé is not promoting the general welfare of the populace, but are in effect paying for potential opposition to be silenced. “Compare this piddling expenditure used to keep the Chaffee County residents in line to the vast profits we know they make from Chaffee County’s most rare – pure spring water. Please do not renew the Nestlé’s 1041 Permit extension.”

In September, Carol Ahuna, a resident since 1994, urged denial of the permit renewal in light of the county’s growth, implications of climate change and the environmental costs of single-use plastics, saying in part: “…changes in population growth and density over the next ten years will make it increasingly difficult to managed ‘fixed’ assets such as underground water in a way that balances the needs of residents against the income needed to maintain city infrastructure.” “… given the problems we have already experienced related to drought, rising summer temperatures and statewide wildfires, I believe it is prudent to conserve this extremely precious resource whenever possible…”

Jacqueline Allen wrote in August: “I am a resident of Chaffee County and am writing to you today to urge you to protect the values of our community as well as the health and future of our valley by protecting Chaffee County water and denying Nestlés permit extension to bottle water from Ruby Springs.”

Ronald Burns of Poncha Springs wrote in September: “Please stop Nestlé from from using our precious water and PROTECT our aquifer. Please stop this self-destructive madness.”

“Please keep this water in our basin!” wrote Resident Roger Cox.  “We need to discourage the wasteful destructive use of single use plastic bottles. Please tell Nestlé to leave.”

Carol Farren of Nathrop wrote in September: “It is not in the best interest of our county to renew this permit. Let’s put the environment before money.”

Barb Scheidegger, a 19-year Salida resident, wrote “Back in 2009 when Nestlé wanted to truck water from Chaffee County, I opposed this. They promised jobs and oversight and they had more money for lawyers than we did. Why would you allow this precious resource to be taken from our county? You have been asked to make good decisions for us as a county. Please deny Nestlé’s permit. Let’s keep Chaffee water in Chaffee County.”

Chuck Witt, a recent resident, wrote in September: “Please do not renew the water rights for Nestlé in Chaffee County. “… I came from Florida where I have personally watched Nestlé destroy natural springs in central Florida due to their bottling operations of water. In Florida they have not lived up to their side of the bargain. They have not taken care of the natural springs that they take water from. They have not given back to or helped the various small communities they have operations in. Please do not let them ruin this beautiful county.”

The two days of public hearings will include a county staff report, presentations by Nestlé and groups in opposition to the renewal including Unbottle and Protect Chaffee County Water and more citizen comments.

Note: Physical attendance restrictions are in place due to concerns over a recent uptick in COVID-19 cases. Because late breaking changes may occur, interested citizens are urged to visit the county website for information on the hearings and how to attend in person or remotely.