Charlie Forster Recognized as Chaffee County Citizen of the Community

Charles [Charlie] Forster was recognized by Chaffee County during the Dec. 15  meeting of the Board of County Commissioners for his outstanding service to the community. Commissioners unanimously affirmed the proclamation, which was recommended by the Economic Development Corporation, giving him a virtual standing ovation.

“There comes a point in the time of all citizens that they chose to retire,” began the proclamation read by Chair Greg Felt. “We proclaim that his tangible works and dedication to people, have inspired the next generation of leaders. With this we show our appreciation sooner rather than later. This is the ultimate endowment of a great citizen to his community.” 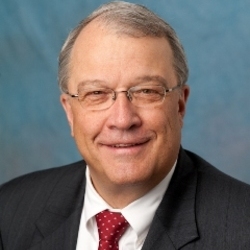 He went on to note that in addition to leading and growing Collegiate Peaks Bank as it’s former Chair and Chief Executive Officer, that Forster’s dedication has meant invaluable service on the hospital board, in helping to restore the health of the Heart of the Rockies Regional Medical Center, in the expansion of the Chaffee County Fairgrounds, and in rescuing the historic building that has become the Salida SteamPlant.

He served years on the board of the El Pomar Foundation representing the Central Peaks Region. Just in the past few years, he championed the development of Collegiate Commons, the new affordable community in Buena Vista.

Forster, for his part was reflective about the many programs and projects that he had inspired, encouraged, funded or led over the past decades. “I look back over time and I was just a focused guy and when I say today that I’m very content with where I am, I am. I’ve always said the number of days you have is far less important than what you do with those days. I’m a relatively old guy so the old horse has been here since 1985 when Salida was down in the dirt. Climax had closed, ag was difficult, tourism wasn’t anywhere near what it is today. You look where the community has come from over time … I’m proud of what I’ve been involved in.”

He reminisced about the community action that resulted in the Salida SteamPlant, saying that before that, people didn’t even go down on Sackett because it wasn’t a good place to be.  “We paid $40,000 for the SteamPlant, the garden and the site the Park Service is on. WE had no money. WE went out and raised $4,000 and I financed the rest through the bank for ten years. When the mortgage was paid off, we burned it on the stage of the SteamPlant.”

“The county-wide focus you have had for decades has helped knit us into one community,” said Commissioner Keith Baker. “When we moved here 20 years ago, it was two to three years before I figured out you didn’t live up here [Buena Vista]. I saw your devotion from the north end of the county.”

“Thank you on behalf of a grateful county,” said Felt.