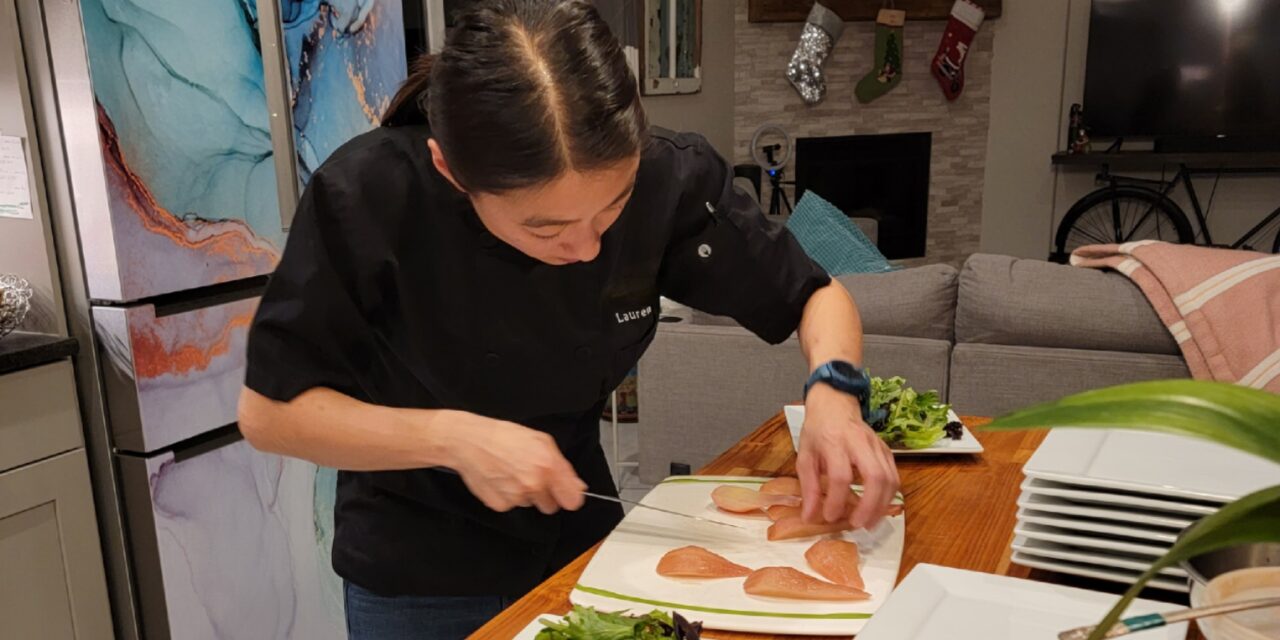 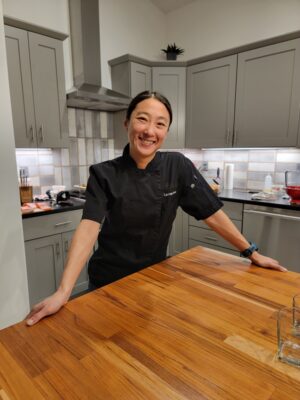 “If you’re meant to be here, you’ll end up being here”. So says Chef Lauren Hotetz whose lucky detour has now resulted in a new catering, meal prep and private, in-home dining business – Up High ‘N Hungry.

For Chef Lauren, the journey to Salida began as a child, playing as a “McDonald’s cook” in her grandmother’s basement in Louisville, KY. At age 15, she walked into a TGI Friday’s restaurant kitchen in Louisville and talked her way into her first foodservice job. Riding the “rush” of a slammed kitchen, she got hooked and hasn’t looked back.

Chef Lauren also worked with Lon Symensma (ChoLon, Asian and Leroux, European Bistro). Here, Hotetz ascended from line cook to becoming “Chef Lauren”, honing her cooking skills on a wide variety of cuisines while drawing on the business and operations skills from her earlier work.

An avid outdoors enthusiast, Chef Lauren was doing a thru-hike of the Colorado Trail, when she ambled off to Salida, in search of high-quality, (ideally hot, cooked from scratch) calories need to refuel. With convenience taking precedence and being on foot, she soon was back on the trail again when inspiration struck. What about a food truck, serving high quality, nourishing meals? Stopping at trailheads and other places where hungry hikers and other outdoor enthusiasts emerged, like bears from their dens in springtime? And what better name for the new venture than ‘Up High ‘N Hungry’?

With the idea in mind, Hotetz decided to stake out Salida as her basecamp, making a bold move from a restaurant paycheck to striking out on her own. Getting to know people downtown and in the neighborhoods confirmed that Chef Lauren had made a good choice. “It was the midst of the pandemic, yet unlike in the city, people were totally about helping each other. Free food pantries, people helping strangers, it was heartwarming to see how the community handled it- I couldn’t shake it” she recalled.

And while she’s pivoting her dream to meet emergent needs, who knows? The food truck concept may yet surface sometime down the road as operations mature, she says.

Fast forward five months and Chef Lauren’s vision refocused after locals learned “You’re a chef? – we need you here in town”. And with that, Salida is now fortunate to have a multifaceted new food concept. Building on relationships with two local commercial eateries (The Little Red Hen and Robin’s) Chef Lauren has a variety of space and equipment serving as her prep commissaries. Up High ‘N Hungry is focused on three areas: small event catering, private chef meal preparation and in-home-dining. 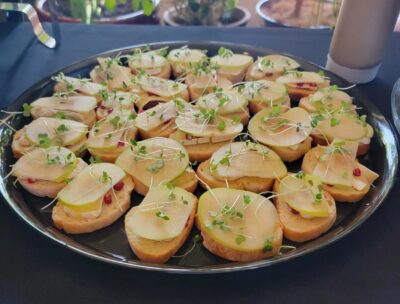 Having had a great experience with private chef service in Denver some years ago, this reporter was keen on having the concept come to Chaffee County. Flexible plans, using locally-sourced ingredients for three or more meals a week are tailored to diner’s preferences and available for pickup or delivery.

“Community-driven” menus come after a consultation with each client and the back and forth that sparks creativity. It’s a great way to add variety and relieve people from most menu planning, shopping and preparation, when they’d rather be doing other things. In honor of her grandmother’s inspiration for the kitchen, seniors receive a discount on recurring meal packages.

Private, in-home catering provides meals for “Date Nights”, special occasions and theme dinners, prepared and served by Chef Lauren. “It’s more than just the food; it’s about connecting with my clients, listening to what they want and then making it all happen”, she said. “It doesn’t have to be fancy to taste good. I am a firm believer that as long you put your heart and soul into it…you can taste the love inside. It’s a real thing”, she continued.

While Chef Lauren has current personal-favorite flavor profiles and cuisines, she did grow up after all, on Southern food, hospitality, and “foods that make you feel really good”.  She’s grown into Asian cuisine and enjoys its creativity and beautiful presentations. “I could eat Mexican food all day every day…and because I like to eat it, I enjoy cooking it too. I gained a good knowledge of these flavor profiles from the team at Los Chingones. Tacos – I’m down with that”, she said, warming up to the topic.

“Meat (cooked rare), potatoes and fish too. I was actually a fish cutter at Mitchell’s Fish Market in Louisville so I learned  a lot about their flavor profiles and how to work with them”, she continued. Noting a lack of fresh fish in local markets and limited choices elsewhere, Chef Lauren hopes to be able to source fish for those who miss that, recognizing the challenges of getting high quality seafood many miles from the nearest coast. 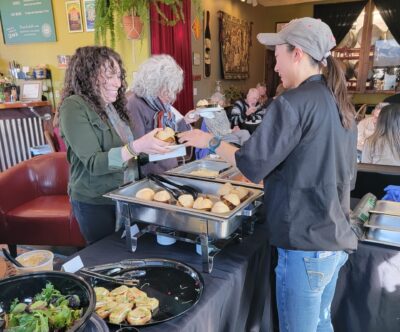 Chef Becca Henry (left) has been a huge influence and mentor to Chef Lauren throughout her years in Denver. Chelsea Meece photo

Given her wide tastes in food and all that she’s learned from her mentors, with all of her service offerings, Chef Lauren doesn’t want to be labeled or boxed in. She feels there is so much more that Salida dining can be known for. It needs to cater to locals for sure, but also expand everyone’s taste buds – that’s what keeps diners coming back for more and restaurant people challenged and creative.

And with Salida being “discovered”, people from all over the country expect both new and familiar experiences each time they return. With all this in mind, Chef Lauren prefers to be known as the caterer who goes out of her way to source locally, give back to the community, create and cultivate relationships with her clients.

Salida has an extended supply chain today, but historically was known for livestock and agriculture, a trend that is starting to come back. “Farmers and  ranchers are putting heart and soul here and  they don’t get enough credit”, Hotetz says. “I want to help and grow relationships with Badger Creek, Poncha Creek Gardens, Rocky Mountain Garlic and others. This helps generate revenue that stays in the community rather than going to the big purveyors in the city. 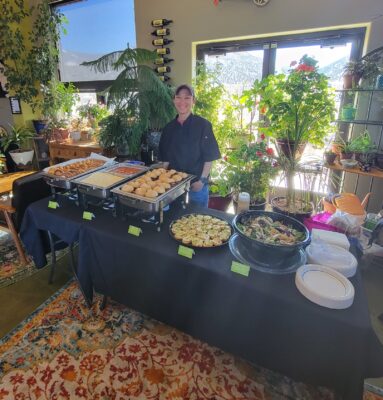 Already off to a great start, Chef Lauren held a grand opening launch party at Vino Salida on March 13. Coming up, Chef Lauren will be giving back to the community.  She’s signed up for The Alliance’s Annual Chocolate Lovers Fantasy to be held from 5:30 p.m. to 8:00 p.m., April 14 at Mt. Princeton.

Looking further ahead to September 1, she is teaming up with local food producers and other farmers and members, catering the SOIL Sangre de Cristo annual celebration at Everett Ranch in Salida. A busy season lies in between.

“With over 20 years in the business, I can’t see myself being happy doing anything else. Yes, I’m a perfectionist, but mostly I cook with love and passion”, Hotetz says. “I feel like I belong here in Salida; all this materialized for a reason. I am gung-ho and intent on leaving a stamp here – my own stamp”, Chef Lauren said in closing.

Chef Lauren Hotetz can be reached at Up High N Hungry or via Email to: lauren@uphighnhungry.com