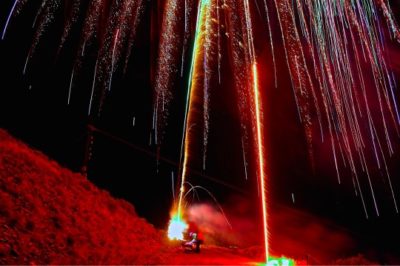 In the Salida Business Alliance (SBA) meeting on Thursday, Feb. 20, the City of Salida approached business owners with the hope of gaining feedback and brainstorming alternatives for the Independence Day firework display.

Fire Chief Doug Bess had discussed with City Council during its work session on Tuesday, Feb. 18, alternatives to a firework display this year, asking for their direction on the subject. Council advised that Bess and other City staff reach out to get community input on the firework show.

Part of the effort to reach out to the community was attending the SBA meeting and discussing what the impact would be to the business community if they were to go ahead with an alternative plan.

Bess began the conversation with SBA, asking them who in attendance enjoyed the firework display. Unanimously, the people in the room all raised their hands.

“I’ve been hammered by the community since I went to Council [on Tuesday night]. I have put a post on Facebook, and I would guess it’s somewhere between 90 and 95 percent that people want their fireworks.,” said Bess. He continued, “I was instructed by the people above me to get a feel from the community about the fireworks after what we experienced last fall [with the Decker Fire].”

Bess stated his interest in gaining feedback from business owners who were around when the firework show had to be postponed back in 2018. Representatives from SBA spoke saying that generally, people understood in that incident why the postponement had to take place.

“I hate getting rid of tradition and I think it is a really good thing, but I wanted to come here and get feedback from you,” said Bess.

He continued, “If [continuing the firework show] is the direction that the community wants to go, we will do everything we can to make sure that can still happen.”

There was no assessment of the impact of fireworks availability, should the health situation in China, where officials have literally locked down entire regions in attempts to prevent the spread of the corona virus, continue. The bulk of fireworks are manufactured in China and the economic impact of the epidemic is affecting the supply of many goods and services.

Questions were asked by those in attendance about other mountain communities and the concerns pertaining to wildlife.

Bess responded, “My biggest issue, because I feel confident with my team with wildfire, isn’t so much that, it is the issue that people have with Post Traumatic Stress Disorder (PTSD) and pets. Pets, we try really hard to promote the show well in advance and get the word out so people can go for a drive with their pets during the show. As far as the people who suffer from PTSD, I don’t quite have that answer as it is a sensitive subject.”

Chief Bess explained the time sensitivity in placing a firework order, arranging an alternative display (if that was the route the community wanted) and budgeting for the other alternatives as well. With increasing fire danger across the state, securing a drone display, laser show and even fireworks is time sensitive and requires the City and SBA to look into their budgets.

Members of the SBA overall were in favor of continuing with the firework display, but agreed with Bess, that alternatives should be brainstormed in the case of cancellation or postponement.

SBA Members gave input on some other alternatives including: a flashlight-torchlight type of display from S Mountain, a flash mob with glow sticks and a video projection.