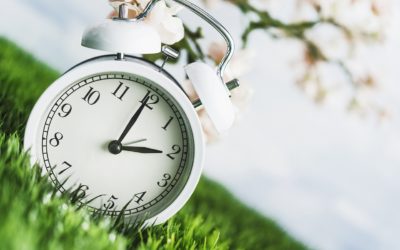 It is that time of year again, when people all across the nation participate in the practice of changing the time on their clocks ahead an hour. This year’s “Spring Forward” or Daylight Savings Time (DST) begins at 2 a.m. on Sunday, March 8 and will go until 2 a.m. on Sunday, November 1.

Why do we move the clocks ahead or back an hour? The answer is: trains.

According to the Bureau of Transportation Statistics, “Time zones were introduced by the major railroad companies in 1883 to resolve confusion and avoid train crashes caused by different local times. As the United States entered World War I in 1918, the government delegated time zone supervision to the federal organization in charge of railroad regulation—the Interstate Commerce Commission (ICC). The new concept of [Daylight Savings Time] was also overseen by the ICC to assist in the war effort. Initially introduced by Germany during the war to conserve fuel and power by extending daylight hours, the United States soon followed suit.”

The Bureau of Transportation Statistics explains, “After World War I, Daylight Savings Time was nationally abolished but allowed to continue on a state-by-state basis. As a result, confusion and collisions caused by different local times once again became a transportation issue. 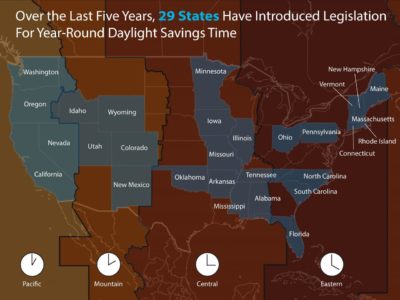 The National Conference of State Legislatures website  explains, “All states but Hawaii and Arizona (except for the Navajo Nation) observe Daylight Savings Time. The territories of American Samoa, Guam, the Northern Mariana Islands, Puerto Rico and the U.S. Virgin Islands also do not observe Daylight Savings Time. Federal law allows a state to exempt itself from observing daylight saving time, upon action by the state legislature to do so but does not allow the permanent observance of DST.”

The National Conference of State Legislatures explains that many states have passed laws and resolutions both in favor of Daylight Savings Time and against.

“Since 2015, more than 200 bills and resolutions have been introduced in virtually every state to either stay on standard time or convert to full-time DST. Until 2018, none of the hundreds of bills under consideration passed. However, in 2018, California and Florida voted to make DST permanent and in 2019, an additional six states passed legislation to place the state on year-round DST, if so authorized by Congress. Utah passed a resolution urging Congress to authorize year-round DST in a resolution but did not commit the state to do so.”