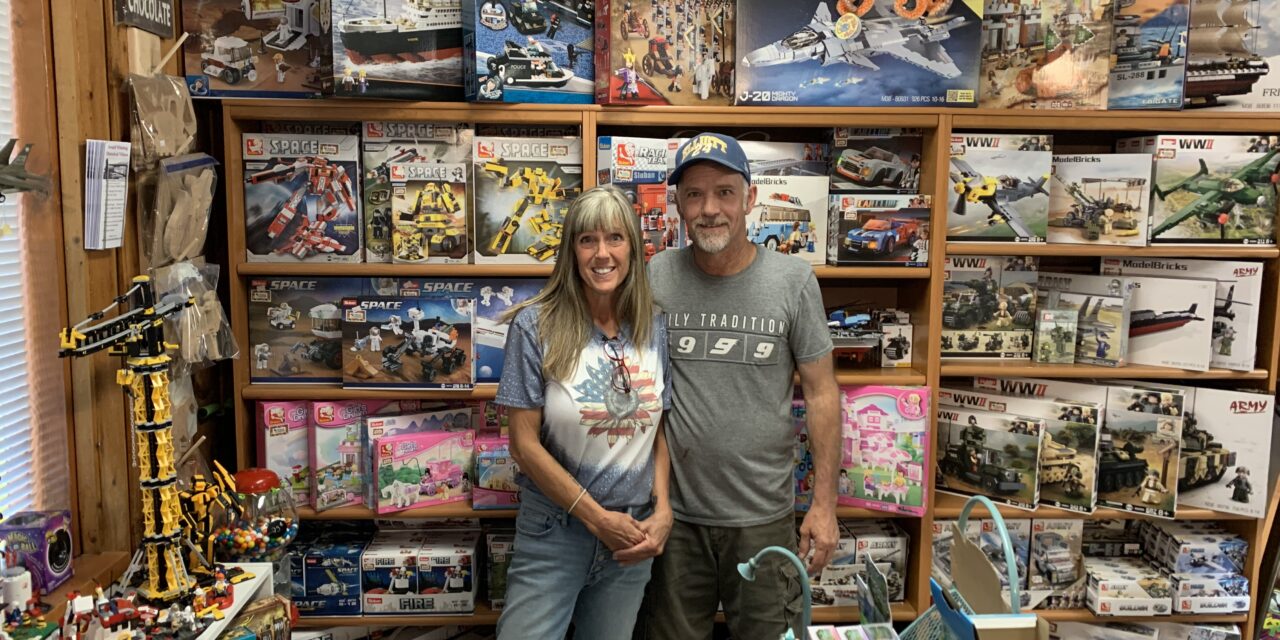 Behind the Eddyline Tap Room off Highway 24 lies an inconspicuous hole-in-the-wall that’s in the business of building joy in the community of Buena Vista (BV).

When you walk into Cloud City Toy Store you are immediately bombarded by the sight of hundreds of toys for all ages. Model airplanes and jets hanging from the ceiling. Stuffed animals crowd shelves, and a wall of G.I. Joes and actions figures old and new looks ready to march.

In the middle of the floor is a Duncan yo-yo stand stocked with yo-yos of every color and kind.

Owned by toy enthusiasts 53-year-old Chris Wright and 52-year-old Kristel Sterling, the Cloud City Toy Store which opened its doors on August 1, 2021, is the culmination of a lifelong love of toys and the delight they bring kids of all ages.

For Wright, his love of toys began with a birthday he almost didn’t want to remember. Wright explains that when he was seven years old he thought his dad had forgotten his birthday when he came home late from work. But to Wright’s delight, his father brought home seven Matchbox construction vehicles (one for each year) saving Wright’s birthday. Despite Wright’s love for cars and construction vehicles, his interests soon turned to G.I. Joes, a passion he has carried with him the rest of his life.

Wright was born in Aurora, CO and moved to Buena Vista in 1982 with his family. His parents owned The Golden Burro in Leadville, CO where more than four years ago, Wright met Sterling, who was working as a hostess. Sterling, born and raised in Southern California, had a family cabin in Eagle and often spent her summers in BV. Despite her love for the valley, it would be several decades before she would finally call Leadville her home in 2016.

When debating where the store should be located, Wright said it was a no-brainer.

“We chose BV because of the sense of community.”

When the opportunity to team up with Sterling presented itself, Wright knew it was time to take a chance.

Sterling’s artistic gifts and love of children (and toys of course!) made her a perfect business partner to fully lift the dream off the ground.

In fact, Sterling’s art is on full display in the store. Customers who enter are treated to a breathtaking, hand-painted ceiling depicting a beautiful blue sky full of clouds.

“It’s sort of a play on words because in a toy store, you can always have your head in the clouds. It’s about imagination,” beamed Sterling.

Despite the joy of running a toy store together, Sterling admits they had a little extra help.

“The very first month we knew ‘BAM!’ we’d hit it. We’ve got God backing us on this so it’s been a heck of a ride.”

In fact, one of Wright’s favorite memories occurred when a young boy named Hank strolled into the store and exclaimed “Now THIS is what I’m talking about!”

Wright and Sterling say they took the joy in Hank’s eyes and reaffirmed the leap of faith they took to open Cloud City Toy Store. Sterling, otherwise affectionately known as the “Kid Whisperer”, is finding making children smile isn’t such a bad way to make a living.

“I just love kids. I couldn’t ask for anything more than to be around kids all the time”, Sterling said with a big smile.

However, Hank isn’t the only one who feels at home within Cloud City Toy Store. Former teacher and resident of BV since 2009, Jeff Forst, otherwise known as “Mr. F” inside his classroom, finds Cloud City Toy Store reminds him of the best parts of his childhood.

“It’s nostalgic and it brings back feelings of childhood happiness. The toy selection includes my most favorite from my childhood, including particular items from my childhood Christmas and birthday lists, so I buy them,” said Forst. “Regarding Chris and Kris, I have built a friendship with them starting with our conversations about our favorite toys and growing into just regular, friendly topics as I pop in to ogle the toys I want — as we just hang out.”

Forst says the friendship he has built with Wright and Sterling while reminiscing about toys, past and present, is often a bright spot in his day. He believes the joy and chemistry between Wright and Sterling is the core of why Cloud City Toy Store is quickly becoming a destination for dreams, joy, and laughter for children of all ages.

Despite making a living bringing happiness to others, Wright and Sterling make sure to get their kicks in as well. Apparently, Wright has a habit of hiding his favorite toys throughout the store hoping that they won’t get sold right away. Sterling says that whenever Wright is away from the shop, she hunts down Wright’s hidden treasurers and puts them back on display for all to see, proving that it’s truly hard to resist the urge to play around while working in a toy store.

To supplement in-store toy sales, Wright planned on downsizing his vintage G.I. Joe collection by selling the toys online. However, things didn’t quite go according to plan.

“Instead of my collection getting smaller it’s grown by leaps and bounds. This whole thing backfired on me,” Wright said with a chuckle.

Despite dealing with slow seasons, difficulties restocking inventory, and the growing pains of starting a small business, Sterling says the signs are undeniable that she and Wright are in the right place at the right time.

“This store from start to finish has been one God-wink after another.”

In addition to selling toys, Wright and Sterling have made it a point to become active community partners within BV by recycling old and broken bicycles that are donated to them. After fixing up the bicycles, Wright and Sterling give them away to children and adults alike, refusing to accept any form of payment in return.

“I want to cater to the kids that won’t ever have stuff,” Wright said with conviction.

For those with questions about old vintage toys that might happen to be filling the attic or to explore gift recommendations for that special child (or adult), a stop at Cloud City Toy Store might just provide the answers.

Featured image: Cloud City owners Kristel Sterling and Chris Wright pause in front of one of the walls of toys in their Buena Vista shop. Photo by Landon James.