Clucking Over the Price of Eggs

Eggs have always been a relatively cost-efficient form of getting protein into kiddos, so the past few months of rising egg prices have been a shock to family budgets, both across the U.S. and here in Colorado. Prices of eggs have gone up as much as 60 percent over the past few months, among the highest increases of any food category, leaving families to wonder what is going on. 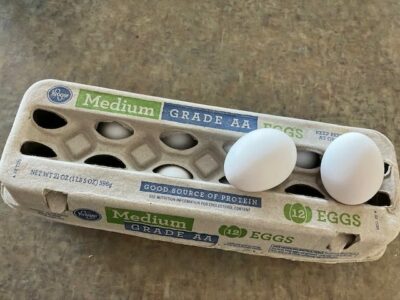 A $7.00 carton of a dozen medium eggs purchased at a Colorado Kroger-brand store. AVV file photo

Another reported more than $9.00 for a carton of a dozen and a half eggs at City Market in Buena Vista. Many Colorado groceries stores, including local, as well as national Kroger stores, have set limits of no more than two cartons of eggs per family at a time.

“What is going on,” is a combination of the outbreak of avian influenza (HPAI), also called bird flu and other rising production costs. The last time the nation saw an outbreak of bird flu was in 2014-2015, but then we were still coming out of a major recession and egg prices didn’t see the current price inflation.

The highly contagious virus began in wild birds last February and has spread to agricultural flocks. It is often fatal to chickens, and since the outbreak, more than 57 million birds in backyard flocks and large commercial operations have had to be destroyed.

Lately, a frequent shortage of eggs exists at Natural Grocers in Salida. A few 6-packs of organic, free-range eggs left at $3.15 on Jan. 24, 2023. When available, the limit is 2 cartons per customer. Merrell Bergin photo

Translated into numbers impacting consumers, this means that around 44 million laying hens are no more; decreasing the domestic supply of eggs by around 7.5 percent per month since the outbreak began. According to the U.S. Department of Agriculture (USDA), replacing the flocks of laying hens after facilities are sanitized takes four to five months.

How many eggs does a good laying hen lay? (No joke — this is a production question.) According to the USDA, a healthy hen lays around 24 eggs per month. So it appears that we are in for a continuing egg shortage until April or May of 2023.

How Much Protein Is in One Egg?

The shortages being experienced here aren’t isolated: the bird flu has hit in Canada, Europe, and South America.

While this contributes to supply shortages here, industry trade groups say the increases are also in part due to rising fuel costs, rising feed prices, and the cost of packaging (makes you want to recycle all those pasteboard egg containers, doesn’t it?). But some other agriculture production groups say (without much proof) that the largest commercial producers are driving up prices to inflate their revenue.