A recent survey of 2310 Americans in Colorado, California, Virginia, Texas, Florida, and New York explored residents’ attitudes towards online privacy and data privacy laws.  The survey was conducted by data privacy agency Incogni, revealing an unease among Coloradans over the adequacy of the state’s privacy protection laws. We are also very aware that our personal data is being sold to private companies. What to do about it is something else.

According to the findings, Coloradans are:

Laws like the Colorado Privacy Act (CPA), signed into law last year, give residents the right to opt-out of the aggregation and sale of their personal information by data brokers and other third parties. Yet 76 percent of those surveyed don’t know how to effectively remove their data from the market. 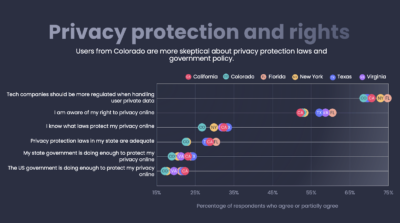 The CPA, announced on July 7, 2021 and coming into effect July 1, 2023, sees Colorado join California and Virginia at the vanguard of states with consumer privacy legislation. Yet Coloradans are the least likely to consider privacy protection laws in their state adequate (23 percent) and the least likely to agree that the US government is doing enough to protect their privacy online (18 percent).

Two-thirds of the Coloradans surveyed are aware of the fact that their personal data is being sold by private companies. This is the highest of the six states surveyed (average of 59 percent). Colorado is also an outlier when it comes to the awareness of services that can help to remove personal data from circulation: only 17 percent know of such services, significantly lower than the six-state average of 24 percent. 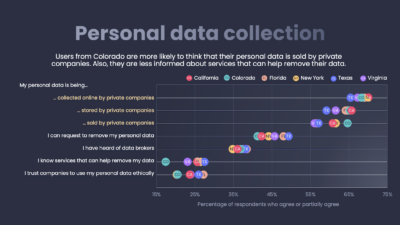 This might explain why 71 percent of respondents think that companies should be more tightly regulated when handling users’ private data. Only 31 percent claim knowledge regarding laws protecting their privacy online.

“Data privacy is becoming increasingly alarming, yet many people are still unaware of the hidden market in which data brokers operate,” said the head of Incogni says Darius Belejevas. “However, based on recent studies, the actual process of taking back data is extremely tedious. Moreover, it requires legal knowledge and a ton of persistence, which might put people off the wish to practice their rights actively.”

In the absence of stringent federal data privacy regulations, Coloradans are left with two options: approach each company that has their data individually or use a data removal service. With hundreds of data brokers registered in the US alone, it would take dozens of well-placed opt-out requests to take a single person’s data off the market. Incogni estimates that it would take 304 hours of work to complete even a single round of opt-out requests.