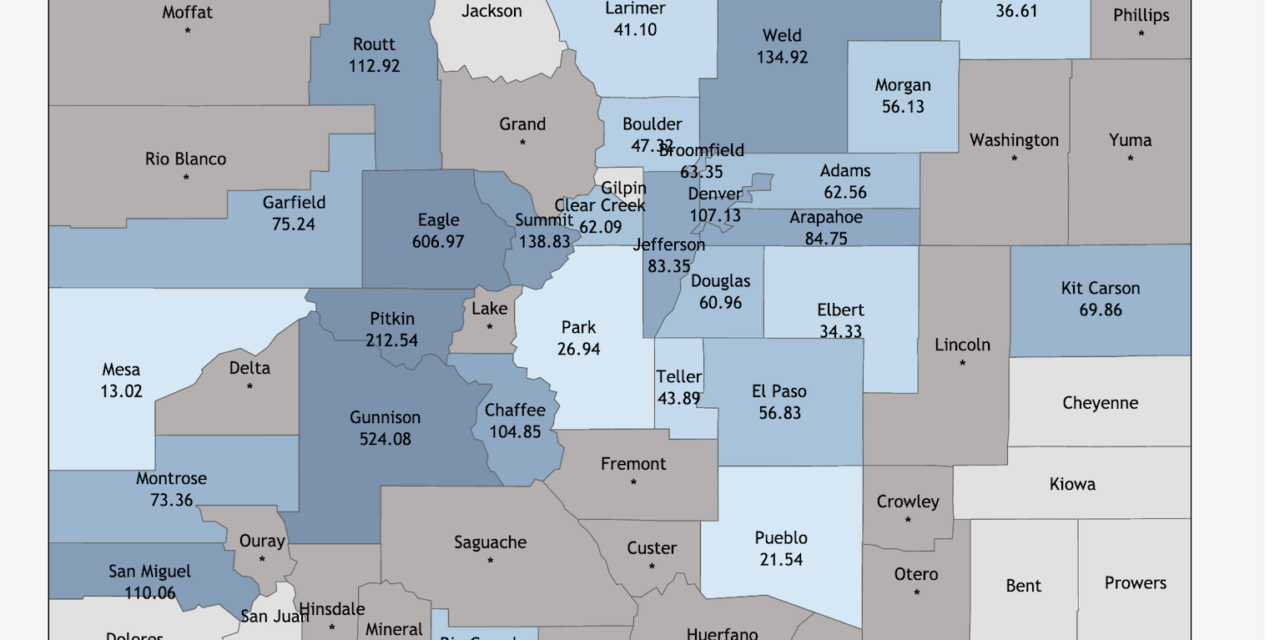 Featured graphic: From the Colorado Dept. of Public Health and Environment COVID-19 Case Data. This graphic shows the county-by-county case rates per 100,000 population. The higher the number, the more infections. Chaffee County’s rate has doubled in the past week, and it is ringed with counties having some of the highest case rates in the nation.

The numbers continue to rise, as the coronavirus pandemic known as COVID-19 continues its attack; passing one million cases globally and more than 300,000 U.S. cases in the past 36 hours.  As of 4 p.m. Saturday April 4, Colorado had 4,565 confirmed cases of COVID-19. Chaffee County had 21 confirmed cases, with several tests still pending.

The rate of hospitalization in Colorado, indicating serious COVID-19 symptoms, is running at 19.1 percent; very near the national rate of 20 percent.  The rate of positive cases, versus total tests, is also – ironically – 19.1 percent. Which means people who are showing symptoms and get tested have a one in five chance of being positive, and those who test positive have a one in five chance of being hospitalized. At last word, Heart of the Rockies Regional Medical Center had no active cases of COVID-19, although one patient there died of COVID-19 last week, and the county has had two deaths total.

The pandemic death rate, based on confirmed cases, is 2.7 percent. Because so little testing is available, that number may be artificially high because it is based on actual confirmed positive cases; a suppressed number due to the lack of test kits, especially in rural areas.

“If you think you’re going to be immune from this just because you live in a rural areas – in Idaho or Colorado, you’re wrong,” said Dr. Irvin Redlener, of the Columbia University School of Public Health Policy. Redlener is a recognized national leader in disaster preparedness and the public health ramifications of terrorism and large-scale catastrophic events. He gives a stark picture of a virus that is not going to spare anyone, anywhere. He warns that rural areas will be particularly hard hit and that “All we have right now [to fight this] is a shutdown.”

Positive cases have now been reported in 54 of Colorado’s 64 counties; a clear pattern of spread that is continuing, in spite of Governor Jared Polis’s March 25 executive order which required Coloradans and employees of all non-essential services to go home and stay home. Readers can access the full state report here.

Just as concerning as the total numbers of COVID-19 cases are the rates of infection. These are calculated based upon numbers per 100,000 population; the higher the number, the greater the spread. The rate of infection in Chaffee County (population around 21,000) is running at 104.85. That number has doubled in a week.

Chaffee County is ringed by other mountain counties with some of the highest infection rates, if not THE highest rates of infection per population – in the nation:

Confirmed cases in Colorado rose by nearly a thousand in 24 hours between Friday and Saturday. The first law enforcement officer died of COVID-19 this week in El Paso County.

The rate of infection appears to be increasing in the rural mountain counties that would normally be packed with tourists at this time of year. While health experts say that shutting down the ski resorts when Polis did surely slowed the progress, community spread  appears already to have been seeded; setting the stage for today’s numbers.

President Donald Trump, whose leadership of the pandemic response appears to have been largely absent, has displayed a punitive stance toward many of the state’s governors. They have been left with a patchwork response; attempting to obtain the needed personal protective equipment in a broken, price-gouging supply chain. Today during the daily COVID-19 public health briefing, he commented, “There will be a lot of death in the coming weeks.”